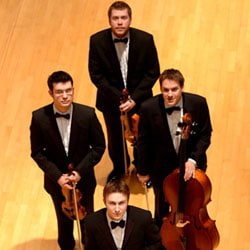 By now you probably thought you were getting the hang of our week long look at how 2012 might shape up musically – but now we’ve gone and thrown a spanner in the works, deciding to open up the field to classical and jazz artists. In classical music artists tend to establish themselves with a bit less speed than pop, so the selections here reflect those who might have been around for a little while, but are on the threshold of bigger things in the new year. For jazz the story tells itself – with British representation in the genre seemingly the strongest it’s been for years. For now though, how about these?

Yes, you read right – Damon Albarn as ‘one to watch’. As if we haven’t been doing that for 20 years already, following his career through Blur, Gorillaz and numerous profitable side ventures? Well it’s the so-called ‘side ventures’ that form the backbone of our recommendation for this year.

The London premiere of Albarn’s opera Doctor Dee, which successfully premiered at the Manchester Festival in 2011, opens at the Coliseum for ENO on 25th June. The culmination of the company’s 2011-2012 season, it forms an integral part of the London 2012 Festival. As well as this, Albarn will pick up a special awards gong with Blur at the BRIT Awards, where the band are expected to play together for the first time in more than two years, and further developments to the reformation of The Good, The Bad and The Queen can be expected, but he also has a funk supergroup, Rocketjuice And The Moon, whose debut album is expected in spring. Longtime collaborator Tony Allen is on board, as is Flea from Red Hot Chili Peppers. One of England’s most prominent musical figures is about to see his star climb higher still.

Explore more of the story for Doctor Dee at ENO

Based at London’s Kings Place, the Aurora Orchestra have the philosophy that they should appeal to as many people as possible, especially through live music. To that end their 2012 schedule looks to build on successful collaborations with Nico Muhly, with whom they are now working on a chamber opera.

Aurora Orchestra will appear at the Roundhouse as part of the Reverb Festival on 25th February, where they present an audio visual exploration of rebirth in cities, accompanied by a black and white film from Bill Morrison. They will also present the ground breaking New Moves (see trailer below), Mozart with Puppets and Brahms Re-Imagined, all part of a varied and imaginative 2011-12 season.

In addition to their Roundhouse appearance Aurora will accompany Ian Bostridge and Angelika Kirchschlager in Britten and Satie at the Wigmore Hall on 20th February. More at auroraorchestra.com.

The image of the string quartet has changed greatly over the last 20 years or so, thanks largely to ensembles like the Kronos Quartet. Yet those who concentrate on purely classical works also connect a lot better with audiences of all ages these days, and the Doric String Quartet epitomise that new found approachability.

Doric String Quartet play a short Music In The Round tour in February, performing Haydn, Schubert and Chausson to audiences in Milton Keynes on the 1st, Portsmouth on the 3rd and Warwick on the 5th. More information and music at doricstringquartet.com

Having only recently graduated from the Royal Academy of Music jazz course, young saxophonist and composer Arcoleo’s musical CV is already mightily impressive. He toured with the Kit Downes Trio in support of last year’s Quiet Tiger album and has worked with the likes of Pee Wee Ellis, Jason Rebello and Jamie Cullum amongst others.

His articulate, confident improvising and powerful sound can be heard regularly on the London Jazz Scene with a variety of ensembles. He is the first recipient of the Royal Academy’s Kenny Wheeler Prize, the outcome of which is a contract with the excellent Edition record label, who plan to release his debut album in the Spring.

Josh Arcoleo has a busy February schedule, beginning on the 1st at The Cross in Birmingham. For music head to josharcoleo.com

With one of the most exciting and unconventional line-ups currently at work on the jazz scene, Sons of Kemet are sure to generate even more interest and excitement in 2012. The combination of Shabaka Hutchings with tuba player Oren Marshall and the drumming talents of Seb Rochford and Tom Skinner (with a notable contrast between their two playing styles) makes for sometimes turbulent, always compelling, texturally intriguing music.

Sons Of Kemet play with Shabaka Hutchings at The Forge, London, on 17th February. More can be found on Shabaka’s MySpace