One For Keeps is a features series in which musicOMH writers wax lyrical on albums they’d just not be able to cope without. Here Ben Hogwood turns the clock back a quarter of a century to an album that reveals so many sides of its author – by turns funny, punchy, irresistible, scary, outrageous, heartfelt, vulnerable, and of a constantly shifting beauty… 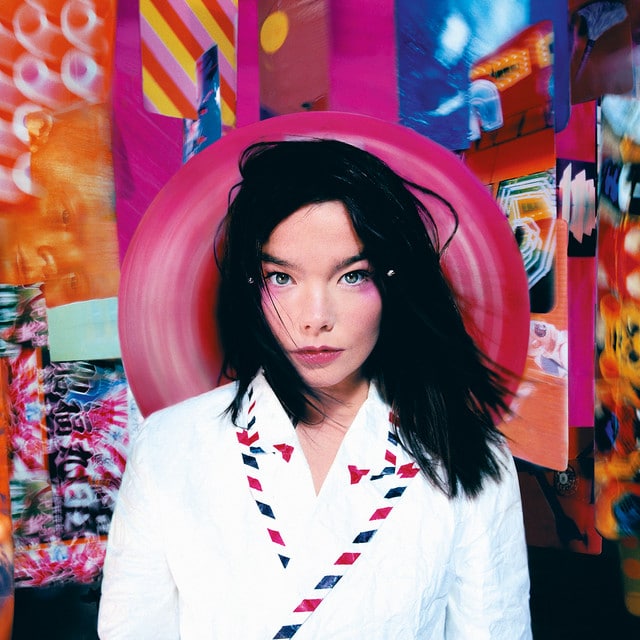 I was a late arrival to Björk. With very little exposure to The Sugarcubes, or even pop music in general, I had been on the edge of the hysteria surrounding the Debut album. Yet I was still having a problem getting to know her voice. Because of that, I’d found the furore surrounding Venus As A Boy to be a little overdone, but was beginning to thaw courtesy of the Fluke remixes of Big Time Sensuality and Violently Happy in 1994. Debut, however, continued to present itself as the album I was supposed to like, and as a result I took against it for some time. More fool me.

But when Post appeared, I was immediately drawn in by its Technicolor cover, and the singer’s ‘airmail’ jacket. Not for the last time, here Björk makes such a striking cover image. The timing, too, was prescient. I was in my final year of three studying classical music at university, and was inhaling pop and dance music like never before. Massive Attack, Portishead and Tricky had all found favour, thanks in part to a regular Björk collaborator, Nellee Hooper, so the stage was set for her. And like these three big hitters, she too had some Bristolian secrets up her sleeve.

Her place in my hall of fame was not to be easily achieved, however, for which I entirely blame myself. Lead track Army Of Me, written with 808 State’s Graham Massey, strode forward like an anti-single. It was an arresting, striking opener to the album, but when released on its own it took a while to yield its strengths. Yet if anything shows why music needs a chance to grow, this is it – for 25 years on Army Of Me still sounds like it was hewn from granite yesterday, and is quite frankly terrifying when turned up loud. “And if you complain once more, you’ll meet an army of me!” As a show of strength, it fits squarely into the awesome category, a protest anthem in its rawest form.

Then the sound draws back, but if you have the benefit of home cinema you will fully appreciate the sonorous, booming E flat bass note that issues from the speakers to usher in Hyperballad. In terms of structure, sentiment, atmosphere and heart-softening beauty, this is one of the jewels in Post’s crown and one of the songs of the decade, and one in which Björk’s playful side reveals itself. “We live on a mountain,” she sings. “Every morning I walk towards the edge and throw little things off, like car-parts bottles and cutlery, or whatever I find lying around. It’s become a habit, a great way to start the day.” Through this decidedly quirky domestic bliss, the music is gradually building, all the while heading for its heartfelt payoff: “I go through all this before you wake up, so I can feel happier to be safe up here with you.”

The softly voiced coda leads to another nocturnal treat, The Modern Things. The second co-write with Massey, it flits between English and Icelandic, like the singer herself – suggesting modern technology has always existed but has just been waiting for its moment in the sun. A slightly understated number, it is the ideal prelude for the simply outrageous song that follows.

It’s Oh So Quiet is simply wonderful.  I wonder how many people have listened to it in a darkened room, whispering the verse then hollering the chorus at the top of their voices? To say Björk lets herself go is an understatement, ‘blowing a fuse’ and getting her big band to follow suit. It is a joyous riot, and remains her biggest singles chart hit.

Where to go from there? Since Post is turning out to be quite the genre-hopper, it is no surprise that Enjoy turns towards the fateful tread we heard on Army Of Me. This time the musical language is less threatening, though with Tricky now on co-production he ensures it still leaves a lasting and slightly ominous impression.

Post is one of those albums that fits beautifully into a two-sided format. I was still operating cassettes in its year of release, so side one finishes with the intimate uncertainty of You’ve Been Flirting Again, a nocturnal aside to camera with low-voiced strings for company. That meant side two begins with Isobel, and an extended introduction that on its own proves to be one of the album’s moments of lasting beauty. Nellee Hooper’s arrangements were working well but Björk had added Brazilian composer Eumir Deodato to her team, and he conducted the orchestra, drawing us into a sun-drenched garden of beauty. The richly scored chords of the start give way to a low-slung bass, and then our singer is back with us, telling the fairlytale story of Isobel before being borne away on swooning strings.

Possibly Maybe is next, an inward-looking nocturne that dares to dream, a one-to-one confidential with the listener. Then with I Miss You we hit the dance floor again, in the company of wah wah trumpets. Björk is hollering again and the groove is another irresistible one. The night returns and Cover Me retreats into the shadows. Rumours abound that this was initially recorded in a cave, and the flickers of harpsichord could easily suggest exaggerated and fragmented light dancing on the walls. The album subsides to a close with the vocal trickery of Headphones, the second Tricky collaboration, drawn out over a single held note and curiously hypnotic in its execution.

A standout quality from Post is the sheer flexibility of the songs, enough for some of the single releases to be made on as many as three CDs, as so many producers had turned in quality remixes of the songs. Possibly Maybe tested many a bank balance, while elsewhere remixes by Goldie (Isobel), Fluke (Hyperballad) and Massey (Army Of Me) have all stood the test of time. A full remix album, Telegram, followed late in 1996.

We return to the album itself for a final appreciation. Without doubt its Icelandic author has pushed herself to greater musical and lyrical exploration since Post, and she continues to push boundaries and make more innovations wherever she turns. All power to her elbow. But for me, rightly or wrongly, Post is the album to have when it comes to Björk. It reveals so many sides of its author – by turns funny, punchy, irresistible, scary, outrageous, heartfelt, vulnerable and of a constantly shifting beauty that is very difficult to describe, let alone pin down. In a crowded field of contenders, it remains one of the ’90s’ very best albums.