by Ross Horton
published: 21 Apr 2020 in One For Keeps
Tweet 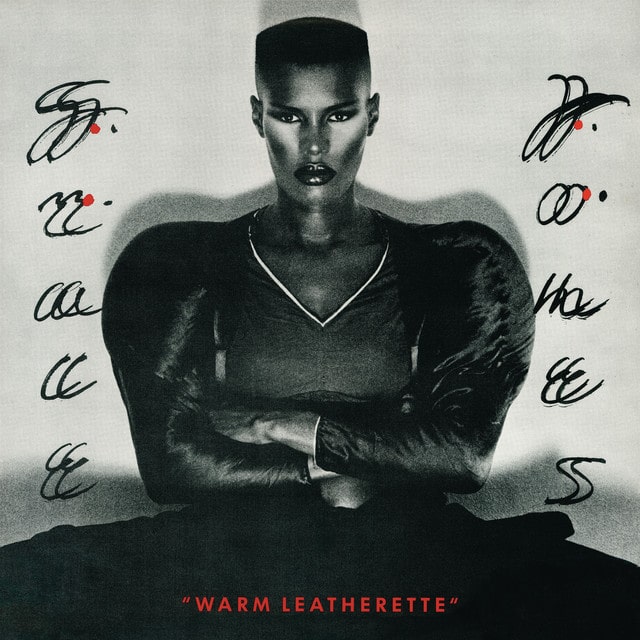 Grace Jones – Warm Leatherette: the original artwork for the 1980 release

One For Keeps is a features series in which musicOMH writers wax lyrical on albums they’d just not be able to cope without. Here, in the first of an ongoing series of discussions about albums he’d really rather not be without, Ross Horton attempts to do some measure of justice to Grace Jones’ brooding 1980 post-funk masterpiece Warm Leatherette.

I first became aware of Grace Jones when I was very young. After I had finished watching the cheesy but rather brilliant 1985 James Bond movie A View to a Kill, I was left wondering what Grace Jones was. She was, by some considerable margin, the most memorable thing about the movie. But I was confused, a little scared, and very enthusiastic about getting to the root of what she was. Was she a man or a woman? A human or an alien? Hero or villain? All or none of the above?

Watch the movie and you will see that Ms Jones is enthralling, beguiling, seductive, repulsive, horrifying – and completely, utterly mysterious. Even when her character, May Day, eventually endures the heat of James Bond’s luxurious bed, we are left in no uncertain terms as to who is in charge. She is the standout performer, far and away the most interesting character in any of the ’80s Bond movies.

That sense of power, of endless and unfaltering star power, is something that she brings to her music, but in a rawer and more electrifying way. After her first trilogy of albums, a collection of mediocre disco and genuinely thrilling funk pop, Ms Jones decided that something needed to change. Her second trilogy, a steely triptych of seductive post-funk and gloomy electropop, started in 1980 with Warm Leatherette, peaked in 1981 with Nightclubbing, and ended in 1982 with Living My Life. It remains one of the greatest trilogies in music history, and the first great three-album run of the ’80s.

“Warm Leatherette stands tall. It is a beacon, a guiding light, a sword of truth”

As diverse as they are from a sonic perspective, all three of those records have a common ‘feel’ – a sticky, rubbery, sweaty hybrid of art rock, funk, reggae, dub and post-punk, infused with seamlessly integrated electronic elements, and deeply ingrained disco rhythms. Without realising it, Ms Jones embarked a project as ambitious as David Bowie‘s Berlin Trilogy, and made music at the bleeding edge, the very forefront of what was to be in the ensuing decades.

The albums were all recorded at Compass Point Studios in Nassau, Bahamas, with the Compass Point All Stars, a surefire marker of success in the late ’70s and early ’80s. In hindsight, we can see that the Bahamas, and particularly those studios, in those years, would be a hotbed of forward-facing, revolutionary music on a scale not seen since Sun Studios first started pumping out rock ‘n’ roll in the 1950s. The Allstars were led by the now-legendary rhythm duo Robbie Shakespeare and Sly Dunbar, better known as Sly & Robbie, with Wally Badarou on keyboards, guitarists Mikey ‘Mao’ Chung and Barry ‘White’ Reynolds and percussionist Uziah ‘Sticky’ Thompson. She also had the president of Island Records, Chris Blackwell, and Alex Sadkin (who had just finished working with Bob Marley) manning the production. So on paper, at least, the album (and project as a whole) was destined to succeed.

But nobody could have predicted just how great those albums would have been, and how much they have grown in stature and influence in the 40 years since the project began. Warm Leatherette, the darkest and gloomiest record in the trilogy, stands out amongst the best albums of what was, in retrospect, a vintage year. Talking Heads, David Bowie, Joy Division, Prince, Bruce Springsteen, The Pretenders, Peter Gabriel, John Lennon, The Cure, Stevie Wonder, The Police, Steely Dan, The Cramps and many, many more were all in world-class form in 1980, with several of those acts releasing groundbreaking albums that regularly top polls of the Greatest Albums of All Time (Remain In Light anyone?)

Against this veritable sea of incredible art, Warm Leatherette stands tall. It is a beacon, a guiding light, a sword of truth. Diana Ross, Chrissie Hynde, Kate Bush and Siouxsie Sioux all succeeded in crafting excellent records in 1980, but none of them – not one – is as good as Warm Leatherette. Not a single one of them crackles with anywhere the same saturnine energy, white-hot intensity, thrilling originality. Not a single one of them takes what amounts to the entire near-history of pale male art and redefines it and refashions it into something new, something undiscovered, something dangerous.

If you need convincing, compare the two versions of Private Life released in 1980 – one, by The Pretenders, is sleek, stylish and tight. The other, by Grace Jones, is hot, heavy and unflinchingly honest, pointing directly at the direction she would take on Nightclubbing. The only problem with this comparison is the fact that Chrissie Hynde wrote it – showing that Grace and the boys were beating artists at their own game, with their own songs. As soon as Private Life left Hynde’s pen, it was Grace’s.

In fact, only one song on Warm Leatherette was written with Jones’ involvement, but this makes no difference to the eventual outcome – she consumes all of the material, she embodies it, transforms it, makes it her own. The covers – seven out of the eight tracks – are all performed as though Jones’ life depended on it. In a year where Roxy Music released their blandest, most vanilla album, Ms Jones and the Allstars took their finest single – Love Is The Drug – and transformed it, shocked it, restated it.

The version of Love Is The Drug that appears on Warm Leatherette is fast, punchy and shot through with Giorgio Moroder-esque electronics. Unlike the original, it doesn’t play around with dynamics as much as throws them out completely. The track begins with a breathless intensity, and doesn’t let up until a short reggae breakdown after five minutes, then continues on its seemingly endless forward journey. 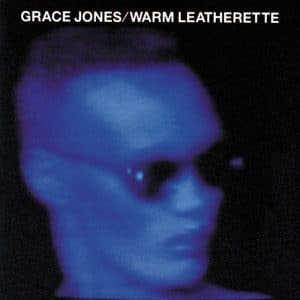 The title track, which opens the album, is a take on a song first released by Daniel Miller’s The Normal in 1978, which was an early entry into the burgeoning industrial genre, and the first release on his newly-founded Mute label. Jones’ version has swagger, sensuality and poise, where the original was wilfully stark and hollow.

Tom Petty‘s Breakdown – here with an added verse courtesy Petty himself – is glamorous, smoky late-night pop. Her take on Jacques Higelin‘s gallic pop nugget Pars is gloriously silly, as though someone had blended all of the traditional cliches about French culture and used them to paint a disturbing canvas. The original track was recorded in the same room, in the Château d’Hérouville studios, that Bowie and Iggy Pop had used when recording much of Low and The Idiot, and the Bee Gees had used to record their contributions to Saturday Night Fever – and Jones brings all of that latent power to the recording.

The foul-mouthed tirade Bullshit – which Robert Christgau once argued should have been given to Marianne Faithfull by writer Barry Reynolds – is, simply, awesome. When Jones spits the lyrics, we know she means every single syllable: “If I get tired of all those assholes/It’s alright cause’ I want them to know/I’m sick and tired of all this bullshit/Rough shit, same shit”. The music behind it is suitably odd: clanging robo-percussion, strange synth squiggles and stabs, roaring chainsaw guitars. It brings to mind a scene at the end of Alex Garland’s sci-fi thriller Ex Machina, where an arrogant inventor is killed by his own robot, and she is finally free to experience the human world for herself. You can guarantee she felt every word of this song, whether she knew it or not.

Jones’ fiery take on Smokey Robinson’s The Hunter Gets Captured By The Game is positively thrilling. First performed by The Marvelletes on their (rather fantastic) pink album, the tracks gets rather faithful, reverential treatment here. The guitars, keys, rhythm section… all electric. And her voice! Grace has always said that the thing she’s most happy about with her voice is the fact that it’s so unique that it can’t be copied, can’t be reproduced. Here, it’s nothing short of magnificent – as though the song were written just for her.

“And her voice! Here, it’s nothing short of magnificent”

The one song that she did write – with an assist from Deneice Williams, she of Let’s Hear It For The Boy fame – is A Rolling Stone, the most mainstream-sounding slice here. It’s upbeat, buoyant and bubbly pop music with a strangely polished sheen. It made absolutely no impact on the charts anywhere in the world, but it did allow Grace and the boys to experiment with a more accessible sound – something they would later exploit and perfect on tracks like Pull Up To The Bumper and My Jamaican Guy.

The album was remastered and repackaged in 2016, with extra-long and extra-juicy extras – and the difference, especially on a good system, between the original CD issue and the newly remastered one is like night and day. Personally, I’ve been listening to the ‘blue head’ cover for so long that it remains my favourite mix of the album, but the remaster is, objectively, far superior – adding a depth and richness to the record that simply had never been heard before. That is the version to pursue – if nothing else, hunt it down for its extraterrestrial take on Joy Division’s She’s Lost Control, which is one of the greatest, most fitting covers ever performed.

Grace would take the formula she pioneered here and perfect it on Nightclubbing, which is simply one of the greatest albums ever made. Living My Life is often seen as the weakest of the trilogy, but that’s only because it’s the least-heard. That too is a treasure-trove of icy cool gems and futuristic beats.

There’ll be more from me on Grace next year, ahead of her rescheduled curation of Meltdown Festival at London’s Southbank Centre. But for now, I urge you to explore, enjoy and immerse yourself in the dark pleasures of Warm Leatherette, a long-ignored, underrated masterpiece from a truly unique artist who was, 40 years ago, nearing the peak of her seemingly endless power.