One For Keeps: Paul and Linda McCartney – Ram

by Ross Horton
published: 19 May 2021 in One For Keeps
Tweet

One of the most charming albums ever committed to tape gets a 50th anniversary ‘half speed master’ vinyl repress, and reminds of the simple pleasures of intimacy 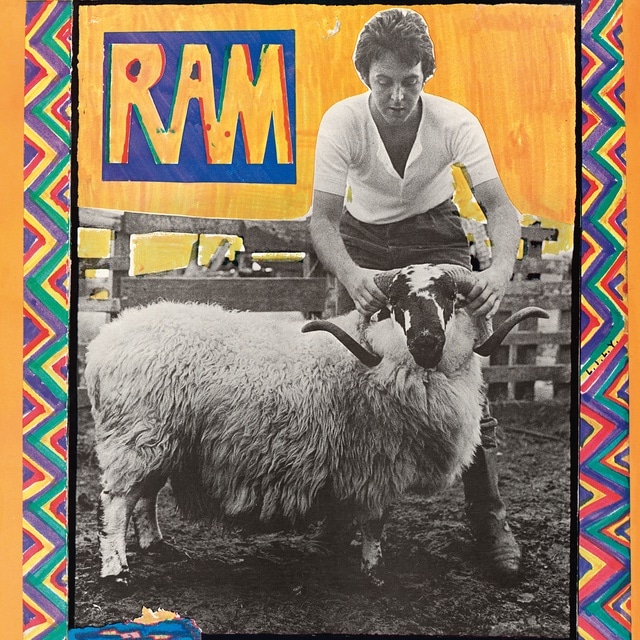 One For Keeps is a features series in which musicOMH writers wax lyrical on albums that have changed their lives. To coincide with the release of a special 50th Anniversary Edition this month, Ross Horton celebrates Ram – Paul and Linda McCartney’s love letter to home and family.

In the early hours of Sunday the 28 February 2021, six years to the day since I first asked my now-wife to be my girlfriend, my daughter Chloe was born, and a couple of hours later, at a few minutes past 6am, after I’d changed my baby’s first nappy, I had to leave the hospital due to Covid protocols.

On the drive back to our flat, feeling restless and listless, completely and utterly alone – as though I were the only person in the universe, or a single sheep on an endless field – I listened to Paul and Linda McCartney’s Ram. With the sky greyer and grimmer than any I’d ever seen outside of northern Germany, and with a wet, ominous mist hanging over the whole of Birmingham, Ram’s shaggy, kaleidoscopic rock sounded like it was beamed directly in from Heaven. It sounded better than anything I’d ever heard (despite me having heard it hundreds of times before), as though I was hearing music for the very first time, and now I sit here, three months later, and the feeling still hasn’t faded.

Ram, released 50 years ago this week, is an album that I always half-heartedly enjoyed for its lightness and whimsy, but in the run-up to my baby’s birth it seemed inevitable, inescapable, permanent and constant, and on that drive home it became essential.

It’s an album that conjures images and feelings. It’s an album that makes you think of woolly jumpers, wellies, woodsmoke, adventure, and most importantly – most importantly of all – family. It’s sticky and worn and frayed, muddy and damp and dusty. It’s the smell of the sheets in your grandmother’s house when you stayed over some forgotten evening in your childhood. It’s an album that does so incredibly much with so incredibly little, like a child drawing a blue sky on the pavement with chalk. No matter where you grew up, or how nostalgic you get about fields, there’s something about the combination of family and nature that calls to us all. Ram acknowledges this, and uses it as its central appeal.

It’d be worth noting that at this point in his career, mere months since he publicly dissolved the greatest band of all time, Paul McCartney had already received muted critical notices for his debut solo LP, McCartney. But the critics of the time absolutely loathed Ram almost as much as modern critics love it. Thankfully, I grew up in an age where we’d learned to appreciate many of Paul’s uncool and unfairly neglected solo career highlights (with Wings and without), with Ram being foremost amongst them. This was no longer a black sheep (pardon the pun), nor was it a bit of fluff, consigned to the uncool column forever. This is an album that regularly makes the lists of greatest albums ever, and has proved so influential on indie pop music that it’s actually listed under that genre on Wikipedia.

For its 50th anniversary, Ram has been reissued as a ‘half-speed master’ vinyl LP, following on from a half-speed master reissue of the debut last year. Half-speed mastering, without getting too technical, is a relatively modern trend where master tapes are reprocessed at half the speeds they would have been originally, and the records cut at half the speed they would have been originally, resulting in a far richer, more nuanced stereo field for the listener to enjoy (I think). It’s also an incredibly expensive process for the artist and label, with each issue being pressed by specialist equipment, and each production engineered by an expert – in this case, Miles Showell, whose catalogue of remastered, recut records is astonishing.

The album was pressed from a master cut by Showell at half speed “using the original 1971 master tapes at Abbey Road Studios. It was made as a vinyl specific transfer in high resolution and without digital peak limiting for the best possible reproduction”. As far as the sound of the new copy, I’ve personally never been convinced about the appeal of vinyl records outside of the enlarged sleeves (having grown up with CDs), but this new edition sounds fantastic. Even on my modest setup, there’s rich and colourful bass, crunchy and crisp vocal lines, rounded and heavy percussion, and distinct and clear separation. It sounds exactly how it should.

As for the album itself, I’d urge anyone who hasn’t heard it to stop reading this and go listen to it immediately and repeatedly. Here’s a quick run-through if you’re still unsure:

The album opens with the decidedly Beatles-y Too Many People, which is not only a fantastic introduction to the album, but also the sound of Ram. It’s a little blown-out, a little overslept, a little overeaten. It’s puffy-eyed and yawning, but not for the reasons you might expect of a world-famous rockstar. For such a colourful album, it sounds surprisingly clear-headed and sober, outside of a little caffeine and a drop of wine every now and again.

“There’s rich and colourful bass, crunchy and crisp vocal lines, rounded and heavy percussion, and distinct and clear separation. It sounds exactly how it should”

Bratty rocker 3 Legs is one of three raucous cuts on the record, forming some kind of gritty rock trinity with Smile Away and Monkberry Moon Delight (although the latter has a soulful R&B vibe tempering its rockist excesses). Conversely, the ukulele-led Ram On, and Dear Boy (allegedly written about Linda’s ex-husband, but more likely to be about John Lennon), along with Long Haired Lady, form an alternate trinity – one steeped in the baroque majesty of Pet Sounds-era Beach Boys and a sense of pre-rock innocence. All three feature absolutely perfect melodies, too.

Uncle Albert/Admiral Halsey and Heart Of The Country, undoubtedly the two most celebrated songs from the album, showcase the full extent of Paul (and Linda)’s songwriting brilliance. The former is a progressive and spacey multi-stage blockbuster, and the latter is a twee and twinkling ode to the joys of the pastoral life. Eat At Home and The Back Seat Of My Car, the songs dedicated to the joys of sex, are just as potent and powerful as the rest. They show a couple very much in love – with each other’s bodies, minds and souls – and the very simple and honest pleasure to be had in being intimate (even a little naughty) with someone you love. It’s clear the McCartneys have absolutely nothing to hide, and everything to celebrate.

Re-evaluated, reissued and reconsidered, Ram is now rightly thought of as being the most playful and influential of all of the solo Beatles albums – the ‘best’ is usually reserved for George Harrison’s titanic All Things Must Pass or Lennon’s soul-shattering Plastic Ono Band – and quite simply one of the most charming albums ever committed to tape.

If you can’t get hold of the original LP, I’d highly recommend experiencing Ram via the 2CD edition from 2012, which features a whole disc of extras, or this new half-speed master LP. That said, this is an album that will shine in any format, at any time, in any environment. Enjoy it often, and play it loud. Ram is, most definitely, One For Keeps.

The 50th anniversary release of Paul and Linda McCartney’s RAM is out now via UMe.