One For Keeps: Squarepusher – Ultravisitor 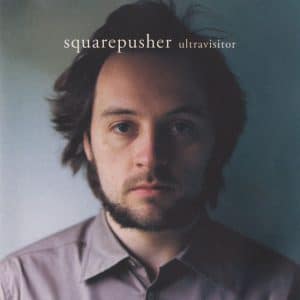 The most precocious thing I can say about myself is that, at the age of 12, I went through a pretty heavy drill’n’bass phase: lots of mid-era Aphex Twin, lots of Venetian Snares and lots of Squarepusher, real name Thomas Jenkinson. In a stroke of luck I managed to persuade my overprotective dad to get me a joint re-release of Squarepusher’s albums Go Plastic and Ultravisitor, despite the former having a track called My Fucking Sound, and while its hyperactive programming impressed it was Ultravisitor that truly bowled me over.

Jenkinson looks at you from inside the album cover, ‘stares’ being too strong a word considering the apathy on his face. In experimental electronic music at this time artist identities were either irrelevant (see the deliberate facelessness of Autechre and Boards Of Canada) or just another vehicle for grotesque imagery, as Aphex Twin used his likeness. With this context, the presentation here is surprisingly open and honest, as if the album reflects something deeper than most other music in the genre, which tended to alternate between whimsical and clinical. Well, at least that’s how it seemed to me, holding the CD in my hand on the way home.

The first thing to note is the album’s sheer scale and scope. A hefty 79 minutes incorporating drill’n’bass, jazz, musique concrete, jungle, hip-hop and baroque arrangements for solo guitar, these elements are weaved together seamlessly with intermittent crowd noise creating the impression of a spectacularly bizarre live performance. There is a sense that much of Jenkinson’s work to date culminates here, and 50 Cycles in particular contains multiple elements first heard in his previous release Do You Know Squarepusher – the compressed metallic hits of Kill Robok, the abstract poetry of F-Train – but fleshes them out and creates a track far superior to any on that album.

The titular opening track sets a swooping melody and angelic pads against speedy breakbeats that seem to break down halfway through the track, degenerating into sputtering fragments as the song climaxes. A bass solo rises from the ashes and transitions the album into a more acoustic section that lasts until the end of Andrei and features the beautiful highlight Iambic 9 Poetry. A more intense section follows, the production becoming more twisted and distorted until a bass solo in the latter half of An Arched Pathway calms things down. The final section combines the styles we’ve heard thus far and peaks with the odyssean Tetra-Sync before rounding off with two brief, gentle songs.

As an aspiring electronic music producer I was (and still am) in awe at Jenkinson’s technical wizardry. His favourite trick at the time was clearly granular synthesis as it devours the tracks on multiple occasions, turning the beat into a squealing slab of DSP. Menelec is based on complex interplay between flanging and granular synthesis, copies of the drum loop multiplying and repeating at different microscopic intervals to create shifting overtones, a feat which I could only imagine when staring at my paltry list of plug-ins.

The album has a real emotional centre too with the impossibly poignant chimes of Tommib Help Buss, which affected me particularly when I brought the CD with me on a school ski trip. Feeling isolated from the other pupils and alienated by my surroundings, the comforting soft tones brought me a solace that no actual person at the time could have, and evoked an emotional response in me that I certainly wasn’t used to from drill’n’bass’ frenetic Amen breaks.

The crucial difference between Ultravisitor and the music of many of his peers is that it is sonically, melodically, rhythmically and structurally dazzling at the same time, which is most apparent on Tetra-Sync. Squarepusher banters with an audience before launching into a  virtuosic freeform drum solo that solidifies into the track’s backbeat and is slowly altered by post-production until the hits are all digitally programmed. An atmospheric chord sequence enters, wandering its way through a tertiary key change and arriving back at its beginning, a leaping synth melody eventually joining in.

The beat intensifies, the rhythms get faster, and the bass takes over for a frantic solo. Then the track becomes cavernous, another example of Jenkinson playing with our sense of space, and a drum solo transitions the track into its slower, bass-led ending. This description doesn’t do it justice, the track truly is a journey and its subtle sonic progression is only part of the reason why. There is songcraft in abundance, pacing that makes LCD Soundsystem look like amateurs, and raw talent – all the instruments on the album were performed by the man himself.

When it comes to albums like this, that I’ve kept with me for years and have formed an attachment to, I’m conscious of how a different context might make me percieve them differently. If I were reviewing the record as the debut release from someone I’d never heard of, would I still think it was a work of intricate, nuanced genius, or would my response be “some interesting ideas but overly indulgent, ★★★”? In as far as ‘perfect’ is a useful term I wouldn’t apply it here, and I’m very aware that it’s not everyone’s cup of tea: my parents thought it was an awful racket.

At the time of its release Jenkinson said of the album “it is unknowable, and will never be understood by anybody, least of all its creator”, a perhaps over-the-top turn of phrase that nonetheless contains truth in it. The juddering abrasive stabs of Steinbolt work in my head, and I don’t know why, as do the noodly bass riffing of I Fulcrum which I would find tedious from any other performer (and that I did find tedious in his subsequent album Solo Electric Bass 1). It is more than a little baffling on first listen, and still has that effect on me at times, but with Ultravisitor Jenkinson brought his enviable talent and cinematic vision together in a way that I haven’t heard before or since.