by Steven Johnson
published: 29 May 2020 in One For Keeps
Tweet 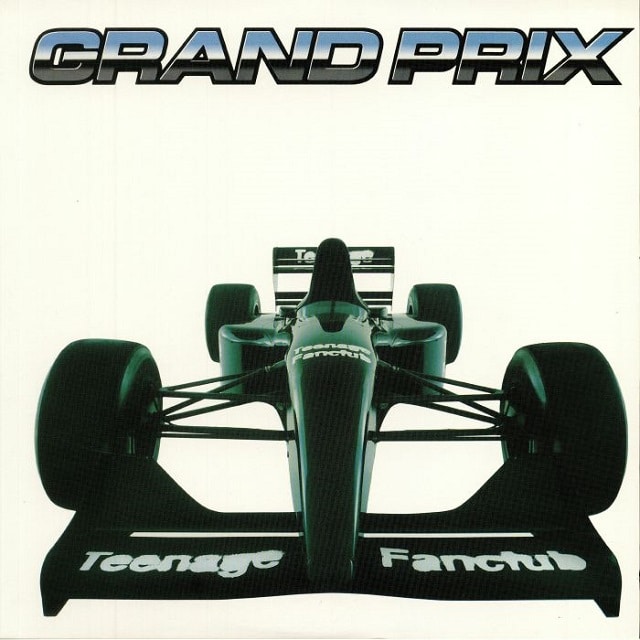 One For Keeps is a features series in which musicOMH writers wax lyrical on albums they’d just not be able to cope without. On the 25th anniversary of its release, Steven Johnson celebrates Teenage Fanclub’s glorious, career-defining fifth album Grand Prix.

Grand Prix by Teenage Fanclub is now widely regarded as one of the band’s best albums but to appreciate the full significance of it and understand how it reoriented their career it helps to look at the two albums that preceded it. Bandwagonesque, their much loved third album, was released in 1991 to acclaim, famously only being kept off the top of the NME’s albums of the year list by Nirvana’s Nevermind (Kurt Cobain spoke about how the Bellshill four piece was one of his favourite bands at the time, even). The thirteen songs on Bandwagonesque had a hazy warmth, with roughly hewn, melodic guitars and endearing lyrics that would live with fans for years. Its follow up, Thirteen, was less warmly received when it arrived in 1993. It still has some fantastic songs (Radio and The Cabbage feel like precursors to songs that would appear on Grand Prix) but overall it didn’t see the band operating at quite the same level as Bandwagonesque (even the band have expressed reservations about certain aspects of it).

This brief dip back into history feels relevant as the appearance of Grand Prix in May 1995 heralded a remarkably cleaner, more developed sound as well as a marked spike in overall songwriting standards. The melodies were more targeted, the vocal harmonies much enhanced. The sound they established on Grand Prix would largely define the rest of their career. They had found their place.

It was also the first Teenage Fanclub album where songwriting duties would be evenly split between Norman Blake, Gerry Love and Raymond McGinley (earlier albums had seen Love and Blake-penned songs dominate). The songs on the first half of the album are of ridiculously high standard, polished melodic gems seemingly never to be dimmed.

About You boldly announces McGinley as a songwriter who has found his stride, his guitar ringing pristine and true and his voice confident and foregrounded. The song shines like a beacon on the horizon and relatively everyday, middle-aged lines “take my time and I can find my way” exude more joy than they have any right to. Later on Verisimilitude he showcases the wordy, literate, alternative songwriting style that would become his signature over forthcoming years. On one hand it feels like he could be the most direct communicator in the band when he sings “I always feel the need to profane, I’ve always said fuck when I thought I could” but then he goes on to reveal a softer, self-doubting side by admitting “I only hope the verse is good, I hate verisimilitude”. We’ll come back to Raymond later on.

For now, let’s focus on Norman and Gerry, up to then the main songwriting duo of the band. It’s fair to say they’ve rarely been on better form on this first half. Sparky’s Dream is arguably Love’s most treasured song, his expertly crafted lyricism and delicate exposition of feelings reaching new heights here. Lines like “need a crystal ball to see her in the morning, and magic eyes to read between the lines” were to bring long lasting comfort and happiness to thousands of fans while also proving how the band were becoming masters at writing hugely affecting songs about human relationships. In subsequent years you’d occasionally hear jokes about how going to a Teenage Fanclub gig would be a chance to spend time with middle-aged men crying into their beards. Songs like this are largely responsible.

Their ability to document relationships in song is also shown on Mellow Doubt, Blake’s first contribution to the album. Lyrically it’s one of their most open, delicate and bittersweet moments. Somewhat contrastingly, Blake’s whistling in the later stages of the song still prompts much rejoicing on the rare occasions they still play it live. At this stage the band were on Creation Records but the sensitivity shown here was at direct odds to much of the male bravado and hedonistic behaviour found elsewhere on the label at the time.

Musically, Neil Jung is the direct opposite to Mellow Doubt, heavier with a windingly ecstatic outro, with Blake recounting a story of a relationship in decline, his voice straining under emotional weight (the main protagonist of the song is BMX Bandits frontman Duglas Stewart – “you were changing, didn’t want to stay the same, re-arranging, dropped a letter from your name”). It remains a supremely cathartic five minutes that somehow manages to appropriately represent the two individuals that help form the title – Canadian rocker Neil Young and Swiss philosopher/psychiatrist Carl Jung.

Don’t Look Back is the other Gerry Love-authored song on the first half and it’s very much the engine room of the album. If it was a footballer it would be the unseen, unsung hero – not as high profile or highly paid as some of its teammates but still utterly indispensable – a view attested by its ever-present appearance in setlists over the subsequent twenty plus years.

The second half opens with Tears, a beautiful anomaly in many ways – piano led and slower paced, with strings and brass appearing as it progresses. That it’s followed by the chiming Discolite, one of their most overtly power-pop moments, is testament to the subtle variety found on the album. Say No meanwhile is the most spacious track on the album, benefitting from some pleasingly structured musical punctuation and McGinley’s other song on this side, I Gotta Know, further confirms the view that he’s “very much the George Harrison of the band” (copyright fellow musicOMH writer, Dan Paton).

If McGinley is the Harrison of the band, then it only feels right to consider who takes the roles of Paul McCartney and John Lennon. Both Love and Blake feel musically closer to the warmth and consonance of McCartney but let’s give fellow bassist Gerry Love the McCartney role and hand unofficial band leader/fellow spectacle-wearer/all round man of the people Norman Blake the Lennon position. What’s for certain is that few long-running bands can boast three songwriters of such distinction as the names mentioned here (and yes, Teenage Fanclub and The Beatles do deserve to be spoken of in the same breath, thank you).

The final stages of the album still contain much to please. Going Places is another example of how their songs were being further refined and finessed. Gerry Love’s endearing awe of the natural world once again gently enters his lyrics (not for the last time) as he poetically sings “bound in motion, found my headwind was blowing fine, I’ve requested the stars to shine, for words that no longer rhyme”. Mandolins enter late on and suddenly we’re transported to A Better Place. The sense of sweetness is palpable and it’s a trait that would remain in his songs on future albums. Sometimes I think I’m still recovering from their surprise decision to include it in the encore of their Electric Ballroom show in November 2016.

Earlier years saw the band heavily likened to Big Star but on this outing they largely moved beyond such comparisons. I’ll Make It Clear is one song that does bring Alex Chilton and co to mind however, Blake excelling once again at expressing his feelings in candid style while guitars abound enthusiastically. Final track Hardcore / Ballad is arguably the only moment on the album that feels a little subdued, the opening section a reminder of the rougher, gnarlier sound of earlier albums. It might not quite compare to the iconic closing tracks on some of their other albums (Is This Music? on Bandwagonesque, Gene Clark on Thirteen, Speed Of Light on Songs From Northern Britain) but by this stage we’re feeling so giddy it doesn’t really matter.

The trio of emotional full album shows at the Electric Ballroom in November 2018 (and in other cities around the UK) gave fans one last chance to hear it in full before Gerry Love departed the band (the physical pressures of travelling around the world with the band didn’t appeal and a series of shows in Asia proved the catalyst for him to leave – Blake and McGinley still head up the band but they no longer play Love’s songs live).

Their 1997 album Songs From Northern Britain might fractionally edge it as their best album (if I had to choose a personal favourite that would be it) but Grand Prix still represented a glorious fork in the road. As it reaches its 25th anniversary it continues to be an unfailingly dependable album, one to soundtrack life’s ups and downs, and still one worthy of considerable celebration.