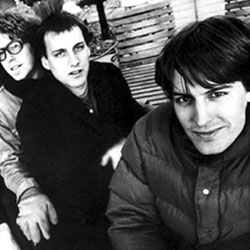 You may have heard the name once or twice, perhaps mentioned briefly in glossy music magazine, but the legacy began by 1980’s lo-fi recordings by S.M. and Spiral Stairs (better known as Stephen Malkmus and Scott Kannberg respectively) stretches further than you’d imagine.

Pavement may have been too clever for their own good at times, but were always endearing. Led by self-confessed Anglophile Malkmus, they patched together sheets of rough music and tied it all together with ropes of obtuse lyrical reference and the odd knot of white noise. Plaid shirt sarcasm began here, although nobody pulled it off with the charm of Pavement’s five sordid sentinels.

Slanted And Enchanted (1992), the first album proper, was quickly picked up by the slacker scene and heralded as the champion of laissez faire music. The songs were fractured and unpolished, and it was hard to tell if Malkmus even cared enough to sing properly at times. Nevertheless, it was also home to indie classics like Here and Summer Babe (Winter Version), and, as a whole, worked unbelievably well.

Demand for Pavement went through the roof, and they haphazardly put together a collection of old cuts in a 20+ track album. Just to top it off, they gave it an unabashedly horrendous name in the form of Westing: By Musket And Sextant (1993). The early recordings on offer in Westing are musically indebted to the likes of the Pixies and Sonic Youth, but are hit and miss to the extent that you are left in no doubt that Westing is a compilation of questionable quality and little more.

Moping teens and thristy critics were never going to be satisfied with Westing, and, to Pavement’s credit, they followed it up with an absolute blinder. Crooked Rain, Crooked Rain (1994) is as much a commentary as it is an album, name-checking peers such as Smashing Pumpkins and Stone Temple Pilots in various tracks. Hippie drummer Gary Young had been replaced in favour of the comparitively grounded Steve West, and the new Pavement songs bobbed along a steadier, more metronomic beat. Cut Your Hair became an indie anthem, and even scored some mainstream success. It was becoming increasingly apparent by this point that Malkmus’ songwriting was striking a chord with Generation X (particularly the excellent Gold Soundz).

Crooked Rain was moody as it was eccentric, and the widespread acclaim for Cut Your Hair apparently worried Pavement. There was, however, no question about them “selling out” or sugar-coating their music, and they smartly cost themselves MTV status with the eclectic and leftfield Wowee Zowee (1995). Malkmus chose Father To A Sister Of Thought as a single release, and the lo-fi country ballad was met with a whimper. Indeed, whilst Pavement fans embraced the genre-hopping Wowee Zowee, its arrival sparked a media backlash, and as the likes of Beck took the slacker limelight, Pavement retained their crowns as kings of the underground.

We arrive now at Brighten The Corners (1997), my personal favourite album. It is, without doubt, the most accessible Pavement album, rocking gently between quirky love songs (the eternally gorgeous Shady Lane) and political critiques (Embassy Row). Album opener Stereo is an engagingly sarcastic dig at the music media, and remains a provoking yet enjoyable song to this day (unlike, say, Stereophonics’ Mr. Writer). With Brighten The Corners the boys threw out white noise in favour of harmonies and more varied instrumentation, whilst never losing an ounce of credibility (Hawaiian Blue being the perfect example).

With the end of the road now in sight (fuelled by persistent solo outings by both Malkmus and Kannberg), Pavement teamed up with Nigel Godrich to bring us Terror Twilight (1999). To Pavement fans, it is an immensely sad album, crammed full of mournful lyrics and extended minor chord riffs. Songs like Major Leagues and The Hexx tug at the heartstrings of lovers and sceptics alike and sit comfortably in the most consistently polished Pavement tracklisting there ever was. Carrot Rope, however, stood out for its unashamed excitement about the future, and is the perfect album closer. After all Terror Twilight couldn’t have ended on a sour note, it wouldn’t have been right.

Pavement branded 1990s indie with intelligence and unpredictability, deliberately spurning mainstream success and never forgetting their musical roots. Malkmus, Kannberg, West, Ibold and Nastanovic were a beacon in the bleak, constantly toying with cynicism but never allowing it to taint their small town optimism. Their influence was overwhelming in a subtle sort of way, and you’ll find Pavement-isms in more bands than you’d imagine (a prime example being Parklife-era Blur.

Posthomous releases are available, if that kind of thing floats your boat, in the form of the exhaustive Slow Century DVD and a massively reworked and expanded version of Slanted And Enchanted (cunningly entitled Slanted And Enchanted: Luxe And Redux) featuring Peel Sessions among other rarities. Cryptic yet mercurial. Long live the underground.

More on Pavement
Pavement – Quarantine The Past: The Best Of Pavement
Spotlight: Pavement – long live the underground