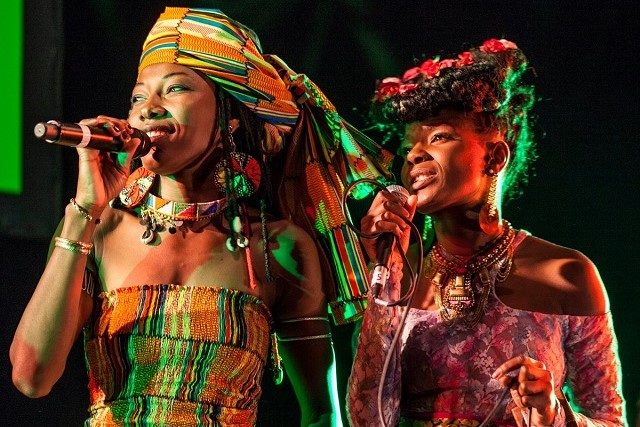 This week sees Damon Albarn’s Africa Express project reach London with a show on Friday at Wanstead Flats. The show is part of Waltham Forest’s London Borough Of Culture programme and will take place inside a large tent featuring the likes of Django Django, Gruff Rhys, Imarhan, Joan As Police Woman, Rokia Traoré, The Good, The Bad & The Queen and a suite of lesser known artists. It promises to provide be a welcome injection of positivity and cross-cultural celebration just a short distance from where Albarn grew up.

The same night sees Manchester trio Doves return to the live stage after an extended hiatus. They play the Royal Albert Hall as part of the Teenage Cancer Trust shows. They may not be releasing new music until next year but this will be a long-overdue opportunity for fans to hear songs from across their four albums to date.

We’ve attended many Upset The Rhythm shows in London over the years and they celebrate their 15th anniversary on Wednesday with a packed show at the Tufnell Park Dome. The bill includes Sauna Youth, Trash Kit, Guttersnipe, Vital Idles, Rattle and Dog Chocolate. You can watch all of these bands for the sum of £10 which seems like ridiculously good value. More information here.

Tuesday sees two artists in the prime of their career hit London. Sharon Van Etten released fifth album Remind Me Tomorrow earlier this year and she’ll be performing at the Roundhouse while over at EartH in Dalston Jessica Pratt will play songs from acclaimed new album Quiet Signs.

Piano Day is an annual event celebrating, as you might imagine from the name, all things piano. It falls on 29th March each year and there are a few events taking place in London. EartH will host a show curated by FLOAT Records featuring sets by Luke Abbott, Jack Wyllie, Reeps One and Andrea Belfi. The Erased Tapes Sound Gallery will also be hosting a special piano show by Rival Consoles and Midori Hirano. Daylight Music meanwhile will see Késia Decoté, Gabriel Olafs and Angus Bayley all play at Union Chapel a day later on Saturday between 12:00-14:00. More information here.

Finally, Café Oto has hosted a few excellent residencies recently and they have another one this week from South Korean cellist Okkyung Lee. She’ll be at the Dalston venue from Thursday to Saturday playing various solo sets and collaborating with other artists from the world of experimental/improvised music. More information here.

Somerset House announced the line up for their Summer Series this week and it’s a strong one.

It takes place across eleven nights in July in the open-air courtyard just by the Thames and opens with a show by LA collective The Internet on 11th July. It also sees performances by Sons Of Kemet, Doves, Nao, The Good, The Bad, The Queen, Cut Copy, Gossip and more across the following ten days.

Read about the full line up here.