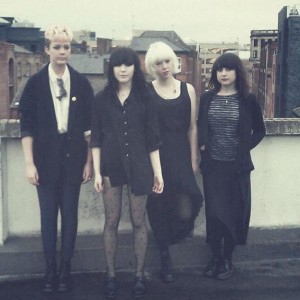 Dot-to-Dot celebrates its 10th birthday this year, with a packed line-up taking over venues in three cities across the country. Originally based in Nottingham, it crept into Bristol in 2007 and added Manchester to its empire in 2010.

Our five of the best at Dot-to-Dot…

PINS won over a whole new raft of fans when they supported Sleater Kinney on their recent tour. While influenced by riot grrrl, the four-piece look more to My Bloody Valentine and The Jesus And Mary Chain for their sound, and they already have some anthemic songs in the setlist – listen out for Girls Like Us.

Laura Doggett looks set to be one of 2015’s big success stories; a bassy voice to rival Florence Welch combined with elaborate arrangements, she pulls at your heart strings while urging you to dance.

(David) Rhodes has toured with the likes of Rufus Wainwright, Nick Mulvey, Sam Smith and Laura Marling… which gives you an idea of the sort of music he specialises in. A self-taught guitarist, he’s not a light hearted soul, and his moody pop is absorbing.

Dot-to-Dot 2015 takes place in Manchester, Bristol and Nottingham on 22-24 May 2015. For ticket sales and further information check dottodotfestival.co.uk