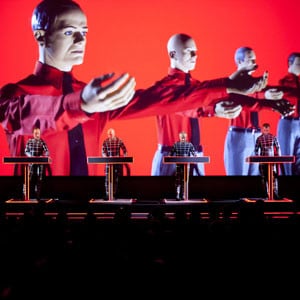 In less than a week we (those of us not going to Lovebox or Tramlines) shall decamp to Henham Park for Latitude. We’re excited. And with good reason. Now firmly established, the all singing, all dancing, all literary and all laughs blend of bands, theatre and comedy still manages to set it apart from the crowd.

Below are just a few of the things happening at Latitude that will make it so.

1. Yeah Yeah Yeahs
Where? Obelisk Arena
Why? Because Karen O will smile before playing Maps, and the world will simultaneously seem like a much happier and much sadder place. And then she’ll fellate a microphone.

2. Bo Ningen
Where? The Lake Stage
Why? Because listening to them is the most fun you can have with four Japanese fellas whose hair makes Rapunzel look like some kind of rank amateur. Oh, and drummer Akihide “Mon-chan” Monna is frankly amazing.

3. DIIV
Where? i Arena
Why? Because Doused, from their underrated album Oshin, is a song that deserves a massive audience. There’s also the possibility we might get a repeat of front man Zachery Smith’s SXSW rant, skewed for the occasion: “Drunk Radio 3 presenters and quinoa. Everyone is reading liberal leaning newspapers and drinking Pimms… Ballet, ballet, ballet. It’s bullshit… sorry”. Or something.

4. Kraftwerk
Where? Obelisk Arena
Why? Because they’re the German Rolling Stones. If Keith had fallen out of that coconut tree 45 years ago. In Bremen. Plus, they’re in 3D! Which will potentially mean you have to pay £1 to wear stupid glasses and they’ll look much the same, only slightly darker.

5. John Grant
Where? BBC Radio 6 Music Stage
Why? Because he’s the Greatest Mother Fucker you’re ever going to meet. And his last two records have been pretty damn handy.

6. Chlöe Howl
Where? The Alcove (New stage for 2013)
Why? It’s the two dots above the o which do it. That, and to see if Howl is going to make good on the promise that’s been displayed across the two (ace) singles she’s released so far. It’ll be one of those “I was there in 2013…” moments if she does.

7. Rachel Zeffira
Where? i Arena
Why? Because we’ve only ever seen her play in an environment with religious connotations. So it will be interesting to see how the lovely, gossamer spun tunes from her debut sound when God is not in the house.

8. Bobby Womack
Where? Obelisk Arena
Why? In the Sunday morning slot previously occupied by Joanna Newsome and Thom Yorke, you can be assured that no one, absolutely no one, will rock a red leather outfit like Bobby. That and the fact there will also be few better songs you’ll hear all weekend than Across 110th Street.

9. Fimber Bravo
Where? i Arena
Why? Because, if the sun is shining, if the mood is right, Fimber Bravo and his steel drum will be both timely and fitting. Like some pants. Made of clocks.

10. Bassekou Kouyate & Ngoni ba
Where? Obelisk Arena
Why? Because Kouyate is a genuine, bona-fide legend. And at Field Day last year, as part of Afrocubism he was responsible for the single most joyous performance of the whole day.

Latitude takes place from Thursday 18 July to Sunday 21 July 2013 at Henham Park, Southwold, Suffolk. Tickets can be purchased from latitudefestival.com/tickets and cost £190.50 for the full weekend.