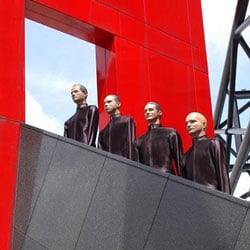 Ask any clinical psychologist and they’ll tell you that primacy and recency are vitally important. While you’re there, they’ll also probably tell you that you want to sleep with your mother, but that’s beside the point.

Anyway, perhaps you do. Based on the vital importance of primacy and recency it’s fair to assume that this summer of music, in retrospect, is going to be dominated by the Isle Of Wight, whose primacy will have been achieved thanks to the rather wittily titled Isle Of Wight Festival, while recency will be achieved by September’s Bestival. But what else would you expect of a location which officially* has more festivals per capita than any other location in the galaxy?

As for Bestival, well, it’s so good they named it Bestival. Now in its sixth year, Rob Da Bank’s brainchild has won the title of ‘best medium-sized festival’ more times than not since its inception. It’s pretty much the only festival which a) has a dedicated area for children called Breastival and b) encourages you to dress up as a Star Trek crew member on the Sunday and not feel like a social leper for so doing – but only because this year’s traditional final day fancy dress theme is ‘A Space Oddity’.

But as with any festival worth crowing about, there’s a hell of a lot more to the sound of Bestival then those three acts with the biggest font size on the posters.

Klaxons, apparently still not ready to release the follow-up to their Mercury winning debut, will be hoping the crowd response to their new material doesn’t necessitate another 16 months in the studio. Seasick Steve will no doubt be dressed in dungarees, playing things which are only instruments in the broadest sense of the word, and be hugely endearing. And Friendly Fires will be looking to solidify their position as the most fun you can have in a field without resorting to cow tipping.

And there’s so much else. So here are 10 things we’re looking forward to remembering we want to see most (that we haven’t yet mentioned):

– The Big Pink
Loud, apocalyptic and generally ace, and that’s just their debut album
– Music From The Penguin Cafe
The late Penguin Cafe Orchestra founder Simon Jeffes’ son Arthur has regrouped the original band. Expect a harmonium
– The Horrors
Reborn thanks to Geoff Barrow; Sea Within A Sea has the potential to be the best thing you see all weekend. Or to get lost in the scenery
– The other 2009 Mercury nominees hereabouts: Speech Debelle, La Roux, Bat For Lashes and Florence And The Machine are all here too
– Major Lazer
Diplo and Switch have extra-curricular fun with a galaxy of guest stars and a cartoon soldier
– Buraka Som Sistema
That ubiquitous Diplo chap was at the production controls of their debut album, which is all kinds of party-starting
– Diplo Presents The Mad Decent Soundsystem
Do you reckon Rob Da Bank likes Diplo as much as we do? This’ll be his label showcase, then
– Dirty Projectors
Fresh from their car crash, for a spot of experimentalism
– Eat Static
The psyche-trance purveyors and Ozric Tentacles scions are as festival as festivals get- George Pringle
She’s great. You just haven’t realised it yet

But let’s not stop there. Bestival is another festival which has taken the Glasto-theory, that the music isn’t enough, and ran with it. So you’ve got an inflatable church (get married!), an entire area devoted devoted to a series of healing techniques (get healthy!) AND bespoke cup-cake manufacturers (get full of buttercream!) to keep you busy.

And we haven’t even mentioned the insect circus. The Come Dancing Tent. The cabaret. Or the fact you can swim there. Say goodbye to crappy festival buses, overcrowded trains and getting stuck in boggy car parks for days on end. Say hello to the Solent and, uh, sharks.

Pass me my Speedos and grease me up with duck fat. We’ll see you there.

* = “Officially” translation: looked up on Wikipedia