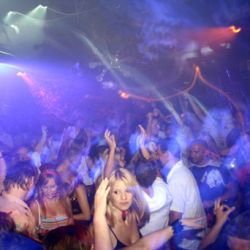 When it comes to dance music the party gets well and truly underway this weekend with Gatecrashers Summer Soundsystem.

After a four year absence, Gatecrasher returns to the leafy grounds of Lotherton Hall near Leeds to dance the socks off anyone who can go for 13 hours.

It has all the makings of the kind of event that becomes festival folklore, with 15,000 punters knocking out some shapes to the likes of Judge
Jules, Mr Scruff, Fabio & Grooverider, Timo Maas, Dave Pearce and Lisa Pin-Up.

This year the organisers are crashing indie discos too. Pete Doherty had been billed to appear for a DJ set but it now appears drummer Adam Ficek will be the Babyshambler joined by members of Franz Ferdinand, The Futureheads, The Ordinary Boys and Belle and Sebastian in the Teenage Kicks arena.

As far as this event is concerned, thats just a token nod to the indie scene. What Gatecrasher does best is clubbing, and with the best will in the world none of our traditional guitar wielding disc jockeys are going to make any waves in that area.

And thats where the other six arenas come in. With almost 100 DJs and performers on hand to blow away the cobwebs and mark the arrival of festival season in clubland, youll be able to witness some of the best names from across the globe, all within walking distance of each other and without pesky bouncers asking you to queue.

The Dirty Disco Arena is one to check in and out of, where Mr Scruff and Timo Maas will be mixing it up with the new prince of house, Martin Buttrich. Drum ‘n’ bass and breaks fans have the Metropolis and AWOL arena to themselves, with the almighty prospect of Aphrodite and Andy C lying in wait.

Hed Kandi top it off with sun-drenched glitz and glamour as only they know how, transforming their arena with bespoke, stylish dcor, beautiful entertainers, and top DJs. Steve Edwards who will perform live, while main players John Jones, Andy Norman, Charlie Edwards, Paul Hill, Chris Bailey and Corey are all heading to Leeds.

Its all set to be an absolute monster kicking off at 5pm and running through till 6am.