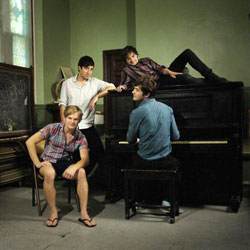 The seventh Green Man festival sees the gathering continue on its trajectory from a tiny folky one-dayer in 2003 to one of the established highlights of the festival season.

The gathering of beard-twiddling, cider-drinking folkies in the lee of Sugar Loaf mountain in the Brecon Beacons will likely see a slight shift in the clientele this year, as acts such as Jarvis Cocker, Gang Gang Dance, Grizzly Bear and Hawkwind – yes, Hawkwind – add broader appeal.

But there’s still plenty on the bill for traditional attendees of psychedelic folk festivals too.
On the safer side of the line-up are Radio 2 friendly (these days not a backhanded compliment) British Sea Power, Noah And The Whale and Scott Matthews with early evening main stage slots on Friday, Saturday and Sunday, respectively. Emmy The Great makes an early appearance on the main stage on Saturday too, which is a step up for her and one of the likely acoustic highlights; whether the sun holds, the drizzle drips, or the heavens open her music is at once breezy and gloomy and she will shine tweely whatever.

Camera Obscura, Grizzly Bear, Four Tet and Gang Gang Dance add some hipness to the bill and will be drawing crowds of Dalstonites and their kin. And in the same vein Animal Collective, who headline the Friday night, are sure to pull a huge crowd which, against the gloomy night-time shadows of the rain-soaked Brecon Beacons, could be absolutely amazing.

Jarvis Cocker is a pretty sure bet for Saturday’s headliner, although reports of his live shows have not been particularly inspiring. The Green Man crowd is typically a well-intentioned mass who will look for the good. With Andrew Bird on at a similar time, Cocker faces surprisingly stiff competition. Perhaps people blissed out after the delicate cabin folk of Bon Iver will naturally drift to Bird’s violin led loveliness to hear one of this year’s stand out albums – Noble Beast – live.

On the little Green Man pub, incredibly talented folk darling Mary Hampton and similarly prodigious James Yuill reflect the full range of this year’s line-up, and the intriguingly named She Keeps Bees will no doubt draw the apiarist contingent, always a sizeable faction at this festival.

For those sick of music, Keith Allen, Howard Marks, Will Hodgkinson and Jeremy Dyson will be in the literature tent and Josie Long heads up an impressive comedy line-up.

The three days of The Green Man are packed with interest and, with a more varied line-up than ever before, there is something almost everyone. Add to all these offerings the atmosphere of the festival, which welcomes everyone with open arms, and the weekend is set to be great. Even the inevitable rain shouldn’t dampen the spirits, as it looks like – and whisper this while touching wood – it looks like there won’t be too much of it.