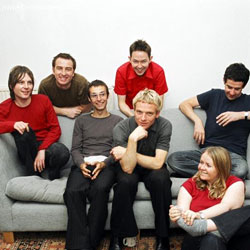 Set in a gargantuan park in the rolling hills of Suffolk, Latitude quite rightfully has a reputation for being, you know, just a bit, well, middle-class. You’re more likely to get run over by a marauding mother and her 4×4 buggy than you are hit by a bottle of urine or forced into a group hug whilst singing Wonderwall. But what the festival may lack in obvious risk, it more than makes up for with another stellar line-up of music, comedy, literature, poetry, film and theatre. If you wander around the woods long enough at night, you may also see some poi, but don’t let that put you off.

After focusing on the established headliners last year, 2010 sees Brit-award winning Florence & The Machine bring her well-oiled stage show to the site on Friday, whilst Vampire Weekend close the show on the Sunday. Squashed in between those two relatively new acts are a returning one; indie-darlings Belle & Sebastian. It’s a massive coup for Latitude and one that fits in perfectly with the ethos of a festival that genuinely tries to appeal to as large a demographic as possible.

So, for all the folk loveliness of acts like Laura Marling or The Unthanks, you also get the abrasive Crystal Castles or the doom-laden rock of The Horrors. Elsewhere, the artful cacophony of Dirty Projectors rubs alongside the soft hush of Midlake, whilst The xx, Yeasayer and Wild Beats all battle it out for the title of bloggers’ favourite.

Perhaps the most interesting stage is tucked away in the woods and it’s here that you tend to find the yoof, usually flinging themselves about like crazy people. Highlights on this stage include Sting’s offspring I Blame Coco (better than that sounds), San Francisco drug hoovers Girls, Swedish teens First Aid Kit and the wonderfully moody LoneLady. Oh, and did we mention that the whole thing is kicked off by a midnight performance by the actual Sir Tom Jones on the Thursday night?

It would be easy to go to Latitude and not see a single band. It would be a real shame, but it’s a possibility. For those not interested in any of the above or the myriad other bands (The Maccabees! Grizzly Bear! Jamie Lidell!), you could take yourself off to the comedy tent and share some laughs with Richard Herring, Ardal O’Hanlon, Rich Hall, Shooting Stars’ Angelos Epithemou and Josie Long, amongst others. Or, if you want to be a bit more cerebral, you can take in some poetry (the excellent John Cooper Clarke will be there, as well as Art Brut‘s Eddie Argos), or go and watch some Shakespeare in the Theatre Arena. If you’re a bookworm you may enjoy readings from the likes of Sebastian Faulks, Hanif Kureishi and, wait for it, Bret Easton Ellis.

Perhaps the best thing about Latitude is that you can do as little or as much as you like. It’s easy to have a wander round and stumble upon something unexpected; finding Jarvis Cocker doing a couple of songs during a Q&A about climate change, for example; or sheltering from the rain and stumbling into Miranda Sawyer chatting with Jake Chapman; or walking across the bridge and finding a symphony orchestra on a small stage on the lake. All these things happened last year, and it’s certain to throw up similarly memorable accidental discoveries again this time round.

In short, Latitude feels like the best bits of Glastonbury and the Edinburgh Fringe Festival welded together. For three days, Suffolk houses some of the best cultural talent the world has to offer and the only downside is that it doesn’t last longer.

Latitude takes place from 15th to 18th July 2010 in Southwold, Suffolk. Tickets and further information are available from latitudefestival.com.