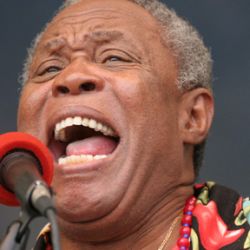 Aside from the burnt turkey, this year’s Christmas began on a downer with the death of James Brown. Whilst his loyal core of fans mourned instantly, it took a while for others to realise how massive his contribution to music had been.

There’s never been a more timely moment to reassess the soul genre as a whole and rediscover its timeless appeal.

In an age of mediocre manufactured pop it’s encouraging that the likes of Amy Winehouse are determined to keep the spirit alive by kicking our moribund charts in the goolies with raw emotion – there’s a reason why it’s called Soul.

This February gives us another joyous reason to explore the labyrinth corridors of the Barbican. Following on from the massively successful Jazz Britannia and Folk Britannia series of concerts, Soul Britannia explores the UK’s love affair with black music over the past 50 years.

As with previous collaborations, the Barbican have lined up a series of mouth-watering concerts in tandem with the BBC to tell the story of Britain’s soul side. Because of the Barbican’s uniqueness as an arts venue, there are also music and film events in its various spaces for those seeking refuge from the seriously unfunky world outside.

The Barbican is 25-years-old this year, and all the stops have been pulled out. The festival opens with a tantalising all-star set from Brand New Heavies. N’Dea Davenport and co will be joined on stage by such luminaries as Omar, Mica Paris and Soul II Soul supremo Jazzie B.

The night sets out to illustrate the contemporary soul scene in the UK from the early ’90s to the noughties. Tickets are likely to sell like hot cakes. If you can get your hands on a seat then you should be in for a real treat of a night to kick off the weekend.

The second night of the festival brings you the Soul Britannia All-Stars, a unique line up featuring the cream of this fair isle’s funk and soul vocalists. The too-numerous-to-mention line up includes Madeline Bell, Linda Lewis, Hamish Stuart of Average White Band and members of Cymande.

This is sure to be one of those gigs that will have you crate-digging in Berwick Street’s vinyl shops the next morning. If you can’t buy one of the ludicrously good value for money tickets then you can watch coverage of this night on BBC4, just be sure to invite some people around if you don’t want to be dancing on your own.

Sunday’s performance looks at the transatlantic connection that flowered in the 50s and 60s: a time when post-war Britain looked across the pond to escape itself with the new sound and style of R&B (back when it meant something other than tiresome boy bands crooning robotically).

There had better be plenty of parking spaces for scooters in the area as the line up is a mod’s dream ticket with Geno Washington, Jimmy Jones, Eric Burdon and Sam Moore of Sam and Dave fame.

The accompanying Beeb series looks just as fascinating, with three episodes charting the history of British soul. From mods and rockers battling it out on Brighton beach to Jamaicas influence on today’s UK hip-hop sound.

The Soul Britannia festival of events looks sure to be something really special so get in touch with your inner soul and get stuck in. This is a great reason to go out and cast off those winter blues.