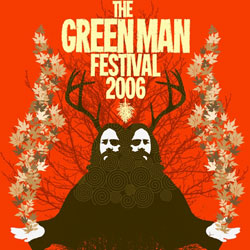 The Green Man Festival began life in 2003 as the baby of folky duo Jo and Danny.

Indeed, I once emailed the pair about covering the event that year when it was a fairly ramshackle operation and received a personal response. There were no PR companies employed back then.
Since then it has shifted from its tiny original site and this year sees the most blinding line-up ever. Veritably, hour after hour at this year’s festival will have something demanding attention. Now, I hear all of you who say that surely as the festival has grown it’s lost its rustic charm. Doesn’t more people lead to more problems, and horrid horrid corporations getting involved?

In a word, no. The Green Man, despite its growth, has retained a homely sense of community, good will and independence. Sure, its bigger capacity has meant more organisation is required and thus higher ticket prices, but one of Jo and Danny’s greatest achievements is to nurture the festival to the stature it has now, without losing that sunny charm that defined its early days.

Last year’s event saw the emergence of The Aliens, a rare outing for the Silver Jews, the venerable Bert Jansch and John Renbourn, the underrated Teddy Thompson and the peerless Calexico. But this year is even better.

Anyone who has been prominent in the alt-folk and country world in the last twelve months is here. Joanna Newsom headlines on Friday, after a set from her beau Bill Callahan, performing under his real name rather than the usual Smog. Further down the bill that day are the exquisite Rachel Unthank and the Winterset, and promising singer-songwriter Findlay Brown.

Saturday is all about the old-timers, with Robert Plant‘s presence perhaps attracting a different sort of fan to this festival. Contrast him with Vashti Bunyan, who he follows that evening. Highlight of Saturday, however, will surely be Vetiver, whose moody, mysterious tunes will sit perfectly amid the rolling hills and mist.

Sometime Vetiver member and now crown prince of nu-weird, Devendra Banhart, plays on Sunday afternoon, along with Scotland’s finest folk singer Alasdair Roberts, with Stephen Malkmus headlining the main stage. Curse him for this, as the ex-Pavement man is up against The Aliens in the Fokey Dokey Tent: an agonising conundrum for all. Also in the tent over the weekend are Renbourn, Seasick Steve and King Creosote.

Like all ’boutique’ festivals there is a literature tent. The biggest draw must be Vashti Bunyan, who will tell us all of her fascinating departure and triumphant return to music. A cinema tent will provide rockumentaries on Love and Joe Strummer.

Green Man takes its environmental credentials seriously. It’s the kind of place where you can buy a pork pie, but you’d better eat it in your tent unless you enjoy the beady eyes of vegans judging you. There’s even a new ‘Green Field’ at this year’s event, with talks on how to live a greener lifestyle. Politics never could be separated from folk music, but when the music is this good, bring it on. The Green Man, once more, looks like being the complete package.