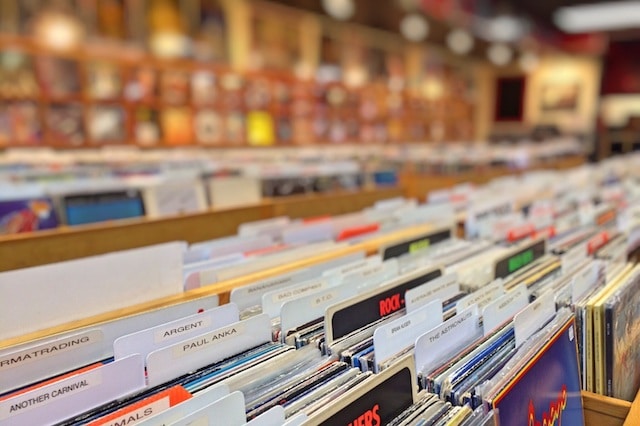 Start unfurling tote bags, ticking off lists and layering yourself up: Record Store Day, this year taking place on 21 April, is nearly upon us again. More than 200 independent record shops throughout the UK will be preparing for early morning queues – a few hardy types pitch up the night before – and stocking up on as many of this year’s 500-ish limited-edition releases as they can possibly carry.

Although there’s a sense that we might be getting somewhere near scraping the polish from the bottom of the re-release barrel (a green vinyl 7″ of Shaggy’s Oh Carolina, anyone?), there are still a few gems to be found, so we’ve asked some of musicOMH’s staff to sift through the list of releases and pick the few they’d be most likely to leave the house for, early on an April morning. Hopefully it won’t be too cold.

Only kidding. Of course it’s going to be cold. It’s always cold now.

Since first mooring its luxury yacht in 2014, the Too Slow to Disco series, the work of Berlin-based DJ Supermarkt (aka Marcus Liesenfeld), has already given us three numbered assortments of pristine, uber-smooth AOR pop obscurities, along with 2016’s excellent The Ladies Of Too Slow To Disco.

For the fifth outing, he’s asked Brazilian singer, composer and multi-instrumentalist Ed Motta to dive into his own 30,000-odd strong record collection. Ranging from the lushly squelchy disco of Sandra Sá to Lucinha Turnbull’s tropicalia-inflected soul or Carlinhos & Soninha Queiroz’ hyperactive soft-pop, it’s a sweet, zingy caipirinha of a compilation. If this doesn’t bring the sun out, nothing will.

Given a DVD release by the BFI in 2014, The Changes was a chilling children’s sci-fi serial, based on a trilogy of books by Peter Dickinson, first shown by the BBC in 1975. Like Terry Nation’s Survivors, from the same year, it presented a dystopian, but recognisable Britain, with the population here compelled to destroy all machines and technology and return to an agrarian way of living. It’s a move which quickly exposes racist, fascist undercurrents to British society. Imagine that.

The score, composed by Kingsland while working with the pioneering and currently resurgent BBC Radiophonic Workshop, was a large part of the series’ haunting power, with an appropriate smattering of wood and string accompanying their primal electronics. Fans of Broadcast, Ghost Box Records or Boards Of Canada will be at home here.

Produced, engineered and recorded by a cast including John McEntire, along with Shellac’s Bob Weston and Steve Albini, Chicagoan Liam Hayes’ second album as Plush was originally released in 2002. Hayes built on the simple piano and vocal arrangements of his debut with lashings of rich, cripplingly expensive orchestration, but the album didn’t find distribution anywhere but Japan until 2008.

A limited release via Record Store Day mightn’t be the wide release Fed has so long deserved, but it’s a start. Just don’t get to it before I do. Please.

The inclusion of three new Sufjan Stevens’ achingly beautiful songs to Luca Guadagnino’s cinematic masterpiece Call Me By Your Name left many a broken husk on the cinema floor. Both Guadagnino and Stevens were rightly nominated for Oscars for their work, and every Stevens fan will be desperate to get their hands on one of these individually numbered 10”s. This is the one making me eat my 2016 promise of ‘never again’. See you in the queue.

The National – Boxer Live in Brussels

The National’s breakout album, Boxer, turned 10 on 9 November 2017. To celebrate, the band performed the album in full in Brussels that evening. Those of us not lucky enough to have been there will have to be content with fighting for a copy of this clear LP.

Joshua Hedley, a prodigiously talented fiddle player & country singer is finally releasing his debut album, Mr Jukebox, after years of honing his craft in Nashville and playing with artists including Jonny Fritz, Justin Townes Earle, Dad Country and more. His solo album promises to be a classic country album reminiscent of the ’60s heyday, and this 7” is the perfect taster. Hedley is one to watch.

Laura Veirs’ 10th Album, The Lookout is released this month through Bella Union. Expect a concept album about the fragility of precious things. The aforementioned Sufjan Stevens pops up as a guest vocalist. But for RSD 2018 she’s treating us to a 7″ of unreleased track Fading Of Stars and a cover of Daniel Johnston’s classic True Love Will Find You In The End. A precious thing indeed.

As the last final reunion show really does seem to have been the final one, I’ll need to get my Carter USM kicks from this re-issue of their 1990 debut, this time it’s all fancy with black splatters on the white vinyl, so that’s fun.

Fingers crossed it doesn’t turn to fisticuffs with one of my best friends to get hold of this previously unreleased practice session from the year Jason Lytle & the band released the instant classic Under The Western Freeway. This release is bittersweet after the tragic loss of bassist Kevin Garcia last year.

The debut album by Suede was a formative, life-altering album for many and it is being re-released on silver vinyl for its 25th anniversary (with the iconic cover art given a new, silver-tinted look). Including nine B-sides and coming soon after the publication of Brett Anderson’s autobiography Coal Black Mornings, it’s sure to be a popular purchase on 21st April.

Mogwai are consistent high-performers these days; last year’s Every Country’s Sun was their 9th studio album but back at the start of their career they released Ten Rapid, a raw and powerful collection of early singles, B-sides and rarities. They still play the likes of Ithica 27 ϕ 9 and Helicon 1 & 2 in live shows and the album is being re-released on coloured vinyl.

‘Neo-classical’ composer Max Richter has recently worked on big projects that scored ballets (Woolf Works), reimagined the work of heavyweight composers (Vivaldi Reimagined) or were intended to be listened to while sleeping (Sleep) but it was The Blue Notebooks, released back in 2004 that was instrumental in launching his career. It is now being re-released on, appropriately, blue double vinyl.

Dirty Three: Whatever You Love You Are (2 x LP)

They may have been quiet of late due to Warren Ellis’ continuing work with Nick Cave &The Bad Seeds but when they do play Dirty Three are one of the best live bands on the planet. They’ve also got a much-loved discography and one of the highlights, Whatever You Love You Are, is the latest to be re-released by Bella Union for Record Store Day.

You can find a downloadable PDF type thing of the entire Record Store Day 2018 list here.