The Residents, Beak>, Anna Calvi… This Week In Gigs 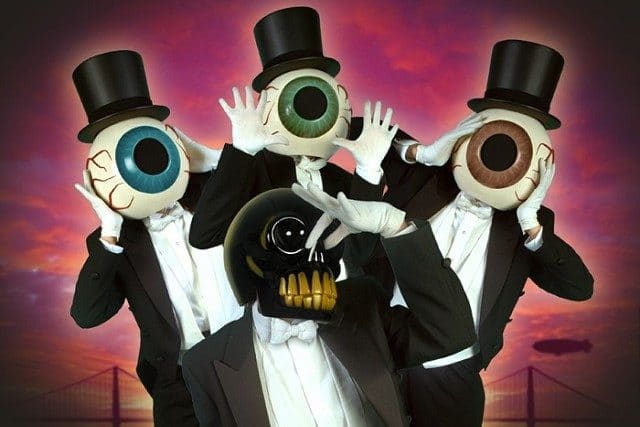 This week sees a rare appearance in London by seminal American avant-gardists The Residents. Now into their 45th year the mysterious quartet will be performing a new show entitled In Between Dreams. Last year’s Intruders album further extended their off-kilter, under-the-radar legacy and they’ll be at Union Chapel on Monday. Check back here for a review later in the week.

Daylight Music returns on Saturday at Union Chapel (the 299th edition no less!) with DM founder/organiser Ben Eshmade’s The Age Of Not Believing musical project taking centre stage. The cast includes Emily Barker, Ted Barnes, Adrian Crowley, Piney Gir, Harry Escott, Gill Sandell, James Brady and the Puffin Voices and we are promised music that “toys with our collective childhood memories, elegantly and eloquently immersing itself in the films, cartoons, books and legends which once fuelled our innocent imaginations”. Entry is on a pay-what-you-can basis and it takes place from 12:00-14:00.

We don’t talk about Café OTO as much as we should do in these previews but it’s another busy week at the Dalston venue. Their 8 day long Stereo Spasms festival celebrating the ninetieth birthday of composer Luc Ferrari kicks off on Thursday with appearances from Scanner, Thurston Moore, Tania Chen, David Toop, Xenia Pestova and others. They also have a two-day residency by German composer Eva-Maria Houben over Wednesday and Thursday (the second date takes place at the Old Church in Stoke Newington). Full details can be found here.

Finally, IKLECTIK is another venue specialising in experimental music that has appeared over recent years and they host a show by Erased Tapes-signed vibraphonist Masayoshi Fujita on Tuesday. More information here.

The Residents MP3s or CDs

The Residents on Spotify