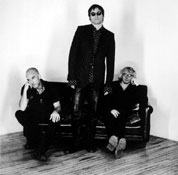 When R.E.M. emerged from Athens, Georgia in 1983 they immediately became an underground sensation. Over the last 20 years they’ve gradually become one of the biggest bands in the world, yet have always maintained a high degree of artistic integrity.

As the band’s 13th album is released, we caught up with bass player Mike Mills to hear his thoughts on Bush v Kerry and the secret behind the band’s longevity.

“Dear Michael”, I suggest as famous rock photographer Claude Gassian is trying to figure out what to write to autograph seeker Michael Stipe who, just moments before, was posing for him on the bed of a posh Parisian hotel, his head hanging over the edge of the bed. While Claude concentrates on this all-important piece of writing, I head to Mike Mills’ room. Very regal, I remark. “Too bad it’s not my room!”

The bass player is part of the institution known as R.E.M., fronted by Stipe, the world’s most enigmatic rock star. One of the most influential bands of all time, the group from Athens, Georgia virtually invented alternative rock, transforming the post-punk American underground forever and creating a number of trademark songs such as the Americana anthem Everybody Hurts and, of course, that song, “the one that put us over the edge,” says Mills of Losing My Religion.

R.E.M. have always tried pushing the boundaries of their sound way forward, as far as possible. The band’s latest album, Around the Sun, marks yet another departure. Emotional and uplifting, political and poignant. Stipe’s lyrics are still cryptic with that quasi-literary quality, yet more thought-provoking. National politics have renewed the band’s focus in this collection of folk-pop, rootsy, punk-spirited songs, reminiscent of Automatic For the People.

As the angriest pacifist in the world, he uses his lyrics to protest against the war (Final Straw) and the current state of world affairs, all wrapped in a glimmer of hope. “There is a lot of anger going on because we’re very distressed at our government right now,” explains Mills, “But as with most of Michael’s lyrics, there’s an optimistic note. He doesn’t like to paint too bleak a picture. If you have no hope, then there’s no reason to live.” And he has hope for November 2. “I think there’s a very good chance that John Kerry will win.”

“I’d vote for him, but I don’t think he’d do it”
– Mike Mills on the chances of President Springsteen.

R.E.M. and a host of other artists, including Bruce Springsteen, Pearl Jam and the Dixie Chicks, want to make sure he does in the Vote For Change tour, which kicked off on October 1. “It seemed like the most effective use of the time and energy of these musicians. We are in a position where we can do something about it, or at least try to do something about it.” They’d try even if they weren’t in a band. “Bono wants to make a difference in this world and I think that’s wonderful. We are politically very active people, but I think we’d be that way even if we weren’t in this band because it’s something we care about. But at the same time, knowing that you have the ability to make a change, or at least get a message out, then more power to you.”

Yet R.E.M. hits these political rallies on very rare occasions. “Most of our political activities are done on a private, individual basis. The Vote For Change tour is rare, even for us, because we’ve never come as a group and endorsed a political candidate, just like Springsteen never has.” I suggest The Boss for president. “I’d vote for him too, but I don’t think he’d do it.”

“He’s irreplaceable… it would not feel right”
– Mills on whether R.E.M. will ever replace former drummer Bill Berry.

So he’s voting Kerry. “I expect he would be a lot more pro-environment than the current administration. I think in terms of terrorism, he would try to unite the world against terrorism rather than uniting them against the U.S. He would act out of consensus rather than unilateralism. America’s becoming very conservative at this point, and religion is a part of that,” Mills continues, “There’s nothing wrong with religion, but when you use it to try and form policy, that’s when it becomes wrong.” His idea of hell is “four more years of Bush.” And if he gets re-elected? “The world’s not going to come to an end.” Tony Blair’s favourite band will still continue to make music.

R.E.M. has survived for over 20 years, despite the 1997 departure of drummer Bill Berry (“He doesn’t like to travel”), something the remaining three members found hard to adjust to. “I think it’s something we’ll be working on for the rest of our career.” Which may explain why they have no intention of replacing him. “I’d say he’s irreplaceable and we don’t want to. It would not feel right. We’ve got a great drummer now, Bill Rieflin, but in terms of making somebody the fourth member of the band, I don’t see that happening.”

“If you have no hope, then there’s no reason to live”
– Mike Mills strikes an optimistic note about the state of American politics.

Throughout two decades, they’ve remained focused, the key to their survival. “We’ve made our own decisions. We haven’t let other people tell us what to do. We all believe that the band is more important than our individual egos,” Mills explains. “And we’ve also been very lucky.” It’s all about the music, he explains. Laying much of the groundwork for many ’90s rock bands, R.E.M. have constantly reinvented themselves, progressing deeper into Americana each time. “Every album is representative of the year or two it took to make it,” says Mills, “Whatever is inside of you is what comes out on the record. But it’s not linear. I see us jumping around.”