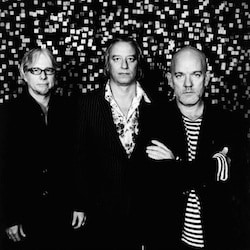 A mere few hours after their press announcement, thousands of words have already been written on R.E.M.s decision to call time on a musical career that has lasted over 30 years. Such is the rapid fire nature of the technological and cultural world in which we now live, a world that has changed immeasurably since R.E.M. arrived from Athens, Georgia with the new wave meets Byrdsian jangle of the Chronic Town EP in 1982.

Some of these words have been glibly uncharitable (according to many, they should have split 20 years ago) and some have proffered hyperbole about a cultural greatness so massive that its sudden loss deserved to usurp global political and economic news stories. With a bit of balance and perspective, it is at least fair to say that R.E.M. remained a hugely significant band for many people, with a signature sound immediately recognisable that yet withstood tumultuous change. They were that rare band that could speak to fans on a very intimate and personal level whilst also selling out enormodomes around the world.

The albums released on the IRS label in the 1980s, from Murmur through to Document, remain the core of the groups discography. With Murmur, that irresistible combination of enigmatic, sometimes incomprehensible pondering from frontman and lyricist Michael Stipe with memorable arpeggiated guitar riffs from Peter Buck and dogged, propulsive drums seemed to appear fully formed. The languid Perfect Circle also pointed the way to the acoustic balladry that would later see the band reach a whole new audience after signing with Warner Bros. Perhaps its the second album Reckoning that remains the groups most influential, if not their biggest selling. Its a perennial fan favourite, and one treasured by many other alternative musicians, including Stephen Malkmus of Pavement.

Now something of a critically acclaimed cult, the band faced their first major challenge with the recording of their third album Reconstruction of the Fables (or is it Fables Of The Reconstruction?). Decamping to London to record with legendary producer Joe Boyd (Fairport Convention, Nick Drake), the band further mystified their sound, adding a strain of gothic folk and, from the opening notes of Feeling Gravitys Pull (sic), an unfamiliar harmonic tension. For some, this remains a difficult record, but the band themselves grew to love it. Years later, they would celebrate it at the centre of what was, for them, a rather modest show at Londons Brixton Academy. Its one of their most idiosyncratic and beautiful recordings.

After Fables, the group seemed to develop both a sonic and a political urgency. With Lifes Rich Pageant and Document, the sound got tougher and more muscular, with Stipes vocals given welcome prominence. With the first words of Cuyahoga (lets put our heads together and start a new country up), the band gave a hint of the firm commitment to Democratic politics that would remain for the rest of their career. Document featured further political ruminations in the form of Exhuming McCarthy. The latter album also featured the two songs that founded the groups new reputation as a mainstream rock act – the dense, turbulent half-nonsense, half-inspired call to arms of Its The End Of The World As We Know It (And I Feel Fine) and the barbarous The One I Love, still to this day misinterpreted as sincerely romantic song.

Following this came Warners, a string of multi-platinum albums beginning with Green, an occasional penchant for slightly silly pop songs (Stand, Radio Song, Shiny Happy People, The Sidewinder Sleeps Tonite) and stadium shows, at least at first. In fact, one of the things that made the success of Out Of Time and Automatic For The People so remarkable is the bands stubborn refusal to tour them. The band clearly viewed their reflective, sometimes sombre songs as unsuitable for the stadium environment. Although its arguable that these albums have to some extent been overrated, they contain some truly extraordinary songwriting, breathtaking in its unflinching honesty. Theres the angry invective of Ignoreland, the haunting Find The River, the devastating Losing My Religion (a painful tale of unrequited love that may just be the most harrowing song to have become a popular standard in the whole of the ’90s) and the glorious, honey-drenched Near Wild Heaven, a showcase for the frailer, but affecting vocals of Mike Mills. There was also, of course, the thoroughly ubiquitous heartstring-tugger Everybody Hurts, a song largely written by Bill Berry.

After Automatic, the band were clearly at a loss as to how to respond to their worldwide superstardom. Eventually, they returned with the strident glam rock-meets-grunge Monster. It remains a divisive album – loved and loathed in equal measure – and, at least with the benefit of hindsight – the start of a long commercial decline. For those with an open mind, Monster was a deliriously entertaining beast, with moments of touching introversion (the Kurt Cobain-inspired Let Me In, for example). In the form of Strange Currencies, it also featured a classic R.E.M. jangly ballad.

The band returned to touring, performing beefed up versions of earlier songs (including a remarkably crunchy take on Drive) and revealing that Peter Buck had never in fact thrown away the mandolin after all. A big turning point for the group was the brain aneurysm suffered onstage by Bill Berry in Switzerland, a massive shock for Berry and the rest of the group that delayed the tour and possibly reconfigured Berrys personal priorities.

In 1996, the group released New Adventures In HiFi, a perenially underrated gem recorded whilst on tour. Its a long, frequently dark album with a very murky sound courtesy of having been recorded largely in soundchecks and in concert – but it works brilliantly. That year, the band also signed a massive US$80 million dollar deal with Warners. Again in retrospect, this may have been the height of major label hubris, as the band were unlikely to ever repeat the enormous success of Automatic For The People and the music industry would soon be threatened by technological changes few could possibly have predicted.

Warner probably had not been banking on the departure of Bill Berry, who left the group for a quieter life on his farm. He was never officially replaced, although the band has since been augmented by drummers Joey Waronker and Bill Rieflin (it is also worth saluting the major contribution made to the group by other instrumentalists including Ken Stringfellow and Scott McCaughey).

Understandably, perhaps, the groups internal relationships at this point became fractious. The resulting album, Up, was hailed at the time by the group as their finest to date, but very swiftly near-disowned. For many fans and critics, it marks the point at which R.E.M. stopped trying to be R.E.M. For those with receptive ears, the use of analogue synthesisers and keyboards created a warm, inviting sound and the album contained some of Stipes most personal and affecting songs (it was more than mere coincidence that the albums release coincided with Stipe finally coming out as bisexual). Its an unusual, strange and ultimately beguiling album clearly borne from a period of confusion and frustration. With Pat McCarthy usurping Scott Litt as the band’s producer of choice, it opened a new chapter in the story of this most resilient of groups. At the very least, it deserves a decent reissue package and some serious reassessment. It may be their unsung masterpiece.

After Up, long intervals between albums became the norm as the group toured incessantly, reinventing themselves as a dependably excellent live act. Stipe became more and more of a showman, decorating himself with face paint and developing increasingly wacky dance moves. Their recorded output, however, became more problematic. Reveal is probably the real start of the rot – an album stuck between wanting to push the electronic experiments of Up to their logical conclusion and also wanting to be a simple, appealing, summery pop record. Its all overwhelmed by a glossy production sheen and is weighed down by too many underwhelming songs preoccupied with banal observations about nature, although its highlights remain great (Imitation Of Life, Beat A Drum and Ive Been High particularly).

Perhaps with financial and corporate pressures bearing down on them, the group became almost obsessed with repeating former glories. Around The Sun sounded like a neutered version of Automatic For The People, its rumoured anti-war political sentiment only really felt on one song (Final Straw). The album has its intriguing moments (the deeply odd High Speed Train and the compelling Boy In The Well), but its consistently leaden pace and fairly transparent writing almost as if on commission proved major problems. And yet the group still retained enough commercial and critical power to join Bruce Springsteen on the Vote For Change tour, in many senses a milestone moment in their career.

R.E.M. then took another long break after the ensuing tour and reacted to the albums poor reception. Understandably, Accelerate received some glowing reviews for capturing the band as a re-energised rock band and for being mercilessly concise in duration. Its a superficially appealing album, but Jacknife Lees super-compressed production and the over-reliance on distortion in place of any more original approach to sound make it a bit of a one-trick pony. For some, Collapse Into Now, now the groups final album, is a satisfying summary of all their major musical concerns. For others, its an uninspired sleepwalk of a record, badly produced and lazily executed.

It had begun to seem if R.E.M. might become a new version of the Rolling Stones, trundling on for ever and relying on lucrative tours as their recorded output became more and more routine. At the very least, it seemed like they respected their fans enough to end on a high note. Sadly, theyve chosen to bow out at rather a low ebb, without allowing their fans one final chance to see their always fantastic live performances.

Given that, in spite of the many complaints leveled against them, they have actually been an extraordinarily consistent band, R.E.M. will be hugely missed, especially as the bewilderingly popular U2 juggernaut rolls on with increasing predictably. Even R.E.M.s weakest albums contained moments so distinctive and entrancing that they could only have been the result of the collective talents of the groups members. Some of their albums are justly treasured and will remain so, others are in urgent need of critical reappraisal. Always so much more than the sum of their parts, they must be remembered as one of Americas very greatest guitar bands, one whose enduring appeal transcends generations. In Michael Stipe, they had a frontman who managed to be both elusive and charismatic – and who could be effortlessly moving even when singing total nonsense.