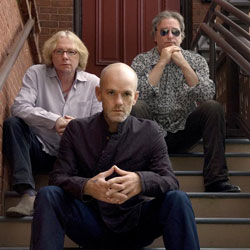 R.E.M. are set to celebrate 30 years in the business, but new album Accelerate’s 35 minutes of cranked-up electric guitar suggest this is not a band winding down.

And in a US presidential election year, the band’s celebrated front man Michael Stipe has plenty to speak of when it comes to politics.

“Sorry, I’m obsessing with the light!” Michael Stipe keeps yanking at the curtain in his hotel room. Not only is the room badly lit, but the gray clouds lurking in the sky are blocking preventing any soupcon of sunlight from seeping through. Elegantly dressed in a dark suit, his big turquoise eyes shining like laser beams, his mannerisms hint at the part of him that is a diva.

Yet the singer is friendly and very passionate about R.E.M.’s 14th, and possibly best, album in years. Accelerate is a fast-paced, raw guitar-laden rock album with Stipe’s passionate and politically tinged lyrics, largely making up for 2004’s rather disappointing (read boring) Around The Sun.

That uninspiring album could have led to the demise of the band: Stipe once said in an interview that he would quit if R.E.M. ever made a crappy record. “Yeah, that might have been taken out of context. I think what I probably said was that if we started to suck, hopefully we would know before the audience did. I think the worst thing you can possibly do is be mediocre, you know? It’s almost better to do something that’s so bad that no one knows it’s bad than to be mediocre. Nobody wants to be boring. Would you like some water?”

As he quenches his thirst, he explains the rebirth of R.E.M. as a rock band. And it’s all about focus. “I think we decided to create a new set of rules to record because it felt like we had lost focus on the last couple of recordings. The songs worked really well live and I think the songs are great songs, but we lost our way in the studio. So we created a new rulebook on how to record to present something that’s right in your face, raw, stripped down and fast. I think when the band was writing the music – which comes first, before the lyrics – they had that in their mind.”

Both bassist Mike Mills and guitarist Peter Buck were eager to put their instruments to good use this time and return to their original vocation as a rock act. “We tried to cut the tracks as live as possible,” Mills had told me earlier, “and Peter and I agreed when we went into this record: ‘Let’s try to write only on electric guitar. Let’s not write on acoustic or on piano or anything like that. Let’s make an electric guitar record.'”

“Exactly, because it changes the song you write. You tend to write a different sort of song on electric guitar than you would on acoustic guitar.” Stipe left it up to them to revive the band’s music, which had grown a bit somniferous over the past few years. “Peter and Mike both thought fast songs, raw and stripped-down in-your-face. The sort of music that they gave me to write to was much more like that, and that”s how I think the record was born.”

It was also perhaps because they realised that making folksy records like Around The Sun was not, well, fun to perform live. Nor to hear. “The fun thing about being your own boss is you get to play with whatever type of music you want,” Mills had told me earlier. “And so, every few records we’d go into something a little different. When Bill [Berry] left the band, we tried not so much to keep being a rock guitar band because it didn’t feel right. We did something else for a while. And then, on that last tour that we did, we had so much fun we felt like a band again, like a rock band. So we said, ‘Let’s make a rock band record.'”

This renewed enthusiasm can be traced back to a series of five shows R.E.M. performed in Dublin last year, where the band counts its biggest fan base. These semi-legendary concerts were decisive in planning on the album’s new direction. “Yeah, at that point, we already had quite a body of work. We had nine songs, I think,” remembers Stipe. “The trajectory had been set at that point. But the Dublin shows made us feel like we were definitely on the right path ’cause Irish audiences are not very easy. They’re huge fans of R.E.M. but they speak their mind.” Like Bono and The Edge of U2, who were part of the notoriously critical audience. “Yeah, and they were harsh on us and direct!” he laughs. “But, you know, they’re great friends!” And that’s what friends are for. Especially if they’re from U2. “Yeah, exactly!” Edge even recommended producer Garrett ‘Jacknife’ Lee.

Speaking about the hot producer, Stipe almost makes it sound as if he has flattered his ego and given a ‘fan’ a chance to work with them. “As an R.E.M. fan, he wanted to be part of a record that would be historic or that it could be one of the great records that we make. I think he wanted to shake things up a little bit, and so he did that. The main reason I thought he would really be great to work with is that he had really great taste in the other bands he had chosen to work with. I looked at the records that he’s made and I thought, Bloc Party are great, Snow Patrol are great, U2 are great, Kasabian are great. The guy’s got really got specific taste and a great sound. So now we have a new friend.” Not a bad way to renew interest in the 28-year-old band. That’s two years away from the Big Three-O. R.E.M. is one of the few major bands who have made it past the 20-year mark.

One of the reasons older bands are still enjoying success is because of their willingness to change with the times. In the world of downloading, whether legal or not, R.E.M. are fully embracing new technology. Record sales have become unimportant, and Mills agrees that music has taken a dramatic change. “Obviously, the entire music business is changing and certainly technology – the Internet – that’s all going to be a part of whatever the future of music is. So yes, we move with that. These are fun, these are good things. You tend to use whatever tools are available at the time. Back in the day, you would use only radio, then there was MTV and the video, and now there’s the Internet and the technology. Whatever is available as an artist is what you have to use.”

It seems ridiculous now to think of video’s threat to the radio star. It never killed it, and neither will the Internet, quips Mills. “I think the record companies did a very poor job of dealing with the Internet. They tried to pretend it didn’t exist and then they tried to quash it. Both of those things were wrong. If they had embraced it as it became a force, then I think things would’ve gone much smoother. Music’s never going away – it’s just how people hear it and see it and find it.”

Other people also see politics in it. Like Around The Sun, Accelerate has been released on an election year. Considering Stipe’s friendship with rock saviors such as Bono and Springsteen, one wonders if it’s mere coincidence. Especially when we hear Stipe’s politically-tinged lyrics on some of the tracks. Houston, for example, is an attack on Barbara Bush after her senseless comments in the aftermath of Hurricane Katrina. “She made the ‘let them eat cake’ comment of the 21st century. Unbelievable,” Stipe says. “Unbelievable even more that this administration and the people of my country allowed a major metropolitan city to be wiped off the map. Individual people tried really hard to help. My father, up until two weeks ago, was taking trips with his church to build homes in Mississippi that were destroyed by Hurricane Katrina. I’m so proud of him! He’s 74. He doesn’t need to be climbing a ladder and building a home, but that’s what he does.” Stipe isn’t too crazy about Barbara’s son Dubya either.

“My choice of candidate is Barack Obama. I think he’s a tremendous potential leader and force.”
– Michael Stipe adds his endorsement for the Democrats’ presidential hopeful

“Bush is going so that’s good, but the results of his tenure in the White House will be with us for my lifetime at least. So my hopes for this election are pretty complicated, but I think there’s a simple solution and my choice of candidate is Barack Obama. I think he’s a tremendous potential leader and force. I love what his election would represent outside of our borders, what it would signify to the rest of the world for us to shift that dramatically from what I think is, within the Washington D.C. scene, a kind of bought-and-sold system of governing whereby people that are there for a long time become weighed down by the favours that they owe, by the number of people they owe things to.”

But what I really want to know is whether there will be a birthday bash in two years. Fishing for an invite, I ask him if they are planning one. “We didn’t even talk about that. In two years’ time, I’ll be 50. That might be something more worthy of celebrating than the band being together for 30 years!” he laughs. I have rarely met a person looking forward to middle age. “It gets easier as you get older,” he confides. “It gets easier and better.”