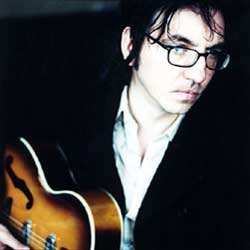 He’s played guitar for All Saints and Robbie Williams. He was a member of The Longpigs. Now he’s supplementing his day job as an unofficial sixth member of Pulp with a solo career that’s taken off this year with the albums Richard Hawley and Late Night Final.

Before he does anything else, musicOMH decided to catch up with Richard Hawley and attempt to find out what makes the man tick…

musicOMH: You started your career very early, playing in your uncle’s band at 14. What was it like, touring at such a young age?
Richard: It was better than school and quite an adventure, however, I wouldn’t advocate kids skipping school – not everyone is lucky.

musicOMH: You’ve waited a long time to come into the spotlight. Were you writing songs all the time you were playing in bands such as The Longpigs and Pulp?
Richard: It was an accident that I started singing and yes, always. But quietly in a corner.

musicOMH: You’re known as a brilliant guitarist, but you also have that amazing voice – how come you’ve never used it with bands in the past?
Richard: They already had a singer and I didn’t think anyone would like me warbling on.

musicOMH: How do you go about writing your songs? What gets you writing?
Richard: I hope I never know the answer to that one.

musicOMH: Does songwriting come easily to you?
Richard: Yes.

musicOMH: You once remarked that you write ‘dodgy cowboy songs’. Has the warm welcome you’ve received since going solo surprised you?
Richard: It’s bowled me over totally. I thought you’d all hate it.

musicOMH: You seem to have a great supporter in Jarvis Cocker. Did he encourage you to strike out as a solo artist?
Richard: Yes, he’s a pal. He just thought it should be released & he’s a good support man to have in my life.

musicOMH: Late Night Final was very well received, the new single is being widely played and you’re about to embark on your first headline tour – are you very pleased with the way your career is going or would you have had it a different way given the choice?
Richard: Again, I’m surpirised that people like it, I just don’t want it to run out of control and get into corporate hands. Over my dead body.

musicOMH: What music do you listen to when you’re at home and relaxing with the family?
Richard: It tends to be “Old McDonald had a farm” on the kid’s tapes. My wife likes Spiritualized and Lemon Jelly amongst others and I love old country and blues stuff. Jim Reeves and a can of Guinness relaxes me most evenings! Easily pleased, I am!

musicOMH: What’s been the best moment of your career so far?
Richard: Well, headlining Glastonbury with Pulp springs to mind but there are others.