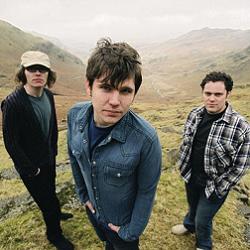 It comes as no surprise to observe how Scouting For Girls’ music appears to reflect the band’s personalities. And in the case of the trio’s bass player Greg Churchouse, that personality is one of ebullience and a wide eyed innocence.

He’s graciously bowed out of a potential lunch break from sound checking on the band’s UK tour to talk to musicOMH. So how are things?

In an uncanny quote from a rival band, Churchouse says, “Well it’s a bit delicate at the moment – everything’s going really well, but we’re all worried about Ray” (Stride, the band’s singer). We’re getting ready for tonight’s gig and everything’s going well, but he’s been really suffering with his voice lately and has had to take it easy. He’s had laryngitis, and we had to cancel three gigs because of it, but fingers crossed it’s going to be all good from now on. He’s staying in hotels and having to not speak during the day – he’s like a little china doll bless him.”

It’s worth taking a bit of time out to appreciate just how sudden the Scouting For Girls success has been, with She’s So Lovely catapulting them towards the top of the album charts. All of which is a far cry from when Roy and Pete first met in clubs, when they were still at school. “We’ve been friends for so long that nothing’s really changed! Myself and Roy are often glancing over to each other while we’re on stage – we’ve been together and playing for ten years but we’re looking in bewilderment!”

And on that sudden rise, he remembers “when we got a couple of weeks off over Christmas, and weren’t expecting to do much – then the album suddenly sold bucket loads and the single was getting played everywhere, on Radio 1 and everything – it was totally mad!”

“We got a couple of weeks off over Christmas, and weren’t expecting to do much…” Greg Churchouse reflects on the sudden elevation for Scouting For Girls.

Throughout our interview it’s clear Greg intends to remember at all times how fortunate he is. “I think we all feel really privileged to step out on that stage, and for us it’s about putting on as good a show as we can. We’re just four happy, smiley blokes who like going out and having a good time!”

Talk inevitably turns to the band’s summer plans, and it’s a case of festivals, festivals and more festivals. As is his way, he laughs brightly. “Yeah, we try not to think too far ahead but we have got a few coming up. Glastonbury, Isle Of Wight, V, T in the Park, Oxegen, Belledrum – I think there’s more as well.” He has fond memories of the band’s appearance at Glastonbury in 2007, considerably further down the bill. “It was fantastic. We got to play last year, and it was only to about a hundred people! We were really lucky as we played on the Friday, so we had the rest of the weekend to enjoy the festival. Actually, I’m having trouble recalling who we went to see, I’m trying to remember through a haze of pear cider. I do remember the Killers, and Shirley Bassey was awesome!”

It’s difficult not to feel the bassist’s infectious enthusiasm as he talks about the benefits of doing something you love. “I’m not meaning to sound really smug, but to do this every day – it’s the greatest kind of job you could wish to do. The only down side I suppose is that you don’t get to see your friends or family, or spend as much quality time with people, but we all know how lucky we are.”

So what’s the best thing that has so far befallen the group? Jumping in feet first with his answer, Greg exclaims “Meeting Tony Hadley. Pete is a huge 80s fan, and we did a party and he was there. We were so in awe of him, it was actually a bit embarrassing as we didn’t know what to say! We also got to meet Michaela Strachan.”

“To do this every day – it’s the greatest kind of job you could wish to do” – Greg’s starry-eyed relfection on where Scouting For Girls find themselves at present.

Not a remarkable statement that, you might think, but the animal-loving TV presenter and Scouting For Girls have history, through Stride’s ill-fated crush on her. Churchouse, however, brings good reports of their meeting. “It was lovely to see her, and she’s been actually completely wicked to us. When she heard about the song she e-mailed and apologised for breaking our hearts!”

Discussing their post-festival plans, Greg mulls over the options for a nano second. “This year is gonna be lots more touring, festivals, and international promo. We did a short tour in Ireland, but we’ve also got some time in Holland, and we’re off to Australia soon, which I’m really looking forward to.” Do they have plans for a second album? “We’re concentrating on the current one for now, but we’ve got a good lot of new material for when we do start recording.” Any surprises in store? “I expect we’ll try a similar approach, but we might well try a few surprises too. We’ll have to wait and see.”

Giving little away about the band’s new material, Churchouse is however happy to big up his favourite acts of the moment. “There’s so much really great pop music out there at the moment, it’s a great time for bands. At the moment I love The Wombats, the Pigeon Detectives and Kate Nash. It’s such an exciting time, and it’s a real honour to be part of all of that.”

In fact it’s such a whirlwind that Churchouse has forgotten the band’s itinerary completely this time. “I can’t actually tell you where we are tomorrow. But what I do know is we get a hotel on our day off, and I can’t wait for that!”