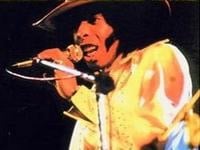 Well, he’s back. With public appearances about as regular as Halley’s Comet, many thought Sly a long-gone casualty found DOA at the gack wing of Rock Star General Hospital.

So when Sly And The Family Stone recently announced European dates, it seemed as likely as Elvis and Frankie Sinatra uniting for a last hurrah at the North Korea Carling Academy.
But though the band headline at London’s LoveBox festival this summer, you may be forgiven for asking: “Just who the funk is this Sly Stone anyhow?” Well, just let musicOMH take you higher…

At the cusp of the ’70s, Sylvester Stewart of Vallejo, San Francisco had the world at the heel of his glitter-boots. Under the nom de plume of Sly Stone, his band The Family Stone had blown the Woodstock festival apart.

Captured by the Michael Wadleigh’s’ documentary, Sly And The Family Stone stranded many of the other acts’ in a tie-dyed 60’s. By contrast, the dynamism of Sly’s band opened up an expressway into the next decade.

Glowing cobalt blue and cocaine white against the black Bethel nite, Sly mumbles, grumbles and rumbles something about everybody ‘looking for approval’. His sideburned face inscrutable behind Brundle-fly shades, Sly preaches liberty and individuality over the boogaloo polyrhythms.

Sly exhorts the muddy crowd to punch the air. They all want to be taken higher. Sly wants to take them there. And then there’s just one place to fall. The nicer the nice, the higher the price.

As a radio jock in San Francisco’s Bay Area, Sylvester Stewart was already a local face even before he produced records for Bobby Freeman, the Beau Brummels and The Great Society at Autumn Records. Playing with his own band, it wasn’t long before he joined up with brother Freddie to form Sly And The Family Stone

But with early recordings reflecting an unformed faddism and Coasters-style doo-wop and roll, Sly had work to do to catch up.

A wizard multi-instrumentalist, Sly positioned himself on keyboards along with sister Rose, allowing brother Freddie the guitar. With Jerry Martini and Cynthia Robinson on horns and Gregg Errico on drums, the band was completed by the unique talent of Larry Graham, credited with the invention of the slap-bass technique.

“There are two kinds of black music: before Sly Stone, and after Sly Stone” – Joel Selvin, Sly And The Family Stone: An Oral History.

Though The Chambers Brothers were probably the first true multi-racial pop group, Sly’s troupe were the first where the breaking down of a musical apartheid ran implicit throughout the music. From the bottom-up of Graham’s rubber-band basslines, Errico’s rock-solid drums, and Freddie’s fuzz-toned guitar, Sly’s band were a revelation and a revolution

Signed by Epic, it took a while for The Family Stone to hoist their name above the likes of touring partners Peaches & Herbs. Under pressure from the record company to make a commercial record, Sly came up with Dance To The Music, a rallying amalgam of horn-blasts and snares fuelled by Sly’s trademark scream and showpiece handovers from player to player.

Their first album heralded A Whole New Thing, but it would be another three albums before Sly honed the lessons of Dance To The Music to an irresistably cohesive musical vision.

1968’s Stand! was the calling card. Ushering at the prime of Hippie, Stand! housed anthems that were as close a manifesto of peace, love and brotherhood (not forgetting sisterhood) as anything else the era created.

Everyday People and Stand! itself were upright anthems of social mobility disguised by sucker punches of nursery rhyming (‘The butcher, the baker, the drummer and then / Makes no difference what group I’m in’).

Aimed squarely at an egalitarian dancefloor, You Can Make It If You Try and Sing A Simple Song promised that salvation could be found in an epigrammatic songtitle when hit home with a beat as hard as a breezeblock and a rhythm as fluid as H2O. With that, Sly’s music became a blueprint for decades of dance music therafter.

Stand! put Sly in the big leagues, at least in America, where a faithful black audience had now been joined by a national community of whites. Sly’s sales now rivalled those of The Beatles and The Rolling Stones.

Along with Jimi Hendrix (who liked to vamp Sing A Simple Song’s punctuated riffs into his own sets), Sly had become one of the first ‘crossover’ acts, catapulting Sly onto the bill of Woodstock.

“…Sly was less interested in crossing racial and musical lines than tearing them up” – Greil Marcus, Mystery Train.

For the singer at least, Stand!’s true legacies were the self-directed warnings inherent in the paranoid Somebody’s Watching You (“Ever stop to think about a downfall? / Happens to the foolish all the time”).

But the downfall wasn’t immediately apparent. If anything, the new success inspired Sly to new levels of creativity. Pioneering the use of new commercially available drum synthesizers, Sly set up Stone Flower productions, a typically Sly-ish way of making new records away from the constrictions of his recording contract with Epic.

Amongst these were Little Sister‘s skittering version of Somebody’s Watching You, the first chartbound record to feature a Rhythm Ace, the aforementioned drum computer.

Though a new album now lagged as much as Sly now did in turning up for gigs, 1970’s No 1 US single, the breathless Thank You (Falletinme Be Mice Elf Agin) came out of the blocks with the graceful energy of a genetically-engineered greyhound.

Graham’s pistol-sharp bass kickstarted proceedings, but trouble and doubt lurked menacingly in the verses, redolent of a grubby comedown.

When Sly sang of ‘running with the devil / grinning at his gun’ clearly games of Russian Roulette were being played with the status that Sly had worked hard to attain.

Now holed up in a Beverely Hills mansion rented from John Phillips of the Mamas & Papas, Sly began recording The Incredible And Unpredictable Sly And The Family Stone shortly to be re-titled There’s A Riot Goin ‘On. There was company of all kinds, particularly of the chemical variety.

Although much of the kudos must go to James Brown, Sly achieved a major co-credit for the creation and popularisation of the nascent Funk music around this time. A dense and highly-structured dance music, the Funk sound was prioritised by Graham-style slap bass and patterned, riff-crazy rhythms exemplified by the famous Clyde Stubblefield ‘break’ in Brown’s Funky Drummer.

Funk compilations of the period are littered with variations of the JB / Sly funk blueprint. Legend has it that Motown’s Berry Gordy railed against his own staff, brandishing the Stand! album as ‘the future’. Norman Whitfield’s Temptations were the most obvious inheritor of Sly’s innovations, but many more followed.

“While Marvin Gaye was making What’s Going On…, Sly was highlighting his pessimism by sardonically pointing out that nothing was going on” – Peter Shapiro, Turn The Beat Around.

But if fans were expecting the nervy bump ‘n’ grind of Thank You or the popcorn-rush of The Jackson Five‘s I Want You Back, they were to be sorely disappointed by There’s A Riot Goin ‘ On. Rather than homespun flower-child philosphies, Riot…virtually trademarked superstar disintegration.

Hallmarked by a hissing murk present throughout the album, lead-off 45’s Family Affair and Runnin’ Away were shot through with cold-hearted dualism (“one child grows up to be somebody that just loves to learn / another child grows up to be, somebody you just love to burn), and a ghoulish fatalism (“the deeper in debt/ the harder you bet”).

The album gave few answers. If the music was to represent America as much as the doctored stars ‘n’ stripes of the cover, then the “frightened faces on the wall” of Brave & Strong and the “feel so good / don’t need to move” of Luv ‘N’ Haight suggested a nation paralyzed by inertia, fear and solipsism.

The stories of Sly’s LA hideout are now as much a part of legend as Riot itself. Cocaine and the use of Angel Dust (PCP) contributed to an atmosphere of paranoia and gangsterism. Sly’s fondness for vicious dogs led to an almost fatal mauling of his new-born son.

Worse, Sly’s own henchmen allegedly tried to ‘off’ Larry Graham, who left to form his own Graham Central Station. Relationships with the band were estranged to say the least, with Riot mainly the work of Bobby Womack, Billy Preston and of course Sly himself. Like Mario Puzo’s Godfather novel, the family was unravelling from within.

The album’s infamously swampy sound is often claimed to be unintentional, the result of relentless overdubbing with Sly removing the layer-upon-layer of girlie backing vocals. The unconfirmed received wisdom has it that Sly had promised air-time on the record in return for sexual favours.

By the time 1973’s Fresh arrived, Sly’s pockets had been as good as emptied by his coke habit and self-indulgences. No-shows and haphazard, non-committal performances had earned the ire of promoters everywhere. The original Family Stone were a thing of the past. Despite that, Fresh is as landmark a record as Riot and Stand!

“Sly’s effect on the sound and style, the punch and attitude, the why and what of modern music has been dramatic” – Paul Morley, Words And Music.

Though a new Family Stone were reputed to be in situ, once again Sly is said to have played much of the instrumentation himself. Sly’s continual use of the drum computer overlain with a thesaurus of growls, gurgles and screams, streamline Riot’s grainy funk into something far more economical.

Though bootlegs of the album suggest that Sly was far more innovative at this time than the official release of Fresh would point to, Thankful ‘n’ Thoughful, Frisky and Skin I’m In are the last sightings of Sly’s id gloriously colliding with his ego. In Time is man, machine and drummer in symbiotic harmony.

And after that? Well, not much… Small Talk followed shortly thereafter. Much funk-by-numbers awash with strings so soupy Campbell’s might sue, and overshadowed by Sly’s Posh-and-Becks-style wedding at Madison Square Garden to model Kathy Silva.

Bankruptcy beckoned. Word was Sly turned up in alter-ego form on mid ’70s Temptations albums, though he definitely did perform on Funkadelic‘s The Electric Spanking Of War Babies.

Comeback albums came and went, from the decent High On You to the execrable Heard Ya Missed Me… Well I’m Back. As a presence though, Sly never truly disappeared. His yin-yang career holds fascination for those looking for positive inspiration to those looking to indulge in a weekend’s casual abyss-staring.

An appearance at last year’s Grammys showcased a man in leathers and a peroxide mohawk, but he last toured, disastrously, in 1987. And now he’s back, On the Right Track even. Now over 65 years old, it would be naive to expect anything but a frail echo of the man he used to be…

But to paraphrase the man himself, there are many willing to give slack to this deserter.