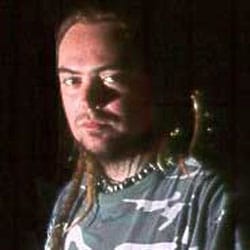 Soulfly’s frontman Max Cavalera is one of the noisiest men on Earth, but he’s surprisingly soft-spoken when talking about Soulfly 3.

Metal’s answer to world music, the album is more bloody roots, more Brazil – and it uses more instrumentation than the band’s previous work.

But there is also silence – 9-11-2001 (One Minute of Silence) speaks more than any other tear-jerking tribute.
musicOMH caught up with Cavalera for a chat about the World Cup, world music and the World…

musicOMH: Did you watch the World Cup final?
Max: I watched all the games that Brazil played.

musicOMH: You wanted to be a pro player. Do you still play?
Max: For fun, nothing professional. I can kick the ball. I have a bigbackyard. I play with my kids. But I kind of enjoy more watching thanplaying. Playing is really boring. I have all of Pel’s games from the ’70s.

musicOMH: Would you have become a Pel if you hadn’t become a rock star?
Max: I had the passion, the thrill. I don’t know how good I would’ve become,but it’s not really about how good. I think it’s about if you enjoy playing.

musicOMH: You’re the Pel of the metal scene. Did you think you’d get tosuch a rank?
Max: Yes and no. I never expected to go this far, but I look at things likethat and I think I took chances and I did things some people wouldn’t do,and I feel proud of it.

“It’s a little bit more mystic. It’s the trinity of the past, the present, the future…”
– Max waxing lyrical about the number 3

musicOMH: Like what?
Max: [Living with] the tribe in Brazil…those things were reallyunorthodox. Many musicians, I don’t think they were really up to that. Itwas a strange experience. Many times, it was rough ’cause you were in themiddle of nowhere with these indigenous Indians. There was no shower; it wasuncomfortable at times. But it was very cool for me, because, like, this isthe roots that I can feel. So because I took those chances, I feel that alot of these musicians and bands, they look up to me. I feel proud.

musicOMH: Is three a lucky number for you?
Max: It’s a little bit more mystic. It’s the trinity of the past, thepresent, the future. You can find many other things that combine…there was aring to it. And the other reason was that I was delayed in finding a name![For] the next album, I have to think really hard to find a good name,because I won’t be able to get away with Soulfly 4!

musicOMH: It’s more melodic that what you’ve done before. Are youmellowing down?
Max: A little bit. See, I don’t need to be like some of those guys outthere. They get a little older and they need to prove they’ve still got it,they’re still bad-ass. I feel like I want to be my own person, my ownmusician. So I go to tradition, and it is the stuff I listen to. I went todo things like Tree of Pain and Soulfly 3…took it to a whole otherplace, which I’m not afraid to be – fragile, kind of like Che Guevara, youknow?

musicOMH: There is a poignant story of shared pain in Tree of Pain…
Max: It’s three people that share a tree and a similar pain, which is losingsomebody close in their lives and talking about being afraid. It’s probablythe most realistic topic I ever touched with other people.

musicOMH: There’s a cover of the Chico Science song Sangue deBairro (Blood of the Bairro). Is that a true story?
Max: It’s a true story. He’s one of my favorite artists from Brazil. Hewrote two albums, maybe the two most innovative albums in the last decade ofBrazilian music. I just thought that the way Chico did that song was reallygreat. It was really, really delicate and exciting…and I think people likethat I sing in Portuguese.

musicOMH: Are you spiritual?
Max: Yes, but once you admit that, some people have a different idea. It’sjust like saying, “Are you only a rock ‘n’ roll player?” I really can’texplain, because I draw from many different parts of religion, not oneitself.

musicOMH: Roy Mayorga’s back. Did his comeback affect this album?
Max: No, I always say I’m happy he’s back, but I’m the real fighter in thisband. If all of them leave, I’ll find someone to keep the noise. I have thisguitar, I think about my music no matter what. But I’m glad he’s back,because I like the way he plays.

musicOMH: What do you listen to nowadays?
Max: New stuff like Ill Nino, people from world music.

musicOMH: Do you ever intend to cover any Snot songs during alive show?
Max: I talk to Mikey (Mike Doling, Soulfly guitarist, formerly ofSnot) all the time, but I think we need more time to practice, because it’sa different kind of music.

musicOMH: What name did you use to register in this hotel?
Max: I’m under Bernie Lomax. It’s a really cheap comic movie called ‘Weekendat Bernie’s’ about this guy that dies and they drag him around. When theylisten to music, he gets up and walks around. It’s a dark comedy, so I’mhim!

musicOMH: I thought maybe Ronaldo…
Max: No, that would be too easy. My favorite one was Muhammad Ali. That wasin our hotel in Germany. There’s a knock on the door and it was the managerof the hotel, and he’s like, “Mr. Mohammad Ali is in this room?” And I go,”You’re talking to him.” I explained to the guy. [He was] reallydisappointed. I thought it was funny.