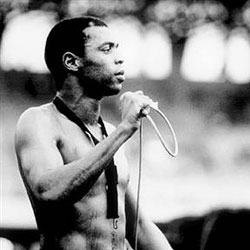 Mention the name Fela Kuti to your average supermarket music fan and you will be met with a blank stare. Even the more clued-up listener may struggle to place the late Nigerian musician and composer. This, of course, is a crying shame, as the indefatigable Kuti was a so-called ‘world’ musician whose influence extends far beyond the narrow confines of that outdated tag.

Born into a middle-class Nigerian family, Fela turned his back on a medical career to study music when he travelled to London in the late ’50s. His musical career began in the early ’60s with the band Koola Lobitos, with whom he began laying down the groundbreaking fusion of African highlife, jazz and funk. It was after returning from the USA in 1969 that Fela rebranded his music Afrobeat, and it was this dizzyingly exciting style that he and his band (renamed Nigeria 70 and then Africa 70) would hone to perfection on a series of brilliant albums during the ’70s.

Kuti was fizzing with ideas during his artistic peak, setting up the Kalakuta Republic (a commune/studio/nightclub) in Lagos and performing incendiary sets at the Afrika Shrine. His shit-hot band included the formidable drummer Tony Allen, who would later leave Africa 70 in a dispute over royalties, taking many of the musicians with him to start an acclaimed solo career that continues to this day.

Fela’s political stance became more and more radical with each year, and his outspoken stance and support of the rights of Nigeria’s underclass attracted the heavy-handed attention of the police and government. Frequent raids were made on the Kalakuta compound with the sanction of the ruling party, and he spent a brief period in exile in Ghana in the late ’70s.

It is easy to consider Fela as the African equivalent of Bob Marley although he never achieved Marley’s global success. Fela’s records never replicated the commercial breakthrough in the West that the Jamaican achieved, with his penchant for lengthy 10-minute plus tracks lacking the same widespread appeal of Marley’s succinct reggae anthems.

Fela’s heart beat with the same rage and fury at social injustice as Marley, and he is an iconic figure in the history of African protest music. Without Fela Kuti it is hard to imagine the growth of independent African music in the ’80s and the strident political voices that have followed in his wake, unafraid to challenge the strict conventions that continue to dominate Africa’s political and social worlds.

Not least among these new breed of musicians are Kuti’s sons Femi Kuti and Seun Kuti. Femi, the eldest son, is now a star in his own right and has stayed true to his father’s Afrobeat style and highly politicized worldview. Barring the odd diversion into hip-hop (a route most modern African musicians go down at some point in their careers), Femi has gone from strength to strength and his latest album (2008’s Day By Day) is one of his best.

Seun, the youngest son, followed his elder brother into Fela’s Egypt 80 band in the 1980s. He has taken his time to make his solo bow, but 2007’s Many Things is a terrific album that was recorded with Egypt 80. In fact, Seun is maybe more of a chip off the old block than Femi, favouring a rougher vocal delivery and looser musical vibe and channelling the spirit of his late father on such tracks as Don’t Give That Shit To Me.

So, what relevance does Fela Kuti have in our current musical climate? Ask any good musician and you will find the answers. Or just listen to an electronica, hip-hop or funk album from the last few years and hear elements of his infectious Afrobeat groove writ large. Even dear old indie has been in on the game recently, with the likes of Vampire Weekend demonstrating a close affinity with great ’70s albums such as Gentleman, Expensive Shit and Zombie.

Perhaps more pertinent is the fact that Fela’s passionate defence of the rights of the ordinary people rings truer and truer every day. The chicanery and deceit that has been exposed in the political and financial world over the last year bears uncanny similarities to Fela’s exposé of African corruption in the ’70s and ’80s. Let’s leave the last word to the man himself: “Them go dey cause confusion/Cause corruption/Cause oppression/Cause inflation”.