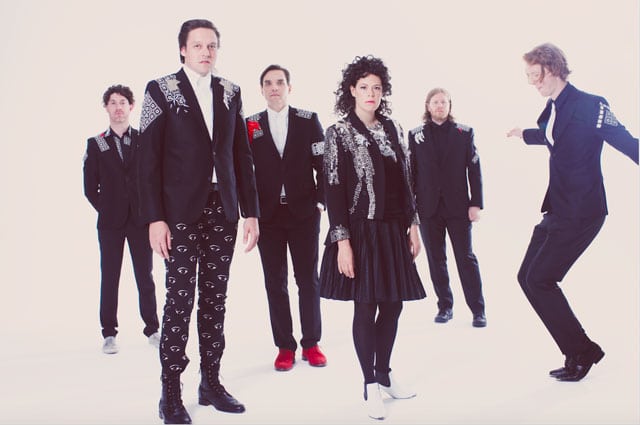 Khalid Joseph’s reputation as an emerging talent has grown steadily over the last few years, especially with a Special Jury Award for Short Film prize at the 2012 Sundance Film Festival under his belt thanks to his short film for Flying Lotus‘ Until The Quiet Comes. Arcade Fire have won so many awards that people stopped counting the accolades quite some time ago.

The Reflektor Tapes, a collaboration between these two artistic entities, on paper would seem to suggest a balancing act of mainstream sensibilities and artistic experimentation. The truth is that it leans heavily towards the latter of those two poles, and even die-hard fans may find this quite hard going.

The Reflektor Tapes is – of course – all about the Reflektor period of Arcade Fire’s career, a snapshot between 2012 to 2014. Joseph manages to capture some of the atmosphere in Haiti, particularly around the time of Carnival, the euphoria of the band’s shows in Montreal, Los Angeles and London; the latter of those shows, shot at Earls Court in June 2014, is beautifully shot and up there with Shut Up And Play The Hits in terms of footage quality. There is a lot of bouncing around from location to location, without a care in the world as to whether or not the viewer will catch up, and the film’s technical flourishes (inventive sound mixing, unconventional camera work, the constant alternation between monochrome and glorious technicolour) are bold and striking.

The main problem with The Reflektor Tapes is that, underneath all the disorientation and the dream-like nature of the imagery, there isn’t a lot of substance to be found. It comes across as a cinematic equivalent of The Beatles‘ Revolution 9 – an avant-garde and impressionistic collage of different textures, sounds and atmospheres with no sense of cohesion attached to it. Instead, the focus is on different ways of presenting the Canadian outfit and various aesthetics.

As such, there are passages where Joseph’s style is so heavily stamped that it takes away rather too much from the subject matter. When the live concert footage appears for seconds at a time, particularly from Earls Court, there is a jolt of energy that disappears almost as soon as it appears. It makes for a viewing experience that is, at times, immensely frustrating.

There is narrative, though it is fleeting. A quote from Kierkegaard’s essay The Present Age, which influenced a major part of the album’s beating heart, is displayed but not explored. Snippets of conversations with Win Butler about his relationship with Régine Chassagne and what it’s like to be in love are overheard but not elaborated on. Chassagne summarises her Haitian roots, but it is merely a summary.

So many of these topics could form the basis of an essential rock documentary – shedding new light on a band that has, despite their worldwide popularity, kept some of their mystery and allure intact. Instead, this is a mere peek at the inner workings rather than a full overview. And while this might be what they wanted to begin with, either way, The Reflektor Tapes is an abstract work that misses the mark.