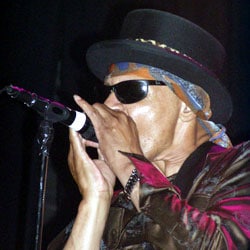 Arthur Lee, lead singer of the band Love, died peacefully in his sleep in Memphis on the afternoon of 3rd August, 2006 from complications arising from leukaemia. He was 61.

He leaves a wife of three decades, Diane, and in the three albums Love, Da Capo and Forever Changes, one of the most influential back catalogues in musical history.

Forever Changes reached the giddy heights of 152 in the US charts on its original release, shortly before the summer of love, and though it did rather better in the UK – peaking at number 24 – the band’s greatest moment also marked the beginning of their demise. Key member Bryan MacLean left in the following January, and subsequent albums never again reached the standards set by a record that was set to become a classic.

By the early ’80s, Love should have been a half-forgotten memory but again and again, the name of the band, and references to Forever Changes in particular, would turn up in interviews with so many of the musicians who meant something to me – cited as an influence, a favourite, an album everyone should listen to – that I couldn’t ignore them. As I expanded my tastes past the charts and Smash Hits, Love were one of the bands I looked to first. I found a second-hand copy of Forever Changes on a second hand record stall and before long they were my favourites. Them and the Velvet Underground. I could never choose between them and I won’t attempt to now. West Coast sunshine and East Coast darkness, the perfect yin and yang.

They were a band I should never have been lucky enough to see. They belonged to another era, defunct before I was born, but fate and time and whatever great powers are out there contrived to ensure I saw them not once but six times. They never once disappointed.

The first time was at Glastonbury, 2003. It wasn’t really Love, of course, it was Arthur Lee and some session musicians he’d brought together to tour Forever Changes, which had been reissued on CD in 2001 with additional tracks – but all the same, it was a wonderful, glorious, outdoor Don’t Look Back half a decade before anyone else thought of doing it.

Glastonbury was perfect for Love. It was a beautiful day, the sun starting to set as they began, the first chords of West Coast psychedelia washing over the loved-up Glastonbury fields. They followed a Doherty-less Libertines on the Other Stage and replaced the disappointment and vitriol of a band who knew their days were numbered with the glorious cocksurity of one whose place was burned indelibly into history. As if on cue, the sun sank behind the horizon at the exact moment the lyrics of The Daily Planet hit the line ‘Waiting for the Sun’, throwing a last warm, blinding glow across our outstretched arms.

The following year, they played the Acoustic Bands Tent, smaller and more intimate. Afterwards, Arthur Lee’s car drove past, window down, crawling through the crowd. I thrust my hand inside and burbled something incoherent. “I’ve got all your albums,” probably, or “I love you!” I really don’t remember, but I remember that he smiled graciously and squeezed hard, thanking me for my comments.

I saw him perform again at The Royal Festival Hall, All Tomorrow’s Parties and Shepherd’s Bush Empire. The last time I would see him was at The Rocket, a north London Student Union venue at what turned out to be a bizarre 1960s convention, populated by students in mod fancy dress and the odd bemused middle-aged muso who’d wandered in by mistake. Supported by a sub-Stooges student garage band, a fake hippy and The Actionettes – a mod formation dance troop who mimed to Northern Soul tunes – Arthur was majestic, seemingly oblivious to the absurdity of the event, performing Forever Changes as perfectly as ever.

With Arthur that night was Johnny Echols, former guitarist with the original Love. Not long afterwards, Arthur Lee and the band parted company; from now on they would (will?) tour as Johnny Echols’ Love. It was a brief, golden period I had never expected to have and for which I will be forever grateful.

Arthur Lee wasn’t perfect. It would be a disservice to try to gloss over or ignore the less savoury side of his character and paint him as a saint. He spent time in prison for gun offences, he was difficult and not always reliable, often blaming his band’s lack of commercial success on racism where others pointed at the impossibility of working with him; he was allegedly so abusive to his backing band Baby Lemonade while they were promoting the Love tribute album We’re All Normal and We Want Our Freedom in 1994 that they temporarily resigned. But he made plenty of friends, too. Alan McGee flew him over to the UK to play Creation records’ 10th anniversary party at the Albert Hall in 1994 and as his health deteriorated, Page & Plant staged tribute concerts to raise money.

Yesterday, at virtually the exact moment Arthur Lee was slipping away from this world, I was choosing just eight tracks for a stupid game of Desert Island Discs on the musicOMH forums. Two were Love songs – Alone Again Or and Old Man. If I could only listen to eight songs ever again, a quarter of them would feature Arthur Lee. That’s not a bad way to remember him.