Track-By-Track: Autoheart – I Can Build A Fire 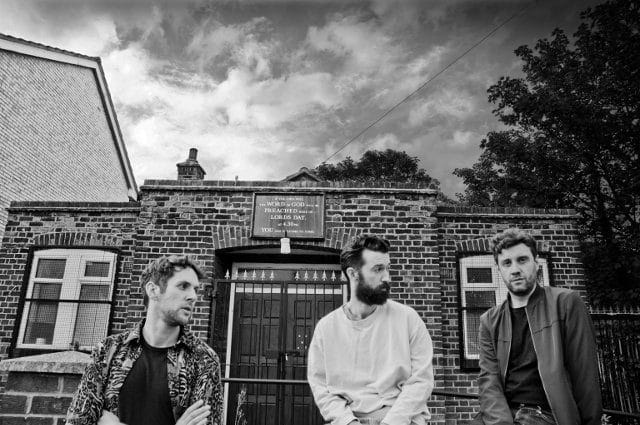 The splendid Autoheart, comprising Jody Gadsden (voice), Simon Neilson (keys) and Barney JC (guitars), return after far too long away with their second album I Can Build A Fire on 26 August.

“We were hoping for Giorgio Moroder meets John Carpenter but it’s probably more Erasure meets ABBA via Limahl’s The NeverEnding Story, which is basically the best song released during the ’80s,” say the trio, whose last album Punch featured the sublime The Sailor Song.

Built around the almost title track We Can Build A Fire – which, they say, nods lyrically to Kylie Minogue’s debut hit I Should Be So Lucky – the new album has seen them collaborate with Berlin-based singer-songwriter Anne Haight, and gender activist and model Rain Dove, who stars in the video for the current single Oxford Blood.

Ahead of the album’s release we asked Jody, Simon and Barney to guide us through the new album in their own words, and here they are.

Simon: The first song on the album but the last one written – for me, bookends should be striking and we wanted to have a track that showed off Jody’s knack for a line that hits you right in the feels – this was it. He actually had it on his songwriting dictaphone for months earlier but had oddly kept it a secret. It was the easiest song for us to produce, everything just fell into place – the Moroder bass, the Educating Rita style keys.

Barney: Credit too for Anne Haight – her vocal is magical. Sometimes backing vocals are more like an instrument, just a layer, but she sounds so human and fragile, and Jody sounds so sure. It’s a great pairing.

LOVE IS THE CURE

Barney: There’s something about Jody’s deadpan delivery that reminds me of Jona Lewie’s You Will Always Find Me In The Kitchen At Parties – although he’s from Southampton not Essex. Maybe that’s our genre: kitchen sink synth. Then it turns into Sparks for the middle eight. It’s lyrically very paired down for us. I’m not sure if I can think of another track we do where the chorus is just one phrase repeated over and over.

Jody: We planted the seed for Possibility while recording our first album ‘Punch’ when we had some downtime in between recording takes. We knew it would heavily influence the direction we took with the album.

Simon: It was always a big song for us and the chord riff/drums really evoked the ’80s with songs like Africa by Toto and Caroline by Fleetwood Mac. We wanted to avoid making it too pastiche so we gave it a modern disco twist and pushed the length to give it the feel of a dance record that evolves and climaxes.

Simon: Rip was a track that came together very early on and we played it at a couple of gigs when touring Punch to test the reaction. It’s our Yazoo by way of Blade Runner homage, using Juno synths for full Vangelis sound-scape “replicant” effect. We wanted to play about with electronics and phasing, recording layers of synth lines that play against each other. Jody’s vocal was the final soaring cherry on top. It’s a strangely uplifting song.

Barney: I liked it when you called it a space opera. I think I’d say space soap opera. I think it’s got a down-to-earth-ness about it, despite the soundscape soundtrack vibe.

Simon: Sylvia is probably the most fun song we have ever written. It’s all positive, positive, smiles and handstands from start to finish. Production wise we were listening to bands like The Belle Stars and Friends, working in ’80s LinnDrum samples and Mellotron flutes for the instrumental hooks.

Barney: The characters in this song sound like a hot mess. I love the words ‘blood, sweat, tears, that is all you need to be free’. It gloriously sums up getting drunk and not caring at all what you’re doing or where you end up. It’s not always pretty, but it’s cathartic. That’s why we do it. Who is Sylvia? Only Jody knows.

WE CAN BUILD A FIRE

Jody: The title track of the album is another track we wrote very early on. It started its life as a more acoustic affair with big drums and Barney weaving in different guitars. We wanted to produce an album that threaded live with electronica so it was important that it retained its roots but did not feel like the odd track out.

Simon: It is probably our most layered and experimental track to date and the mix was almost crushed under the weight so it took some time to balance it. Jody’s message is clear – “believe in what I say…but what I say might not be the truth…so don’t blame me after”. It’s a very current message.

Simon: Before You Came is the longest track on the album and probably the most personal for Jody lyrically. It’s kind of a slow jam, kind of a ’80s prom dance. As with all our tracks we demoed the vocals early on and lots of the those takes were used to create weird vocal tics and effects. We also wanted to try out a vocoder effect on Jody’s voice, just once, this track gave us the excuse to. The Saxophone and one minute intro to the song came last, so altogether that’s about six wonderful minutes of slow jam.

Barney: To me, this is all about that moment the beat drops in and it’s completely not what you expected. It’s like your favourite Cyndi Lauper song that she never made. I totally get Simon’s ’80s prom dance reference – there’s something nostalgic about it.

Jody: This is the one song on the album that I specifically wrote for my boyfriend, Matt. I emailed it to him on Christmas day and he promptly poured himself another glass of wine and put his headphones in to listen to it. Afterwards he said it was very, very good and I swear there was a tiny tear drop forming in one of his eyes but I was rather merry by this point so I can’t entirely recall. This is definitely my favourite track off the album for that very reason.

Simon: This track that came together in a random 10 minutes of free playing. I still have the original rehearsal recording and the song remained pretty much untouched. The drums and bass are a bit Ashes To Ashes and the rest just followed from there. I think every band must have a song that is slightly inspired by Bowie. The lyrics are quite dark and they tune into the some of the more current issues affecting gay men – drugs, sex, mental health, loneliness.

Barney: The guitar line is a riff I had forever and never knew what to do with. I’d play it in soundcheck and Simon started playing along one day. I’m glad it found a home.

Jody: This was originally a piano ballad and it took a while to find its feet; the melody was always strong so it could have been carried many ways. It’s one of our favourites on the album as it grows and builds with this brooding defiant sentiment. For me it’s all about the backing vocals, low monkish vocal drones, and the post middle eight section where it breaks down and the piano drives it to the end.

Barney: After it was a piano thing, it was a blues guitar thing which didn’t work either. But the spooky slide made it in the end. Like Murky, it’s a bit of a musical magpie.

Simon: This was probably the hardest track to finish, we tried out a few songs for the final spot and it almost didn’t make the cut. Having produced three different versions of the track, none really felt satisfying. I was song-writing in Berlin with Anne Haight and we decided to try it as a duet. It transformed into this beautiful sad love story and breathed new life into it. We ended up producing a kind of Frankenstein’s monster patchwork of all three versions which builds into a huge duel between the Juno and Barney’s guitar solo. It’s probably my favourite track on the album and the epic ABBA-esque closing instrumental gives a perfect haunting end to I Can Build A Fire.

Barney: Oh my god, we had so much hair pulling with this one. If one of us was happy with it, another wasn’t. I not-so-secretly hoped it would get dropped but Simon had faith in making it work and hats off to him for digging his heels in. Now I really quite like it for starting out quite tasteful and ending up in total camp-land. More is more!

Autoheart’s new album I Can Build A Fire is out through O/R Records on 26 August 2016. Tour dates and further information can be found here.