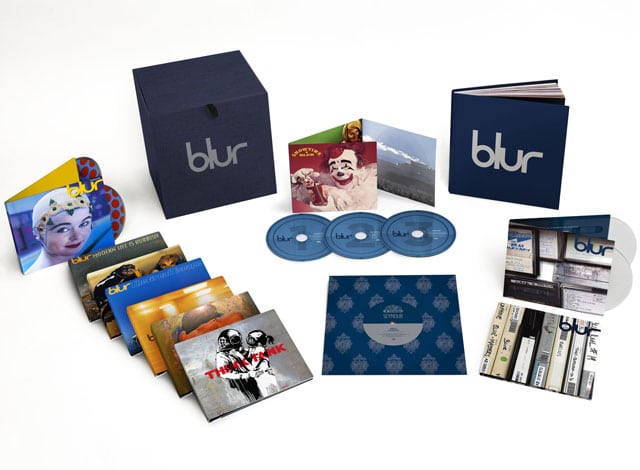 Call it a baby sonic boom. For the hordes of Blur megafans taking delivery this week of the mammoth retrospective 21 box set, it will be akin to coming home from hospital with your newborn child. It weighs about as much. And it’s got its best outfit on – a handsome little number of blue cloth with a silver embossed logo.

And as you set it gently on the shelf, think of Damon Albarn‘s lethargic line from frazzled late-night tune Death Of A Party. Because there will sit the entire boom, vroom and bust of one of British rock’s most revered and confounding acts of the last two decades. In fact, the benefit of hindsight offered on 21 is, erm, 20-20; it shows the band having a rather Radiohead-esque start and progression, from twee popsters to sonic oddballs.

With a huge Olympics gig in Hyde Park set to come on 12 August and the band recently releasing one of their strongest songs in years with the nostalgic Under The Westway, it’s strange timing for this career-defining box set. But it’s a strong hint that this is the end. Out Of Time, as the Think Tank song goes.

In 21 years Albarn, Graham Coxon, Alex James and Dave Rowntree transformed themselves from a no-hope Essex pub band called Seymour to a group who redefined British pop music and helped to change global perceptions of Britain. Along the way there’s been some cracking up, rocking out, falling out, drying out and splitting up. Now cosmetically reformed, its impossible to think of them as the same band, especially with the multitude of Gorillazs, Monkeys and Dr Dees milling around taking Albarn in different directions, and Coxon’s eight solo albums. So, if this is the curtain call for Blur, here are 21 things about the band you might care to know before purchasing 18 CDs, 3 DVDs and a 7 that sit rather snugly within the exhausting wall-to-wall Blur bonanza that is 21. Start counting now…

1. Fucking hell, there are very few Blur songs that contain an expletive. The most notable being the hidden track on Think Tank called Me, White Noise that earned it the Parental Advisory logo on the front cover. Phil Daniels (Jimmy Cooper from film Quadrophenia, or better known more recently as Kevin Wicks in Eastenders) says fuck off, just so you know. What a charming man.

2. Damon Albarn’s interest in Ye Olde English isn’t a recent Dr Dee-related discovery. The band’s most sought after piece of vinyl a free 7″ given away at The Hibernian Club in Fulham at a December 1992 gig that apparently trades hands for hundreds of pounds is titled The Wassailing Song, named after the festive practice of singing Christmas carols door to door.

3. Seymour signed to Food Records and changed their name to Blur in 1990. Some of the songs on Leisure date from their earlier incarnation. This includes the 11-minute-plus rehearsal take of She’s So High contained on the first disc of rarities.

4. Speaking of rarities, the box set contains more than five-and-a-half hours of previously unreleased material. This represents roughly half the running time of the band’s entire output of albums. So get comfy.

5. One of the most startlingly beautiful and affecting songs in the treasure trove is the original full-length version of The Woodpigeon Song, recorded at the now defunct Townhouse Studios in Goldhawk Road, Shepherd’s Bush, by Stephen Street.

6. Long-time Blur producer Stephen Street has unearthed some entertaining footage of the band in the studio during the Parklife sessions. Check out Damon bopping about at www.stephenstreet.net

7. The first appearance of Blur on Top Of The Pops followed Vic Reeves singing Born Free. As Vic took the stage, Albarn recounts in the 21 book that his ecstasy tablet kicked in. This is a good place to be, he remembers thinking. Blur followed with There’s No Other Way as they made their first-ever UK TV appearance.

8. The number of clowns on the front of the three-disc DVD package of live gigs and videos? Two.

9. Song 1992 from album 13 was originally recorded as a demo in 1992 and was included after Albarn found it on a tape six years later. The original demo is sadly not included in the boxset.

10. Want proof the band were big fans of Dinosaur Jr? Look no further than the no-holds-barred fuzzed-out guitar riff on the demo version of Never Clever, released on Food Records compilation Food 100 in 1997.

11. Hes so high art. Julian Opie the artist who painted the portraits of the Blur boys used on the cover of Blur: Best Of also lent paintings to fellow London band Saint Etienne for use as cover art. The Blur portraits hang in the National Portrait Gallery.

12. Blur kicked off their first American tour on the day Nirvana released album Nevermind. We were surplus to requirements, recalls Albarn. It was spectacularly ill-timed.”

13. Far-out bass player and producer Bill Laswell recorded two bizarre songs for Blur in Sarm Studios in 2000. Titled simply 1 and 3, the former shows off a remarkably Nirvana-esque vocal line from Albarn, while the latter hints to the funky side of Gorillaz.

14. Five years after their first rehearsal, the release of Parklife marked the first of five consecutive Number 1 albums for the band. And it’s Phil Daniels (see No. 1) who stars on the title track of the 1994 album.

15. Marianne Faithfull recorded a tune called Kissin Time, written by Albarn. It was released on the 16th album by the British crooner, which also features a song written by Pulp‘s Jarvis Cocker.

16. Blur a disco band? Coxon says yes. He points to Girls And Boys. Thats a disco beat. And fair enough, the Pet Shop Boys remixed it for a 12″.

17. Thank the Tories? Apart from the passing Albarn side project, the box set’s hardback book doesn’t make much mention any of other pastimes from other band members. However, perhaps fans should thank the Conservative voters of the Church Street ward in Westminster for their landslide win over drummer and Labour candidate Dave Rowntree in the 2007 local elections. It was the first time the ward had ever been won by a Tory. Oh, and Alex makes cheese.

18. Fan club members will recall August 1996. It marked the release of early demo version of Death Of A Party, with the now legendary guitar riff being played by Coxon on an acoustic guitar. Despite having little in common with the instrumentation of the track that appeared on their self-titled 1997 album (no drums, a two-voice chorus and a minimal synth line) it is instantly recognisable and eerily effective.

19. Blur have long admitted their love of the Pixies. And if you want to hear a musical influence, listen to the warbling, stripped-down guitar line that kicks off the demo version of Pressure On Julian from Modern Life Is Rubbish.

20. It’s clear from the recollections of the band that they were riding by the seat of their pants from the minute go. And in the handsome book, the equally handsome Alex James admits just how little foresight the band possessed when he says: “I didnt think Song 2 was a single.”

21. One of the more curious songs on the box set comes from the Think Tank sessions. Its named after Sir Elton John‘s Cock, apparently. And, at only 84 seconds, it’s quite short.

Blur’s 21 box set is out now through Parlophone. Blur play at London’s 100 Club on 2 August 2012 and headline the Olympics closing concert in Hyde Park on 12 August 2012.