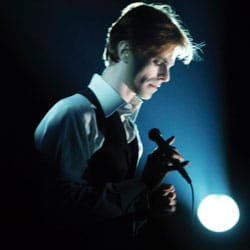 It opens with faint birdsong and the distant chugging of a train. Someone is running from something bad, running towards something that might be even worse. The chugging gets louder and begins phasing and distorting, bleeding into feedback from an electric guitar and a doomy, plodding Weill-Brecht piano.

As David Bowie starts crooning eerily about throwing darts in lovers’ eyes and ‘the return of the Thin White Duke’ we could be watching a GW Pabst melodrama from the silent age, or waiting on a freezing railway platform from one of Graham Greene or John le Carré‘s depictions of a fractured post-war Europe. In 1976 Bowie’s mind was very much preoccupied by this imagery. Having sucked the marrow from Los Angeles, and had his marrow sucked in return (so to speak…) he was a pale shadow, blitzed by his experiences of cynical Hollywood and looking to the vibrant art and music scenes of The Old World (particularly Germany) for inspiration. Station To Station, the album and the track, were his escape tunnel from the ‘Relentless Plastic Soul’ of Young Americans to the rarefied, austere robot-funk of his Berlin years, and traces of both musical approaches cling to this album like torn posters.

The sprawling, schizoid title track is a declaration of intent. The swooning, weary cynicism of the lugubrious first half suddenly switches up to pounding, breathless funk as the lyrics jump from obscure, vague allusions to Christ, Crowley and the Kabballah into a hymn to rejuvenation. “It’s too late to be hateful” he sings, sounding positively evangelical. “It’s not the side effects of the cocaine,” he insists, but the listener begs to differ: cocaine dusts every aspect of this album, from the propulsive rhythms and slick interplay of guitar drums and bass on its more upbeat moments to the frazzled, distracted ‘This Limo is great! Wait, are those cops following us?’ tone of the lyrics. Rarely has an artist seemed so brutally self-assured and so brutalised by self-doubt at the same time.

Golden Years offers us a neat precis of the album as a whole: the music is joyful, gorgeous mellow funk, the words a loving exhortation to get involved in life, to cherish youth and love and live for the moment. But it comes with the sharp reminder that to deserve this reward “You gotta get smart” and, chillingly, that one day you’re “gonna drive back down where you once belonged”. The heartfelt ballad Word On A Wing is Bowie’s attempt to write a literal prayer to God, a naked, unashamed call for spiritual guidance to help extricate him from the confusing mess of beliefs and habits he was succumbing to. The album’s second half gets off to a fine, surreal jump-start with the wryly funky and surreal TVC15, whose lyrics recall Bowie’s spectral, television-addicted Thomas Jerome Newton in the previous year’s The Man Who Fell To Earth (a still from which graces the album’s sleeve) as well as looking forward to David Cronenberg‘s Videodrome in its tale of a girl crawling into a TV set, never to be seen again. 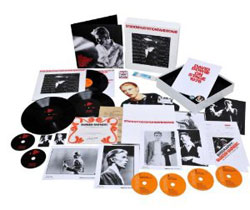 This relative light relief is short-lived, as Carlos Alomar‘s snappy funk guitar pulls the rug from under us once more at the into to Stay. Ostensibly another in that long, long, old-as-the-hills list of songs about horny blokes trying to coerce women into spending the night, it has a thread of existential paranoia and melancholy helplessness woven into it that is as unsettling as George Murray‘s thudding, stuttering bassline. There is something horrible and heartbreaking in the picture it paints of someone so ripped apart by desire and fatigued by the grind of life that he can barely articulate what he wants to the object of his lust. “You can never really tell when somebody wants something you want too” could be the key line of Bowie’s whole career, at once comically resigned and frighteningly lonely.

His cover of the Dmitri Tiomkin standard Wild Is The Wind (Nina Simone‘s version being a favourite of Bowie’s) ends the album and leaves us haunted by the picture of a man craving solace from a soul mate, tired of the endless hoops he has to jump through. It fits with the conception of The Thin White Duke (Bowie’s final ‘character’) as a Weimar Republic crooner out of his era, gasping ersatz emotion into the most tender torch songs even as his own heart shrivels to a lump of coal.

EMI’s Super Deluxe Box Set of the album is an imposing package befitting the album’s status as a cult classic, the reputation of which has grown so much that it is now widely held to be Bowie’s magnum opus. As well as all of the Space Cadet knick-knacks that weigh it down (posters, weighty vinyl, a booklet, replica tickets, backstage passes, &C.) it comes with two complete CD versions of Station To Station: one mastered from the original 1976 vinyl and one mastered from RCA’s 1985 CD reissue. Having studied both closely, it seems that the difference is fairly negligible. A warmer, very slightly woozier feel to the analogue version perhaps? It would seem that the only real qualitative difference will be detected by the consumer who routinely invests in 800 headphones or who’s house has a dedicated listening room with speakers placed and tweaked with architectural precision. Another bonus disc offers us the single mixes, including a never-before-released edit of the title track, which ill-advisedly skips the brooding, angsty opening and skips right to the pounding finale.

The real Holy Grail for the listener however is a double CD package of the much-bootlegged Nassau Coliseum show from the album’s promotional tour. The sound mix has been tweaked a little but an overall fuzziness betrays its origins as a radio show. Like most live albums it’s a hit-and-miss affair. Storming, positively evil live versions of Station To Station, Stay and TVC15 (as well as blistering takes on older material like Diamond Dogs, Suffragette City, Panic in Detroit &c.) are blighted by the occasional fiddly guitar solo and extended drum workout. Well, it was the pre-punk ’70s. Touching versions of Life On Mars and Five Years keep things balanced while a frazzled, too-fast take on the Velvet Underground‘s Waiting For the Man is great fun, especially since Bowie extemporises some dodgy, ‘Trust in yourself and you can do ANYTHING’ style self-help banter, which gets a hysterical cheer from the audience. It’s not the side effects of the cocaine…