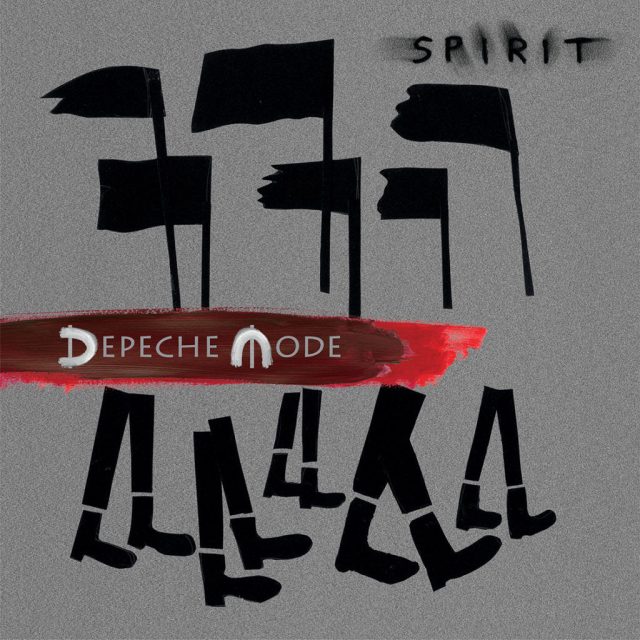 Dave Gahan, Martin Gore and Andy Fletcher return this spring with Depeche Mode‘s 14th album and second for Columbia, Spirit. Four years on from the chart-topping success of Delta Machine, the new work sprawls across 12 tracks that were produced by James Ford, aka half of Simian Mobile Disco, whose previous production credits include albums by Arctic Monkeys and Florence And The Machine.

At the album’s London playback on bespoke speakers at new Kings Cross bar Spiritland, Ford was on hand for introductions. He describes the “bleak, dystopian demos” presented to him, and points out that he’d never made albums with people who’d made more albums than he has. He hopes the finished work is a “bold, powerful, direct” album.

It’s certainly a politically engaged one, with serious attempts to tackle in broad brush strokes the politics of the age, even as every day they get stranger, but there’s space for relationship break-ups and even a lullaby of sorts too.

“We have opinions, we have not evolved, we have no respect, we have lost control, we’re going backwards,” mulls Gahan, quite the preacher of doom on an opener which sets the scene for a more than usually political record from the Basildon trio, and one which does not mince words. Over a backgrounding piano he asks, “Are you counting the casualties?” It’s a direct response to a news cycle that has rarely seemed wilder in these post-Brexit referendum, post-Trump election days.

The first track from the new album to break cover, Where’s The Revolution continues the political theme. “You’ve been kept down, pushed round, lied to, fed truths. Who’s making your decisions, you or your religion, your government, your country, you patriotic junkies. Where’s the revolution”. Spiky guitar and distorted backing vocals round out the insistent sound.

By now it’s clear that Ford’s production sheen doesn’t detract from the Mode’s sound, though Gahan is installed well within, rather than on top of, the mix for the most part. It’s also clear that politics remains to the fore on what’s transpiring to be their most political album yet. This slower piece mentions “misguided leaders” and “uneducated readers”. “For whatever reason we now find ourselves in this, we are all tried for treason… how could we commit the worst crime,” sings Gahan, quite the portent of doom. It’s not a track that immediately grabs, but its sincerity is not in doubt.

Gahan’s vocals (or is it Gore?) are distorted heavily here, making the lyrics difficult to hear, and while the tempo is hardly frenetic this does tilt towards the sort of dance music Ford mentioned. A lyrics sheet would be handy here.

Another inauspicious start that goes for mysterious but sounds like it’s not sure what it’s about. “We don’t have that life no more,” sings Gahan, articulating words that suggest the first of several tracks which sound as though they’re about a break-up.

One of the album’s better tracks, it recalls the slide guitars and atmospherics of Pink Floyd’s Breathe before giving way to a second half that’s much more intriguing, featuring synthy arpeggiations. The lack of vocals thereon marks this one out as space for a costume change in a live set, but the music holds its own.

Break-up is back on the agenda here, and so is a beat, albeit a mid-tempo one. It has a sense of the unfinished about it, with a bluesy guitar-led feel that aims a few tequilas on from Personal Jesus. “You have poison in your heart, you know we have to break up,” Gahan says.

This one’s a proper banger, with correspondingly proper synthy beaty urgency about it. “There is so much love in me,” implores Gahan, sounding like he’s singing an obvious single and crying out for attention on more than one level. It sports a classic singalong chorus, a classic song structure and lovely, lovely synths – and even a mic drop conclusion. Undoubtedly one of the album’s two best tracks.

Following the full throttle of the track before, this one eases back a little, and back to politics, with a plinky plonky piano opening underpinning gospel vocal harmonies, the sum augmented by stabby synths. “There’s no news, Still got the blues… Corporations get the breaks, keeping almost everything they make. Tell us how long it’s going to take, when will it trickle down.” It’s a curious theme to be warming to when you’re signed to a major label division of one of the planet’s largest entertainment companies, but there they stand. Is it directed at Sony, or at corporations more generally?

No More (This is the Last Time)

“Repeat the process, repeat the line, you go your way, I’ll go mine.” Here lies another entry in the break-up canon. “Reach the top, slowly fade away… Last time I say goodbye… You don’t mean a thing to me no more.” Harsh, but is it about more than the disintegration of a relationship between two people? Is this a parting of ways on a larger scale?

Gore takes lead vocals again, and his voice sounds here more baroque than ever, with an increasing distance between his output and that of Gahan. That a song called Fail ends the album scarcely leaves a sign pointing to positivity. Instead it underlines a sense of foreboding that runs right through this most serious of Depeche Mode albums.

Depeche Mode’s Spirit is released through Columbia on 17 March 2017, with an arena tour of Europe beginning in Stockholm on 5 May. Full tour dates and further information can be found here.