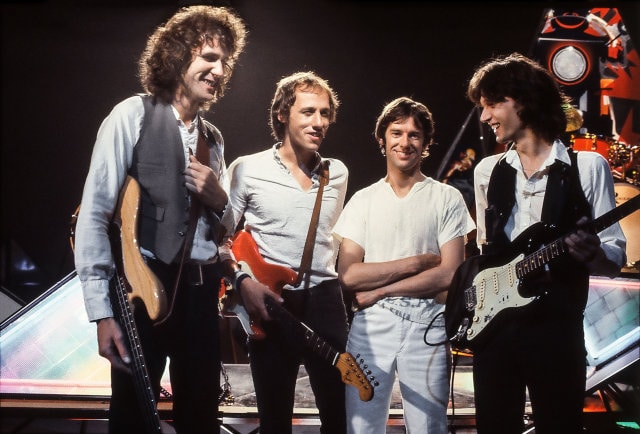 Dad rock, AOR, mainstream: all terms to strike fear into the heart of any self-respecting music fan who are more concerned with their street cred than anything else. Also, they’re all terms that can be applied to many successful artists over the years, with Queen perhaps the biggest name to suffer such scornful glances of contempt. Post-Peter Gabriel Genesis are another, together with his vocal replacement, drummer Phil Collins, when he embarked on a solo career that was kicked off with the really rather good Roland CR-78 rhythm machine-based In The Air Tonight from 1981. Dire Straits also suffered this disdainful snobbery but, like so many of their similarly dismissed peers, all they have to do in response is nonchalantly point their fingers in the direction of record sales, with the UK (measured by the BPI) and US market performances (see the RIAA) the go-to yardsticks when measuring success.

It all began for the soft-rock band led by Mark Knopfler back in 1977, the original line-up completed by brother David on rhythm guitar, John Illsley on bass and Pick Withers, a friend of whom named the band, on drums. Vertigo, a division of Phonogram Records, soon came calling and they were off. The eponymously titled debut hit the UK album charts in July 1978, climbing to Number 5 and subsequently doing even better in the United States. The band duly made the often tough transition to the American market look easy by peaking at Number 2 at the first time of asking. The debut was an album underpinned, or completely dominated if you prefer, by the classic-to-be Sultans Of Swing, a song named after an obscure band Knopfler had seen in a South London pub. If your exposure to this song is merely the single version continuously churned out by multiple radio stations to this day then go listen to it live, the most obvious touch point being Alchemy, Dire Straits’ live double album from 1984. Live versions of the song are really where its legacy lies, particularly towards their climax, the dexterity within Knopfler’s guitaring mindblowing. 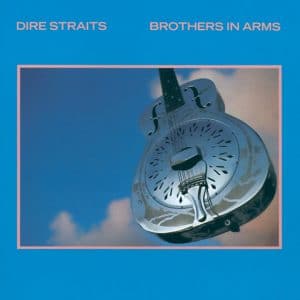 The success of the debut was a surprise; since around the mid-1970s, the power of punk was battering the industry like a rampant bull in the proverbial china shop, the snarling angst giving youth a voice in a grim Thatcherite Britain. Perhaps, then, this was an anti-punk fight back, with Dire Straits’ classic tones harking back to the early ’70s before punk attacked the senses, a recent past where guitar solos had come to the fore. Whatever the reason, the buying public have ensured Dire Straits the album was a success: UK sales = 0.6m+, US sales = 2m+, figures that demand respect.

Communique, recorded in the Bahamas, followed swiftly in 1979 due to label pressures, and stayed clear of tinkering with the Dire Straits formula. Whilst the album lacked a killer tune on the Sultans Of Swing scale, its opening track Once Upon A Time In The West, as well as side two opener Lady Writer, gave fans some decent fodder, despite their admittedly paler similarities to Down To The Waterline and, indeed, Sultans Of Swing. Again, the album reached Number 5 in the UK chart, faring less well but still impressively in America where it rose to Number 11, even if sales were disappointingly down versus the debut: UK sales = 0.3m+, US sales = 0.5m+. Yet most artists would still envy such unit shift.

Despite then taking some time off, history books will show that their prolificacy didn’t suffer as third album Making Movies appeared towards the end of 1980, after recording took place in New York at a time when punk was starting to wane. Instead, they were now competing against post-punk, music that focussed less on anger, more on glum resignation, and new wave which was also causing a stir as a multitude of bands jumped on the electronica bandwagon. But contemporary rock fans were still in abundance and stuck by their preferences, ensuring a hungry audience made Making Movies more of a success than Communique.

Knopfler’s storytelling had improved and the excellent Romeo And Juliet sent the band back into the UK Top 10 singles chart where they hadn’t been since Sultans Of Swing. Peaking at Number 4 in the UK and spending an incredible 250+ weeks on the chart, Making Movies became Dire Straits’ highest charting album to date but in the US, where the ‘g’ from the album title was removed, a Billboard chart position of 19 was recorded, the lowest of their albums so far. Sales, though, make for more impressive and envious reading once again: UK sales = 0.6m+, US sales = 1m+.

Things didn’t really slow up for the band at this point. Introduced by the epic and moody lead single Private Investigations, which soared to Number 2 in the UK singles chart, a position they equalled but never bettered, Love Over Gold arrived in September 1982. Telegraph Road, another epic that considerably eclipses anything else in their catalogue at over 14 minutes, opened the album, continuing the trend that had seen another classic Dire Straits track, Tunnel Of Love, open its predecessor and has earnt its place amongst their very best tracks. They’d threatened it before, but Love Over Gold became the band’s first chart topper in the UK; in the US, however, things were more subdued, again reaching 19. Sales were still impressive though, another finger in the eye of their detractors: UK sales = 0.6m+, US sales = 0.5m+.

After the successful release of Alchemy, studio album number five was to become legendary. Tracks became more accessible – shorter with greater commercial appeal – and it produced five UK Top 40 hits. Brothers In Arms was released in mid-1985 – preceded by its first hit and also opening track So Far Away – shooting its way to the top of the charts on both sides of the Atlantic. What gave the album sparkle, though, was the Neve console used for recording, supposedly a major step forward in the digital revolution that threatened to completely end the older analogue way of recording music. Even now, when seeking out your oldest CD’s, you may find the inside cover of the CD booklet bearing details about the new all-conquering format. Look closer and you may see mention of the three standard recording formats: AAD, ADD and DDD, indicating at which stage analogue and digital equipment had been used, with DDD the supposed holy grail of any recording as it was entirely digital which was assumed to be as good as it got. And Brothers In Arms was one of the very first to come out as DDD.

Sessions for the album had taken a dive in Montserrat as the experience became more holiday, less work, and it wasn’t until a new drummer – New Yorker Omar Hakim who had been working with Sting – was brought in that impetus was restored. Sting himself then stepped into the fray, recording his vocal line “I want my MTV” to the tune of The Police’s own Don’t Stand So Close To Me chorus for the next single Money For Nothing. The song became a monster hit, reaching the Top 5 in the UK whilst topping the Billboard chart, a track given a tangible helping hand by a legendary music video that – laughably when looked at retrospectively – was revolutionary for the time, with unforgettable computer generated cartoon characters emblazoned across TV screens as the MTV phenomenon which had been launched in 1981 progressed into Europe as MTV Europe took off in 1985, with Money For Nothing going into the history books as being the first video shown on the new spin-off channel.

The title track was the next single to be released and, despite modest chart performances, is often quoted as being the band’s best ever song, topping even Sultans Of Swing for many, as Knopfler’s 1982 penned song about the Falklands War came to fruition three years later. Walk Of Life then became the only other Dire Straits track to reach Number 2 in the UK after Private Investigations almost four years earlier, before Your Latest Trick completed the UK singles quintet.

During the 1980s an album spawning five singles was rare, but considering the original release had just nine tracks, the rate of conversion to singles contributed significantly to the album’s legacy. Even now, some 35 years after its release, Brothers In Arms sits proudly in history and is recognised as being the eighth best selling album of all time in the UK, posting jaw-dropping figures and outselling such huge sellers as Michael Jackson’s Bad, Fleetwood Mac’s Rumours and Meat Loaf’s Bat Out Of Hell: UK sales = 4.3m+, US sales = 9m+.

Whilst Brothers In Arms could never be matched, their final studio album was by no means a flop either. On Every Street, released in 1991 following various band member detours, topped the UK chart again and reached 12 in the US: UK sales = 0.6m+, US sales = 1m+.

So, before you tut annoyingly at the sound of Sultans Of Swing popping into earshot on your radio station of choice, don’t dismiss the band as being something contemptuous; Dire Straits may well be an example of mainstream AOR that recall memories of your dad’s preferred listening habits, but their place at the table is more than deserved.