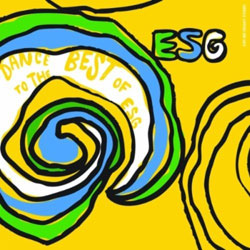 There are many well-known tales of events which changed the course of musical history: Robert Johnson selling his soul at the crossroads; Bob Dylan going electric at the Newport Folk Festival; and so on. But somehow the story of Mrs Scroggins and her four wayward daughters has been lost to us.

Rumour has it that, somewhere in the late ’70s, the Bronx-based sisters were starting to show a worrying interest in boys, and in order to provide them with a diverting pastime and thus avert teenage pregnancy, their concerned mother shelled out a few bucks on primitive musical instruments for the girls. And, in doing so, she inadvertently created one of the most influential – and yet still almost unknown – bands in history.

ESG – Valerie, Renee, Marie, and Deborah to their mother – only gave the world a couple of EPs and one notable album, yet their influence is everywhere. Their sound is defined by their limited vocal skills and the rag-tag selection of instruments their mother bestowed on them – bass guitar, drums, congas, all manner of dime-store percussion instruments. And yet, as so often happens in creative endeavours, these limitations proved to be a huge advantage in defining their unique qualities. Where the ’70s were dominated by guitars and the ’80s by keyboards, ESG released their first EP at the turn of the decade and were refreshingly dominated by neither.

The result is an eerie, hollow sound, weirdly offset by a crisp, tight icy funk. It’s joyfully danceable and resolutely gloomy at the same time. With the traditional guitar-vocal-keyboards focus shifted to the sidelines, ESG’s music is all about mood, texture and atmosphere. Yet, coming as it does from untrained, intuitive non-musicians, there’s nothing self-consciously arty about it whatever.

Their early ’80s output consists of only a dozen or so songs, yet each one sounds like a template for a new and different genre. UFO, a lop-sided, percussion-led instrumental, is apparently one of the most sampled records in hip-hop, as well as lending effortless New York cool to trainer ads. Moody, with its gut-churning bassline, minimalist percussion, and sparse vocals is a dead ringer for the hollow, wasted sound of Factory Records’ early-’80s roster, the newly-born New Order included. Incidentally, Tony Wilson was so impressed upon hearing ESG that he roped in Martin Hannett to produce their first EP – and had them play at the opening night of the Hacienda.

There’s a direct, as-the-crow-flies line between Parking Lot Blues and Talk It and the scribbly guitars, deep bass, and sinister emptiness of Public Image Limited, a band that ESG used to share stages with in the late ’70s. Chistelle’s spaced-out steel guitar and polyrhythmic percussion can be heard in the post-rock movement and much of Warp Records’ output. Hold Me Right lends its dubby bassline, twinkling guitar embellishment, and synthesised violins to the Happy Mondays and the Madchester sound. And the brash, girly sass of Dance can be heard in Salt-n-Pepa‘s Push It and a legion of girl hip-hoppers from thereon.

Many of the most up-to-the-minute artists owe a debt to ESG too: for instance, it’s hard to imagine LCD Soundsystem‘s metronomic bass drive and cowbell-clattering percussion without the Scroggins sisters.

No-one could criticise Fire Records for releasing Dance To The Best Of ESG: it’s clearly time for these unsung heroines to get the credit they deserve. And the compilation contains everything from them that you’d ever want to hear: everything mentioned above, plus the very limited highlights from their patchier 1991, 2002 and 2006 albums. Soul Jazz Records released a one-disc compilation, A South Bronx Story, in 2000 which did exactly that. Trouble is, this one gives you a lot more – which is a lot more than you need.

Dance To The Best Of ESG is a two-disc retrospective of a band whose concentrated brilliance only really lends itself to a single disc. It draws heavily upon the later albums, yielding tracks which are far more influenced than influencing, and at times sound too slushy or simply too slick. Remixes abound too: no-one really needs four versions of Moody, however great the original is.

We’re left that curious thing: a record for completists of an almost-unknown band. While it’s a release which would have benefited hugely from some serious editing, in principle it’s a much-needed and overdue one.