It seems strange that a piece of art as timeless as All Things Must Pass has an anniversary, but here we are, acknowledging the 50th anniversary edition of one of the greatest artworks – in any medium – of all time 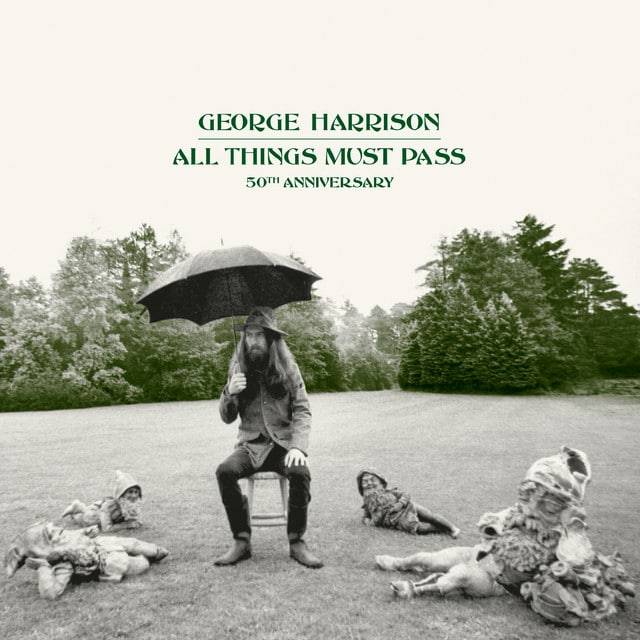 First released in November 1970, All Things Must Pass is George Harrison’s delicate, glorious soul laid bare and spread liberally across six sides of vinyl, featuring songs intended for The Beatles, songs that celebrate the beliefs and mysticism of the Hindu faith, songs that mean nothing and songs that just seem to hold the entire universe within them. Featuring the spiritual confluence of three pop legends – Bob Dylan, Phil Spector and Harrison himself – and the transcendent sounds of a band that includes Klaus Voorman, Ringo Starr, Billy Preston, Bobby Keys, Jim Gordon and Eric Clapton among many, many others, All Things Must Pass succeeds because it manages to perfect the maximalist approach, as Pet Sounds and Forever Changes and Days Of Future Passed did before it.

From the lush, luxuriant sounds of the Dylan co-write I’d Have You Anytime – written with Dylan at his Bearsville home in upstate New York – to the Apple Jams that make up sides five and six of the original record, Harrison takes listeners on a tour of the entire history of Western popular music up until that point. Throughout the album, there are accents and motifs drawn from blues, jazz, rock, folk and country styles – and in Art Of Dying, something that hints at disco through its particularly odd strain of mutant funk.

As Harrison’s entire early catalogue (pre-Dark Horse years) was reissued as recently as 2014, you would be forgiven for wondering why there was a need for yet another reissue of All Things Must Pass, but here are the details of the reissue for you to make your own mind up about:

“The reissue is available in seven varieties, from Standard vinyl and CD editions up to an Uber Deluxe Edition box set. The most extensive editions contain 70 tracks across 5 CDs/8LPs, including outtakes, jams and 47 demos, 42 of which are previously unreleased, and a scrapbook containing archival notes and track-by-track annotation curated by Olivia Harrison. The Uber Deluxe set adds a 44-page book on the creation of the 1970 triple album, along with scale replica figurines of Harrison and the Friar Park gnomes, an illustration by Voormann, and Paramahansa Yogananda’s text “Light from the Great Ones”, among other extras.”

As it turns out, the original is still the best, but many of these extras are highly desirable. The wealth of unreleased material available on the more expensive editions is staggering, but not unexpected owing to the sheer length of the original album (an hour and 45 minutes), and the divine inspiration (literally and figuratively) blowing through George’s sails at this point in time. The already-released Run Of The Mill (Take 36) is delightful. Other extras, like the different takes of Isn’t It A Pity, and the whole disc of ‘Day One’ demos, help to fill in gaps that you didn’t know existed. Lots of the extra material has sprung up on bootlegs (including a very popular bootleg from this era that shall remain nameless) – but the wealth of new and updated music here is fantastic.

These newly released pieces, especially the early demos, may be reason enough to shell out the extra money on these packages, which leads us to the main issue with reissues like this: If there was to be a criticism of this suite of reissues – and there must, because the most expensive item costs the better part of a thousand pounds – then it must be that there is still archival material in the vaults somewhere waiting to be released. If, as has happened with The Stooges’ Fun House sessions, the entire recording sessions for the album were to be pressed onto vinyl and CD, then the extravagant price tag might be worth it.

As it is, this kind of commercialism runs in complete antithesis to the central message of the album, and indeed the entire Hare Krishna movement with which Harrison identified. On the other hand, this is many, many peoples’ favourite album ever, and they may simply wish to give themselves an extravagant treat after such a woeful couple of years. Our advice? Buy the most expensive version you can comfortably afford if you know it will be worth it for you, or buy a basic edition and donate the rest of the money to a good cause. We’re sure George wouldn’t mind either way.

George Harrison’s All Things Must Pass 50th Anniversary is out now through Capitol/UMe. Track listings and further details can be found at georgeharrison.com