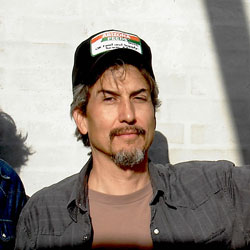 Giant Sand, or more precisely Howe Gelb, is one of those artists who should have delivered more than what was initially promised. Twenty-five years ago, Valley Of Rain was released to critical acclaim, with many predicting that Gelb would become the new generation’s Neil Young. And just as Mr Young had been dubbed the “godfather of grunge”, many over time have since bestowed Gelb with the title of “godfather of alt.country”.

So many American bands that have risen to prominence over the last decade or so have achieved this by following in the dusty footsteps of Giant Sand. Iron And Wine and Bon Iver‘s lo-fi acoustic balladry, Band Of Horses and My Morning Jacket‘s Southern country rock-outs, Lambchop and Okkervil River‘s surreal baroque beauty. All these bands descend from that rainy valley were Giant Sand were born.

For a band so influential, it’s amazing that Giant Sand aren’t constantly touring stadiums, being carted across the globe like some old museum relic displayed behind glass for millions to come and marvel at its history. The truth is that you’re more likely to find them playing local bars these days.

Nor is Giant Sand about preserving the past. Similar to Mark E Smith and The Fall, Giant Sand usually involves a forever changing band line-up revolving around the ubiquitous presence of Gelb. Fans of Calexico may be aware that principal duo Joey Burns and John Convertino were once in Giant Sand but acrimoniously split from Gelb and the rest of the band. In 2004, as Calexico’s reputation was growing and Giant Sand’s was flat lining, Gelb claimed that Burns and Convertino “began to work against Giant Sand and eat away at what the band was”.

This exchange eternally reinforced the vision of Gelb as an awkward, jealous character, yet it hasn’t stopped him and Giant Sand becoming a hub of creativity in which collaboration with many other artists such as Isobel Campbell, Kristin Hersh, M Ward and the late Vic Chesnutt have proved fruitful. This idea of Giant Sand being a supportive musical collective was one that really appealed to Gelb; “I just liked the idea of having this kind of removed world, this brotherhood – the idea of a band being something more than a front person or dealing with the throes of fame.”

Blurry Blue Mountain is the band’s 25th studio album and, despite not being their most ambitious record to date, stills sounds fresh and relevant to America’s alt.country music scene. Those who claim Giant Sand to be their favourite band (a small but hardcore contingent) will love the further refinement of Gelb’s Southern gothic country drawl, whereas new comers will be enticed into investigating the bands large and compelling back catalogue.

Album opener Fields Of Green is a melancholic folk song in which Gelb’s idiosyncratic hushed delivery injects further meaning into the world-weary lyrics about the acceptance of ageing and personal heroes which have been and gone: “That which doesn’t kill you, really does make you stronger”.

In Chunk Of Coal, Gelb finds a level of boozy glumness on par with Nick Cave and Neil Young’s Tonight’s The Night. It’s a self-deprecating piano-led jazz song where Gelb finds times to cherish the lover who has a golden touch and thanks her: “She had the eye to find the diamond in this old chunk of coal.” The album as whole finds Gelb in a reflective mood, looking back over the good and bad times of his life and finally appreciating his personal welfare and state of mind.

Ride The Rail is one of those Giant Sand songs that makes you realise just how important the band was in shaping the sound of weird Americana. Shuffling snare drums which give the song a dynamic shift in pace, and driving crunchy guitars. The recording is raw, the story seems almost 19th Century and the gang vocals in the chorus are fresh off the chain gang, but this is the sound of revisionism into country music’s history of story-telling and capturing the mood of an age gone by.

Blurry Blue Mountain sounds as if Giant Sand have ingested their entire history within a week and tried to replicate the whole affair into 50 minutes and 14 songs. Thin Line Man shows their penchant for heavier rock, No Tellin’ includes chiming slide guitar that is now ubiquitous in modern Americana (especially in Calexico), Brand New Swamp Thing portrays the band’s love for Bob Dylan at his funkiest. This is Giant Sand trademarked; the band who were once always ahead of the game, staring straight at the horizon and forging the future sound of America, are now looking back at the past and reflecting on what they have achieved. In Giant Sand’s case, it’s entirely justified.

Giant Sand’s 25th album Blurry Blue Mountain is out on 25 October 2010 through Fire Records. The label is reissuing the band’s back catalogue, beginning with debut Valley Of Rain on 4 October. Howe Gelb plays a solo show at London’s Cafe OTO on 6 November, with a full band show slated for the Queen Elizabeth Hall on 4 November.