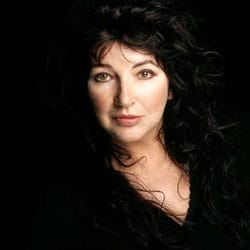 Kate Bush is back, 12 years since The Red Shoes, with a double album: Aerial. Her record label, EMI, have treated the album’s launch with the same absurd security as the latest releases by Coldplay and Robbie Williams. Advance review copies weren’t available – for this was meant to be “an event”.

Does Bush really live up to the hyped Mystery Maiden image? Is she the Stanley Kubrick of pop? In the run-up to Aerial’s launch, the press were full of stories about Kate Bush. She was depicted as a strange, reclusive star who refuses to play the traditional PR game.

And there will, as ever, be the one interview where she expresses her perplexity at how she is so utterly misconceived as an ethereal, other-worldly goddess who, like some mysterious deity, comes to visit us as irregularly as a minor comet: album five in 1985, album six in 1989, album seven in 1993 and now Aerial in 2005.

For a persistent researcher, it’s not too difficult a task to understand that Kate is not quite what she is perceived to be. Time after time, she has uttered the same amazement at how far her reputation precedes her and how little it resembles her. “People have (a preconception) of me as a sort of big Bronte fan, a Tolkien fan, the pre-Raphaelite lady,” she told VH1 in 1989, “which I think is actually a very big misconception.” In 1983 she said “if people look at the album covers and buy the records then listen to them and perhaps read the lyrics then a lot of this mystery about me will fade.”

Her rare interviews consistently reveal a woman who is more earthy than ethereal. This always seems out of kilter with the perception of her as an alabaster beauty who floats just above the ground, probably in that red dress she wore in the Wuthering Heights video.

She is no stranger to using the language of the gutter. Of the infamous Gered Mankowitz portrait of her in a leotard, which caused traffic havoc by being placed on the back of London buses, she told the NME: “I suppose the poster is reasonably sexy just because you can see my tits”. Well, quite. To the Record Mirror, she once said: “Some lyrics take a long time to come, others just come out like diarrhoea .” Charming. “If you’re writing a song… then you have a responsibility to (the fans). It’s important to give them a positive message (which) is far more effective than having a wank and being self-pitiful.” Lovely.

“Some lyrics take a long time to come, others just come out like diarrhoea…”
– Kate Bush on the creative process

Her fear of the press and how she has been misinterpreted, and her protectiveness about her privacy, has led her to a long-held position that she prefers the music to speak for itself, and declines to give personal details in interviews because she’s there to talk about the music. But, reflecting on this in RAW magazine in 1989, she revealed how much this has actually worked in her favour. It is worth quoting her in full:

“I went through a period where I didn’t actually speak to anyone (in the press) at all. Or if I did, I was very careful about when I did it and who I spoke to. And I think two very positive and interesting things came out of that…

“Firstly, I think I achieved what I wanted…suddenly my music started speaking for me instead of this personality whom the press had tremendous preconceptions about anyway. And through that, I think people took my music more seriously.

“And, secondly, it created this sense of mystery about what I did; I think that helped a lot as well with the way people were ready to receive my music.”

What this suggests is that Bush is acutely aware of how keeping quiet actually enhanced her reputation as a musician. The public and more particularly her fanatical followers love to know what they cannot find out. Hence her refusal to tour since the rock pantomime of 1979 has taken on comparable mythological status to awaiting the Second Coming. Yet it has nothing to do with Bush being reclusive and shy which is the reputation it has garnered.

Reading between the lines of what she has said about touring being exhausting and that she is not being happy being herself on stage, preferring to play the characters she has invented for the song, it seems clear that she cannot commit to doing anything by halves. Like taking 12 years to finish an album, for example.

Indeed, Bush has said that part of the problem she has is that she is afraid to let something go and be publicly appraised in case it falls on their approbation. She told You magazine in 1989 that “it’s very hard to stand back from an album, allow it to be finished and then let people evaluate it for what it is. It’s a terrifying process for me. And consequently making the album in the first place gets harder and harder for me.”

The public and the press like to believe the myth that Kate is a Howard Hughes-like genius who makes occasional forays into the world of mere mortals, like a tooth fairy leaving a pound. It would be rude to suggest that she cultivates this, and her candour when she is interviewed suggests that she could easily reveal something personal she had not intended to. EMI, with the security around Aerial at a maximum before its release, will not be hurt by the hype about the return of the mysterious Bush. But is the excitement reserved for new Kate Bush material justified by her historical output?

The evidence is mixed. For every pounding Hounds of Love, there’s a pompous Army Dreamers, and for every sensual Kick Inside, an unintentionally hilarious Dreaming complete with sheep noises. You may disagree about where the unevenness lies, but it is still there.

Her latest single, King of the Mountain, which takes Bush’s most successful songwriting formula of layering riffs and rhythms upon one another in increasing intensity over the course of five minutes, is accompanied by the cheesiest video ever which actually tells us more about the meaning behind the song than we really want to know.

When Bush grounds her musical electricity visually, it often loses much of its spark. Cloudbusting is a sensual delight of looping string phrases which builds through her trademark drum sounds and floating, chorus-light melodic flow to an intense conclusion. The video, on the other hand, is an ambitious piece of kitsch.

In a sense, there is a tension between the Kate Bush we think we want (the one who gives us an album a year, tours constantly and tells all about her private life to Word magazine) and the Kate Bush we actually need. While the mythologising is not of Bush’s doing (except insofar as she realises its artistic fringe benefits), it sustains her in the public’s mind as an isolated genius whose wisdom and creativity are barely worthy of us.

I must confess: I too love the myth. Aged eight, I heard the dramatic beauty of The Man With the Child in his Eyes and fell in love. Later, when I learned how young she had been when she wrote the song (16), my frustrated teenage sexuality yearned for similarly aged young women who might have such sensual maturity. And her ability to stay true to an artist’s vision (except on, in my view, misconceived forays into politics such as Breathing) has meant that she has dodged bullets around incest and implied paedophilia in her songs. As she herself has said, she’s glad that The Sun doesn’t (or can’t) read her lyrics.

I have bored people silly at parties with my passion for the woman who has added music to poetry and, possibly more importantly, created some of the most heartbreaking melodies ever written (Moments of Pleasure is a particular gem). Freak or unique, she has never been less than sum of her parts.

Much as she may not wish to accept it, her Celtic looks, eccentric sexual persona and that picture of her tits in a leotard means that she has a power over certain heterosexual men that is difficult to avoid. As Johnny Rotten said, at the Q awards a few years ago when she received a lifetime achievement award, “I love you, your music is fucking brilliant.” I know exactly how he feels.