by Mic Wright
published: 30 Apr 2012 in One For Keeps, Spotlights
Tweet 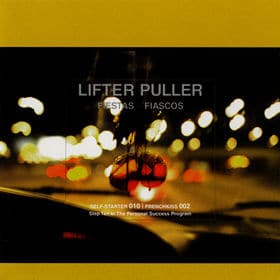 One For Keeps is a new features series in which musicOMH writers wax lyrical on albums they’d just not be able to cope without. Kicking things off, Mic Wright lines up Fiestas + Fiascos by Lifter Puller, the band The Hold Steady used to be…

Sometimes it’s wonderful to listen to a song that gives you the anxious leg twitch. Songs that are like amphetamine rubbed into your gums. The first taste is free and I want you to snort Lifter Puller’s 2000 album Fiestas + Fiascos deep and hard.

See, concept albums have a bad name. Because it’s not all Quadrophenia and Tommy. There’s a metric tonne of awful concept albums out there stinking up undiscerning record collections and service station bargain bins. But Fiestas + Fiascos is one of the good ones and an excellent entry drug into the twitchy Twin Cities world of Lifter Puller.

The driving force for Lifter Puller was Craig Finn, who would later re-emerge with The Hold Steady, taking his narrative lyrics into a land inhabited by classic rock and the laughing ghost of Phil Lynott. But Lifter Puller was a more art rock proposition, thin trebly guitars and clattering drums. The lyrics are so rich that they stick to your brain stem like treacle. Every listen reveals another little couplet to fall in love with. Lifter Puller put out four great albums between 1994 and 2000 but the last is the best place to start.

Fiestas + Fiascos tells the tale of Nightclub Dwight, his club The Nice Nice and a rather large amount of cash he owes to a dealer, The Eyepatch Guy. It doesn’t end well for Dwight and the distorted threats that lead to his demise are a moment of spine-tingling musical magic: “I want Nightclub Dwight dead in his grave/I want The Nice Nice up in blazes.”

What’s particularly wonderful about Lifter Puller, and Finn’s later work with The Hold Steady, is how he uses motifs and characters again and again. Start listening to either band and you’re diving into a world which repays you with each listen. And with Fiestas + Fiascos, Finn created the musical equivalent of The Sopranos finale, a brilliant tying up of the loose ends before he disappeared and was resurrected with a new cast of obsessions through The Hold Steady.

Fiestas + Fiascos opens with Lonely In A Limousine, a insouciant shuffle of a song about a woman boozing it up in the airport bar, cigarette girls fighting and someone turning themselves in to the district attorneys office. If theres an indie rock record with a more dramatic lyrical opening, Ive yet to hear it: A doubles just a dollar more/when youre living in an airport bar/I got everything I need at the duty free/Peter Panned into NYC/took the non-stop night into gay Paris.

The records real twitchiness kicks in with Candys Room, which reintroduces the listener to The Nice Nice. Its not the most pleasant club (Youll be covered up in powdered drugs by the end of the night if youre still in The Nice Nice) but theres something oddly appealing about the scene Finn conjures up. Its the kind of messy night you crave in your late teens and early 20s, and look back on ruefully from the crest of 30.

Insistent organ pummels Space Humping $19.99 into your consciousness with the narrator making it clear that his girl is HIS girl and that you, you pervert, dont have anything she wants. The same, sordid, sexual tone carries over into Manpark, a vision of a central city park full of cottaging men and drug addicts (With the power to the people making money with their mouths).

Katrina And The K-Hole brings the tempo down to introduce another character wholl be instrumental in Dwights downfall. Its a maudlin, morning song with birds in the background and a distinctly hungover sounding Finn painting a picture of the drugged up, lucked out Katrina: When youre speeding towards sunrise/Katrina is a bit much to say/now we just call her K.

Lifter Puller vs The End Of The Evening and The Flex And The Buff Result act as a pair to conclude the story. The former puts the band into the frame (Love is like a battle of the bands/crank up your amps man) while the latter sees The Eye Patch Guy finally getting to the end of his tether and demanding the killing of Dwight and the destruction of the Nice Nice.

If Raymond Chandler had written indie rock records, he would have been in Lifter Puller. Fiestas + Fiascos is their Maltese Falcon. Its littered with delicious details and spiked through with a kind of darkness that you can feast on for weeks. If youve heard The Hold Steady and found their hijacking of hard rock tropes a little bit lumpen, Lifter Puller is the place to go. Its got all the narrative and none of the obvious riffs.