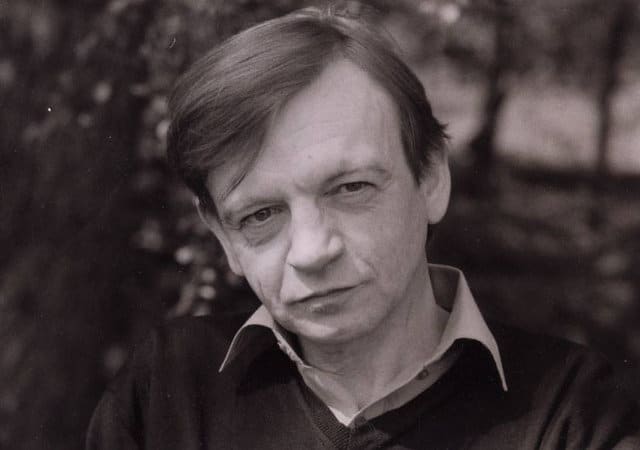 One of the most influential figures of the post-punk era, Mark E Smith died on 24 January  2018. Smith was present at the infamous Sex Pistols gig at Manchester’s Free Trade Hall in 1976, and was inspired to form The Fall shortly afterwards. Over the next 40 years, the band released 32 albums and counted over 60 different members, including two of Smith’s ex-wives and 6music DJ Marc Riley.

As well as being the irascible, belligerent frontman, Smith also became an unlikely cultural icon, making unforgettably awkward appearances on Newsnight and The Adam & Joe Show, as well as once reading out the football results on the BBC’s Final Score programme.

We’ve been here before of course. Smith doesn’t do things by halves, and repetition has always been at the heart of The Fall’s mantra. Back in March 2017 the BBC accidentally announced Smith’s death, so when news that he’d passed away started to filter through on Wednesday, there was definitely a feeling that, just maybe, someone somewhere had made a grave error – again.

It is understandable that people thought it couldn’t be true – there was something about Smith that felt almost indestructible. Even when he’d taken to the stage in a wheelchair recently, or when the most recent shows were cancelled due to ill health, there was still a sense that, even though things weren’t looking too great, Smith would just keep on going – because that’s what he did. The idea that death would stop him just didn’t seem plausible.

For 40 years Smith and The Fall cut a singular path through the very heart of music.And yet summing up what made Smith such an important figure in popular music is nigh-on impossible. If you got The Fall, you really got it, and you’ll already have a list a mile long. If you didn’t get it you’re probably wondering what all the fuss is about. On the surface of it The Fall seemed like a relatively small band, but their influence is far reaching and will no doubt continue to be so.

Too ramshackle and awkward for chart success, they never broke through and gained the popularity that they deserved, but that kind of commercial recognition was never really part of the deal. There’s an old adage about the debut self-titled Velvet Underground album – it didn’t sell many albums, but everyone that bought one went out and formed a band. In a similar way, The Fall’s success was arguably in influencing others and in pursuing their own art and vision. They might not have sold masses of records, but so what?

Smith and The Fall have been influencing generations of musicians, artists and, more importantly, everyone who heard them and took them to heart, over nearly five decades – a period of time comparable to the likes of David Bowie. Unlike many of his contemporaries, there’s rarely been a pause for breath. Smith’s work ethic was impressive, but unlike Bowie, there were no characters or personas on show: what you saw was what you got.

Every year there seemed to be a new album, another tour, and on many occasions a new band. Somehow, even with an entirely new band under his stewardship, Smith managed to make them sound like The Fall. There might have been slight differences, but with Smith’s vision leading the way, there was always something quintessentially The Fall about everything the band ever recorded.

There’s been the ’70s spiky punk incarnation, the poppier version during the ’80s, the ’90s bought a flirtation with Drum & Bass on Levitate, whilst the ’00s and ’10s found them embracing a motorik approach and barely intelligible growled vocals. Yet all those manifestations of the band possessed a sound and an ethos that could only ever be identified as The Fall. It wasn’t just Smith’s idiosyncratic vocal delivery, the band was like an entity that he guided and presented – he was a part of it, but he wasn’t The Fall. His group possessed an energy all of its own, and it was instantly identifiable. They needed him to exist, and it is a tragedy that the comfort of knowing that a new album by The Fall is only ever just around the corner has been taken away forever.

“The band was like an entity that he guided and presented – he was a part of it, but he wasn’t The Fall. His group possessed an energy all of its own, and it was instantly identifiable.”

Undoubtedly, Smith would most likely find the eulogies and fuss surrounding his passing to be mystifying. On It’s A Curse from The Infotainment Scan he railed against nostalgia and the “look back bores” and the idea that he would be viewed through rose-tinted glasses would most likely be considered abhorrent. But whatever, the Hip Priest needs to be appreciated.

His way with music has influenced multiple bands and encouraged countless musicians to make a start. His phenomenal gift for language, twisting and perverting it into new shapes was, at times, utterly breathtaking. There were times when The Fall were essentially a poetry delivery system. His references and literary nous introduced us to authors, ideas and artists we had never heard of. He brought bare-assed ballet to a rock audience. He never compromised his art. He was funny. He was unpleasant at times. He was the bloke down the pub with great stories. He was our poet laureate. He was a curmudgeon. He was a 60-year-old man. What are you going to do about it? There will never be another Mark E Smith.

These are things that need to be celebrated and mourned at the same time. With the passing of Mark E Smith, to some of us, it feels a bit like the jig is up. Can there ever be something as idiosyncratic, so instinctive, so vital and exciting again? Once you heard The Fall, everything seemed dull by comparison. Thank you Mark, for making life seem a bit brighter. Hip Hip.