This reissue’s kitchen sink approach to an album which laid the foundations for a whole decade of heavy metal is only fitting, finds Ross Horton 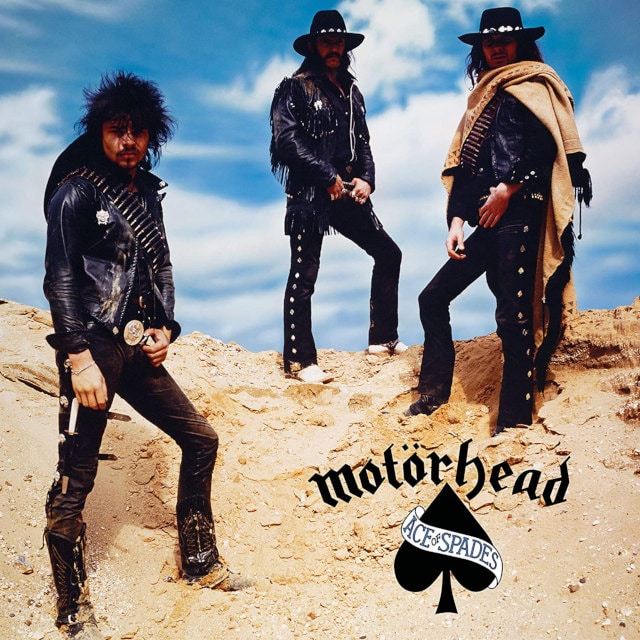 Motörhead‘s legendary 1980 album, Ace Of Spades, is being reissued for its 40th (!) anniversary with a whole host of extras that truly befit the kind of album this thing is. Ace Of Spades is truly a once in a lifetime album, one that found a band not happy with perfecting their greasy blend of fiery, thunderous rock ‘n’ roll – as they had on 1979’s Overkill – but going one step further, and laying the foundations for a whole decade of heavy metal.

It’s being reissued in various formats, but foremost amongst them is a “7LP+10″+DVD box set that offers a remastered album, live performances and rarities as well as a 5.1 mix of the album. The box set features the following: The Ace Of Spades album on vinyl, half-speed mastered and created from the original master tapes; two double-live albums of previously unheard concerts from the Ace Up Your Sleeve tour; A Fistful Of Instrumentals: A 10” EP of previously unreleased, instrumental tracks from 1980; The Good, The Broke & The Ugly. A double album of B-sides, outtakes and rare tracks; Ace On Your Screens: a DVD compilation of rare TV appearances from 1980-81, a live concert from 1981 and a 5.1 audio mix of the original album; ‘The Ace Of Spades story’ – A 40 page book telling the story of Ace Of Spades through previously unpublished interviews with the people that were there. It includes never before seen photos and memorabilia, a reproduction Ace Up Your Sleeve tour programme, a reproduction Motörhead Rock Commando comic, a set of five poker dice that can be played on the game board inside the box set lid… And, for the first 666 customers, a partridge sat in a kitchen sink. Exhaustive just about covers it – the stream reviewed here features a whopping 73 tracks, and that’s without all the paraphernalia.

However, much like last year’s Motörhead 1979 box set, it’s not the extras or the box or the goodies that are the draw here. The appeal of a box like this is the opportunity to sit down with a classic album and finally feel that it’s been acknowledged as the legendary record you always knew it was.

Ace Of Spades, the fourth and some would say best Motörhead album, came out five years after front man Lemmy was unceremoniously booted out of Hawkwind for “being on the wrong drugs”. In that time, he’d already made humongous strides in carving out his own niche in the world of rock music, a niche that pretty much no band ever tried to sit in alongside him. There was pre- Motörhead and post- Motörhead, and no in-between.

The album itself is, by any stretch of the imagination, one of the greatest albums of all time. It’s both a product of its time, and a symptom of it. Swashbucklin’, hog-ridin’, hard-livin’ tales of woe and glory sit alongside (frankly unacceptable) depictions of heinous behaviour and questionable attitudes to underage sex. How much of it was real, and how much of it was a fabrication to win slaps on the back from similarly filthy folk is up to you to decide.

It opens with the title track… which you’ve probably heard. It’s a blistering, white-hot sledgehammer of a track that takes everything Motörhead had done previously, and pushes it to newfound extremes. It’s the sonic equivalent of an adrenaline shot straight to the heart, with Lemmy’s guttural croak and his engine-roar bass coasting at a smooth 120mph alongside “Fast” Eddie Clark’s post-Jimi Hendrix, post-Jimmy Page guitar pyrotechnics and “Philthy Animal” Taylor’s hyper-speed drumming.

Then comes Love Me Like A Reptile, which borrows the swinging blues strut of ZZ Top and turns it into something wholly unwholesome. The walloping gallop of Shoot You In The Back is followed by the band’s calling card, Live To Win, which features some of Lemmy’s most vicious lyrical posturings – and an absolutely raunchy guitar lead.

Fast and Loose is an update on Thin Lizzy’s Celtic rawk, just with extra grease and grime. (We Are) The Road Crew, which follows, is arguably Motörhead’s finest moment – a tale of life on the road, written as an ode to Motörhead’s crew, with experiences drawn from Lemmy’s time roadying for Hendrix. Fire Fire is one of the lesser-known and largely under-appreciated cuts on the album, but that’s simply due to its place in the running order – not many tracks could follow Road Crew and live long in the memory.

Then comes an unsavoury number that’s (musically at least) an homage to Alice Cooper ’s School’s Out, only stripped of its irony and humour and turned into something rather foul. Dance, and Bite The Bullet, offer more visceral thrills, before the album closes with an all-timer in The Chase Is Better Than The Catch, which takes the chunky greasepaint rock of KISS and Cooper and scuffs it up, breaks it down and bends it into a wonderfully horrid shape. The album ends with aptly-named The Hammer, which sounds like you’re being hit with a… hammer?

Then, if you’re listening sequentially to the box, there are 30 live tracks before you get to the goodies. Amongst the highlights are all of the instrumental demos, a version of Bomber performed by Girlschool, and an alternate version of …Reptile, and an incredible alternate version of Ace Of Spades that sounds more like a turbo-charged Hawkwind than anything else Motörhead had put out until that point. It’s all genuinely fascinating stuff, and I only wish I could report on the rest of the contents of the box to give you the full flavour of what you’re getting.

It’s kind of fitting that when once asked what his band did, Lemmy said, “Motörhead don’t fit into any category, really. We’re not straight heavy metal, because we’re a rock ‘n’ roll band, which no-one knows how to market anymore.” Lemmy, how wrong you were – they’ve figured out how to market you just fine: warts and all.