Spotlight: Nick Cave in One More Time With Feeling 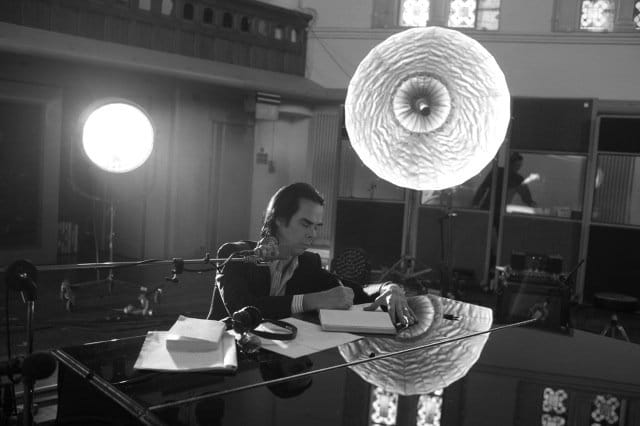 Nick Cave in One More Time With Feeling

Close to the end of One More Time With Feeling, Nick Cave looks at us and says “I don’t know what the fuck I’m doing now… I don’t know why I’m doing this,” gesturing at the camera in front of him. From behind the lens the director, Andrew Dominik, concurs. Dominik doesn’t know why Cave is doing it either.

What may have started as an act of “self-preservation”, a way of publicising a new album (Skeleton Tree) without having to go through the process of dealing with a scrum of journalists awkwardly beating around the same bush, trying to find a way to ask the question that shouldn’t be asked about the death of their son Arthur, becomes, in a fractured, accidental, slightly messy way, something far more complex than a documentary about a record.

You can understand the original intention. It fits with Cave’s persona: private, enigmatic and driven by a need to work, to create. That image from 20,000 Days On Earth of a besuited Cave striding to his Brighton office every day and doing his 9-5 songwriting at his typewriter. Which isn’t to say that, judging it on those terms, One More Time With Feeling isn’t successful.

We do find out about the album. We hear each song, with Warren Ellis, Jim Sclavunos, George Vjestica, Martyn Casey and Thomas Wylder bringing the material to life in the studio. It looks beautiful and stark in black and white and 3D. You get the insight of Cave dismissing the idea that the songs were in any way portents for what happened, which equally suggests that Skeleton Tree can’t simply be categorised as a record built from grief, but he also admits that because of the timeline of events, grief was the overriding factor in the recording process.

He also admits that he hasn’t done what he normally does with the lyrics, honing and preparing each line until it was perfect and that’s due to that overarching need to get this album done and out there. There’s a couple of short, almost throwaway scenes of Ellis talking to someone about his soundtrack work and it isn’t until you sit down and listen to Skeleton Tree again that you realise how much of the textured soundscapes are bleeding through into the Bad Seeds now.

But in the end, there is just too much other stuff for it to remain unsaid. The subtext has too much weight for it not to be addressed. Which isn’t to say Dominik is trying or prying for an exposé. There’s no way the film would directly ask a question about it.

Strangely the closest we get is the opening sequence, in a cab with Ellis. He’s clearly talking about what happened and the aftermath. As he’s talking the 3D camera breaks. While the crew apologises and tries to fix it, it’s as if that fourth wall is shattered. Something clicks and suddenly Ellis remembers he’s on film talking about something he doesn’t want to talk about and that he’s never talked about before. Then he stops.

Cave is like that too, initially. As they ask him to redo scenes of getting dressed and walking out the door you can sense the exasperation – then it’s more like “I don’t know what the fuck you’re doing…”. But over the course of the film both he and his wife Susie become more and more open and suddenly this artist who has remained resolutely private, enigmatic and utterly prolific for almost four decades is left to openly ponder, while acknowledging the kindness of strangers, “when did I become an object of pity?” and talk about losing his sense of objectivity.

So what could have been about a record becomes about a family and about trauma and grief and how all of those things collide. It is painful and brutal and honest. Some scenes, like the one where Susie shows a painting of Arthur’s, keep going for what feels like an eternity. Us and them sat around a table in silence with no one knowing what to say. What can you say. What is there to say.

To call it enjoyable would be untrue. To say it is catharsis or a coping mechanism for the family would seem crass – that’s for the Caves to say, not us. But One More Time With Feeling is both an unforgettable and exceptionally moving experience. You could listen to Skeleton Tree without seeing the film. And you could watch the film and never listen to the album again. But in either case it would feel like you’d be missing out on an important part of the whole.

Further information on One More Time With Feeling can be found here.

More on Nick Cave can be found here.