One For Keeps: Nine Inch Nails – The Downward Spiral

by Max Raymond
published: 13 Jun 2012 in One For Keeps, Spotlights
Tweet 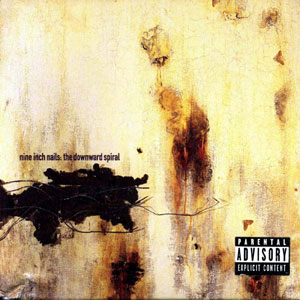 One For Keeps is a features series in which musicOMH writers wax lyrical on albums they’d just not be able to cope without. Max Raymond here recalls Trent Reznor’s 1994 change of direction, a concept album that predicted the future destruction of man…

In 1994, Oasis were making tunes about wanting to be rock ‘n’ roll stars and hoping that they’d live forever. Blur were writing songs about modern life in London. The tide was also changing across the Atlantic in the wake of Nirvana, as American rock became more radio-friendly and pop-centric thanks to the likes of Green Day and Weezer. In short, everyone was making music about how fun it was to hang out with friends, and about living life to the full.

Trent Reznor, front man and sole member of Nine Inch Nails, had other ideas. After releasing his synthpop-laden debut, Pretty Hate Machine, in 1989 he spent the next couple of years touring constantly and becoming more and more frustrated with his record label, TVT. This led to him and his touring band smashing up nearly every single musical instrument they played on stage and heading off in a more rock-orientated direction on their 1992 mini-album, Broken – half an hour of pummelling rage as well as a defiant middle-finger salute to TVT.

The Downward Spiral, an industrial rock centred concept album about the destruction of man, is an hour-long descent into total madness that went beyond rage and anger. Few rock records of the last couple of decades have been this claustrophobic and bleak but Reznor not only managed to crack it, he crafted one of the most cohesive, varied and heavy-hitting rock albums of the ’90s, and it still sounds fresh and exhilirating. That’s some going considering it’s nearly 20 years old.

Why does it work so well? Amongst everything else, it is a proper album. Regardless of whether or not the narrative/concept was a deliberate attempt to make a concept album, everything about its structure has been meticulously designed to be listened to as a whole. Even its tracklisting is ordered to the point where Reznor makes it as hard as possible for the listener to be distracted as a furiously uptempo number is followed by something totally different and downtempo.

It’s these dynamics that make it so enthralling. The rallying call-to-arms fury of March Of The Pigs is fast, hard and brutal, yet nothing beats the initial shock factor when the final piano notes fade out and makes way for Closer, as dysfunctional and distorted a song about lust and desire as it’s possible to write. Likewise, the bottled-up anger of I Do Not Want This is followed by Big Man With A Gun, a punk-esque burst of loud guitars and violent synths that is utterly sick and twisted.

It’s a rollercoaster of emotions that ends with an expaserated protagonist at the end of his tether. Hurt, the last song, is six minutes of agony and anguish. In a way it acts as a reveal of sorts: the reveal being that, underneath the beating drums and wave after wave of abrasive sound, there is a deeply emotional underbelly to it all. Many artists have since tried to cover it in ways that have ranged from the truly dreadful (Leona Lewis) to the tear-jerkingly haunting and beautiful (Johnny Cash) but the original remains a harrowing, raw expression of pure emotion that is hard to match.

Those aspects are a lot to take in, but they just scratch the surface. Its ambitions were huge and Reznor pretty much tackled every big subject: religion, society, sex, violence, suicide… it’s enough to make your head spin. It makes The Wall, another album about an equally maniacal character and all-over-the-place dynamics and styles, look tame in comparison.

It’s also a perfect example of a rock outfit understanding keyboards and using them intelligently. Consider how indie bands these days start messing with synthesisers, in the process thinking that they’ll somehow sound ‘bigger’ automatically. Nine Inch Nails has never been a band that uses electronics just for the sake of using them. They are played with care and precision and, at the time, this was sewing together the aesthetics of their two previous releases to great effect.

It also gave Nine Inch Nails a platform on which to build on for the future. The combination of electronic elements and crunching guitars, which was the result of a heavy dose of experimentation in the studio, led Reznor to go even further on his next release, The Fragile, in 1999. The concept album would be something he’d return to in 2007 with the highly underrated Year Zero. The instrumentals, A Warm Place and the title track, both display his ability to create pieces of music that are not only atmospheric but also emotional; they convey a sense of hopelessness and torment that is just as devastating as his exclamatory and defiant statements. He would later build on this with the ambient Ghosts I-IV and his soundtrack work.

However, the more immediate aftermath of The Downward Spiral, when Reznor ironically started to become the character he was portraying and went down his own path of substance abuse, is already well documented and it’s because of his current status as a successful Hollywood film composer that the record is now such a strange one to approach. This is essentially an artist unknowingly predicting his own turmoil with startling accuracy and a near-complete reversal of the an artist suffers for his/her art mantra.

It’s easy to see why, in a year where more accessible and hook-laden records like Parklife and Definitely Maybe set the media agenda that it didn’t quite connect with a British audience in the same way that it did in its native America. In the UK The Downward Spiral has not even sold near a tenth of the amount that’s been shipped in the USA, where it is regarded as a major commercial success; there it has exceeded the four million sales mark. But in the years since its release has gained more and more devotees and, whilst it’d be inaccurate to call it a ‘cult’ success, it has found a selective audience that treasures all 14 songs.

No matter how many copies it’s sold though, The Downward Spiral will always remain a powerful tour de force that works on every level. In it, Trent Reznor created one of modern rock’s most daring and adventurous artistic triumphs.