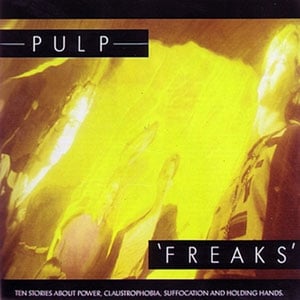 Do you remember the first time? For a lot of admirers of the perennial misfits from Sheffield, it will have been Common People. Or going back slightly further, possibly the His N Hers album. Or maybe it was that moment where Jarvis Cocker leapt onto stage at the BRITS to waggle his arse at Michael Jackson, cementing his transformation from obscure indie-popstar to full-on ‘celebrity’ and the pitfalls that come with that kind of status – as memorably recorded on the This Is Hardcore album.

Yet Pulp have been around a lot longer than many people realise. Cocker was already heading towards his mid-30s when he finally became a star, the culmination of a journey started in 1983. To mark the band’s reunion, and a recently confirmed headline spot at this year’s Coachella Festival, Pulp’s first three albums have been repackaged and re-released by Fire Records. Although the quality is varied, they mark a fascinating record of the band’s evolution from twee jangly indie-pop to the eventual Glastonbury headliners they became.

Pulp’s debut, It, is likely to prove a bit jarring for those unfamiliar with the band’s early output. It has a folky, almost pastoral, sound to it with acoustic guitars, strings, pianos and flutes all close to the fore. It’s a strange listen, especially with a 20 year old Cocker straying out of tune occasionally, but it’s oddly charming in its own way.

Understandably enough, the songwriting isn’t that strong, with only My Lighthouse (co-written with future Mission guitarist Simon Hinckler) and Joking Aside really standing out. It’s in the latter that the first hints of lasciviousness that was to become Cocker’s trademark are displayed (“oh I’d like to turn you over”, runs the chorus). Love Love is catchy enough, with Jarvis bearing an uncanny vocal resemblance to Gary Jarman of The Cribs, but Looking For Life, Blue Girls and Boats And Trains all sound heavily dated now.

Freaks, released four years later in 1987, was the album that first showed the signs of Pulp evolving into the band they became eventually. Russell Senior and Candida Doyle joined the band, and the former’s influence was immediately apparent. Indeed, he even took lead vocals on two tracks, and the overall vibe is much darker – the opening track, Fairground is almost terrifying. The more sinister atmosphere, together with both Cocker and Senior’s flat vocal delivery makes for a claustrophobic listen.

Yet there are still moments of genius here – Masters Of The Universe is the first genuinely great Pulp single, while I Want You has a sweetness of touch that makes it a blessed relief from some of the album’s more paranoid touches. Cocker’s vocals still need a lot of work though – the off-key meanderings of Life Must Be So Wonderful and They Suffocate At Night become rather painful to listen to.

Freaks, together with It, has its memorable moments, but probably remains of interest only to Pulp completists. Separations though, finally featuring the ‘classic’ Pulp line-up of Cocker, Senior, Doyle, Steve Mackey and Nick Banks, is a whole different story – the sound of a confident group finally hitting its stride and sounding like the band that most of us know and love.

Released in 1992, Separations still sounds, in parts, as fresh as the best of Pulp’s output. In particular, it’s possible to hear the carnal-fuelled yelps and lusty whispers of I Spy and Sheffield: Sex City in the standout track My Legendary Girlfriend. It’s the first album where Jarvis truly feels comfortable in his persona, and the first album where ‘sleaze-disco’ could genuinely be cited as a genre.

Although not everything here is essential, there are several moments that stand up with the best of their back catalogue – the pulsating beats of Countdown and the gurgling lustiness of Death II. The influence of house music is writ large in the seven minutes of This House Is Condemned (complete with deadpan Russell Senior delivery), while She’s Dead seems to be an early cousin of Live Bed Show.

The three albums make for intriguing listening – although they’re not as strong as what came afterwards, this is the sound of a band slowly finding their feet and slowly evolving into one of this country’s truly great pop groups.

The deluxe editions of Pulp’s albums Freaks, Separations and It are released on 20 February 2012 through Fire.