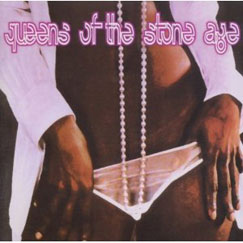 It’s quite hard to think of Josh Homme as anything other than a Rock Colossus these days; he’s seemingly been around for ages yet has been constantly at the top of his game. Since reeling off a list of eminently enjoyable pharmaceuticals on Feel Good Hit Of The Summer back in 2000 Queens Of The Stone Age’s meteoric rise has been nothing short of phenomenal.

While it might have been the euphoric chanting of “nicotine, valium, vicodin, marijuana, ecstasy and alcohol” that first alerted many to QOTSA, it could be argued that the band’s defining moment came two years previously when Homme unleashed the first album under the Queens moniker on a largely unsuspecting world.

It seems unlikely now but when Homme’s previous band Kyuss split, there wasn’t the widespread sense of disappointment, as perhaps there should have been. That band’s final album …And The Circus Leaves Town hadn’t been on a par with their previous efforts Blues For The Red Sun, or Kyuss (known to many as Welcome To Sky Valley) and their passing wasn’t mourned greatly at the time.

Josh Homme found himself the touring guitarist for the admirably dysfunctional Screaming Trees, a band whose albums Sweet Oblivion and Dust were among the best to come from the Grunge era of the mid ’90s. Their vocalist Mark Lanegan would eventually become a part of the Queens Of The Stone Age line up, while their guitarist Van Conner found himself part of the Homme stop-gap Gamma Ray EP which featured the songs Born To Hula and If Only Everything (later known simply as If Only). Gamma Ray slowly morphed into Queens Of The Stone Age, and a split EP with Kyuss followed, featuring those songs recorded at the Gamma Ray sessions.

At this point the band was stripped back to just Josh Homme and ex-Kyuss brother in arms Alfredo Hernndez. It was this duo that was to record the first and arguably greatest Queens Of The Stone Age album – the bass player credited as Carlo Von Sexron being a pseudonym for Homme himself. In essence Queens Of The Stone Age’s first incarnation was a Josh Homme solo album. While later albums still centred around Homme’s songwriting, other members of the band such as Nick Oliveri and Lanegan got to contribute. It’s only here on the band’s first album that Homme is flying almost entirely unaided.

Regular John kicks the album with real intent, those familiar with the grinding unrelenting rhythmic pulses of Kyuss wouldn’t have been entirely disappointed with the drop-tuned guitars carving a deep furrow propelled by Hernandez’s tight drums. But while the sound wasn’t entirely dissimilar to Kyuss, the main riff was far more direct, seeking to pummel rather than negotiate dense drawn out mantras as his previous band had. Homme’s vocals meanwhile occupy a peculiar otherworldliness, floating high in the register and the mix, he’s a ghostly presence floating above the driving steamroller riffs. It’s only the content of the lyrics, alluding to illicit sex tinged with violence that allies him entirely to the overall feel of the song.

It is of course Josh Homme’s dedication to the unmitigated joy of the riff that forms the primitive yet effective base for this album. Cutting to the chase more often than not, these songs rumble their way into the subconscious with barely any thrills. Avon for example is almost motorik in its construction (Homme coined the phrase “robot rock” when describing the band’s sound at the time), keeping things mechanically taut throughout, alternating between a couple of riffs, and pausing for a brief guitar solo before its conclusion.

If Only changes pace slightly with its main riff adopting a swinging gait. The guitars might be strangulated with primitive distortion, but the centre point of the song is Homme’s basic but ultimately pop-inflected choruses. Clearly even at this early stage, he was aiming for something beyond the confines of the “stoner” tag his former band had been tarred with. Likewise, How To Handle A Rope is an infectious rattling blast that not only comes across as a radio-friendly hit, harking back to ’70s Rock ‘n’ Roll as it does, but sounds as if is playing his guitar at full pelt through the tiny speakers of a portable transistor to provide a fuzzy lo-fi feel.

There are of course more musically subdued moments such as the sprawling blissed out You Can’t Quit Me Baby which calls to mind the psychedelic offerings of the West Coast during the late ’60s. Lyrically however, things are still dark and unsettling – this being a tale of psychotic love and blood letting after all. It’s not until the song’s final passages that the band rekindles their acquaintance with the repetitive riffing that defines the majority of the songs found on the album.

In its original form Queens Of The Stone Age was a perfectly formed wonder, a relenting beast of lo-fi riffs, disarmingly gentle and melodic vocals and Hernandez’s quite exemplary drumming. This reissue tosses a few extras into the mix, and while it is welcome to hear the likes of The Bronze or These Are Not The Droids You Are Looking For again, their inclusion disrupts the flow of the album somewhat. This is particularly noticeable in the case of These Are Not The Droids… whose stop/start structure and aimless noodling feels like an unwelcome intrusion into what would otherwise be an endless flow of infinitely superior and far more direct songs. The spaced-out tribal throb of Spiders And Vinegarooms also feels out of place, initially harking back to Kyuss before it takes off into a beat heavy electroshuffle that just feels out of place within the confines of the album.

For the collector there’s not much to be gained from the three additions to the album either. All three songs have been available on previous releases (the Kyuss/QOTSA split and the 1998 spilt EP with Beaver). Such quibbling is of minor concern, regardless of the intrusion of these new additional tracks Queens Of The Stone Age holds up as a modern classic.

The band of course went on to achieve wider acclaim courtesy of Rated R and Songs For The Deaf, but it is this album that stands out as a massive achievement in their back catalogue. The question now is, just when are the Desert Sessions going to be re-released? There’s surely some unmined gold to be found in the archives.