Spotlight: Radiohead’s The Bends at 20 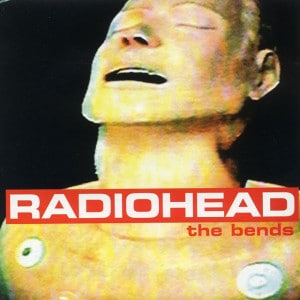 Choosing a favourite Radiohead album is sort of like asking a parent to pick their favourite child. Each one is uniquely different in its own way – with strengths and weaknesses – and while many do have a favourite, it is often easier to say that they are all loved in their own special way. And yet, for most fans of the Oxford quintet, their second record, 1995‘s The Bends, holds an extra special place in their heart.

The record, which celebrated its 20th anniversary on Friday, is really where Radiohead’s staggering career kicked off. Yes, Pablo Honey is officially their debut album and it did contain the world-wide hit Creep, but it is also the only Radiohead album that doesn’t establish any sort of identity. Released in 1993, the record did little to distinguish itself from the prominent alternative climate at the time, which was dominated by Nirvana.

That all changed with the release of The Bends two years later. It may have failed to build on the commercial success of Creep outside of the UK – only peaking at Number 88 on the US Billboard Chart – but from the moment the swirling guitars and jittery keyboard exploded into life on opener Planet Telex, it was obvious that we were dealing with a completely different beast to Pablo Honey.

Produced by John Leckie at EMI’s studios in London and engineered by Nigel Godrich – who would go on to produce all of the band’s subsequent albums – The Bends was the first indication that Radiohead were special, that they could not be easily categorised in a group with their contemporaries. It is also the record that saw Thom Yorke establish the lyrical themes and concepts that would go on to influence their future work.

The recording process was fraught, though, and is nicely summed up by the opening lyrics to Planet Telex, where Yorke sings “You can force it but it will not come”. The band started work on The Bends at the beginning of 1994, but despite being pleased with having both Leckie and Godrich on board, the pressure to follow up on the success of Pablo Honey told. Initial sessions did not go to plan and reports suggested Yorke and co were trying too hard to get it right.

Yet none of the difficulties they faced during the recording process comes through when listening to The Bends. If anything, the record sounds almost effortless – even if Yorke did use some of the frustration that abounded when creating it to write his lyrics. Kicking off with the bold statement of Planet Telex, there is rarely a moment throughout The Bends’ 50-minute run time that doesn’t evoke some sort of emotion.

One of the reasons it is often cited as a favourite among fans is that it balances being experimental while also delivering some storming rock numbers. Take the title track, which is essentially Yorke’s cynically charged take on the modern rock star. “Where do we go from here?” he yells, over Jonny Greenwood and Ed O’Brien’s huge, meaty guitar hooks.

Then there’s the startling, raw power of Just, which is arguably one of Radiohead’s most danceable tracks. Greenwood is at his ferocious best, with the song’s central riff grabbing the listener by the scruff of the neck and not letting go, as Yorke delivers a damning verdict on a narcissistic friend of his: “You do it to yourself, you do/ and that’s what really hurts/ is that you do it to yourself/ just you and no one else.”

Just is followed by another classic in My Iron Lung, which is said to be Yorke’s reaction to Creep. “This is our new song/ just like the last one/ a total waste of time/ my iron lung,” he sings in his haunting falsetto over the grunge-inspired hook, punctuated by short bursts of Greenwood’s chaotic thrashing. The outro of My Iron Lung provides a startling contrast to Bullet Proof… I Wish I Was, which is one of several acoustic moments throughout The Bends where Radiohead almost allow time for quiet reflection.

The most poignant example of this is The Bends’ emotional centerpiece, Fake Plastic Trees, where Yorke – inspired by a performance by Jeff Buckley – sings beautifully about a synthetic, artificial landscape. The song, which provides a perfect companion to the delightfully sweet High And Dry, is both devastating and weirdly comforting at the same time. It is certainly no wonder that Yorke broke down tears after completing it.

While it is often the stellar singles that people highlight when considering The Bends, the reason it is still remembered so fondly is that standard rarely drops throughout. The record’s remarkable consistency is demonstrated by the strength of (Nice Dream), with its rolling guitars providing an ideal backdrop to Yorke’s brooding falsetto vocals, and the highly underrated Sulk, which is his gloomy reflection on the 1987 Hungerford massacre.

A classic album should always leave a lasting mark, though, and Street Spirit (Fade Out) does this perhaps better than any other closing song. Many words have been written about it over the years and rightly so, because its gently picked chord progression is enough to send a chill down your spine. Described by Yorke as “the dark tunnel without the light at the end”, it delivers the final blow so effectively that there is no questioning its brilliance.

Looking back at The Bends – taking into consideration everything that has come since – it would be easy to consider it less forward-thinking than say OK Computer or Kid A, which are more regularly touted as the band’s best. Yet The Bends played such a major role in the formation of Radiohead as we know them today. It is everything that makes them one of the greatest and most influential British bands of all time – daring, captivating and emotionally raw – distilled in 12 of their purest songs. Not only that, it has hardly aged a day in 20 years.