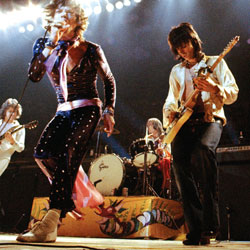 2010 is proving to be a year of resurrection for the Rolling Stones. May saw the expanded reissue of their masterpiece Exile On Main Street. Now comes restored and remastered DVD/Blu-ray versions of the notoriously elusive concert movie Ladies & Gentlemen… The Rolling Stones, originally released in 1974 in selected cinemas in the States and on VHS in Australia in the early ’80s.

It was filmed by Rollin Binzer in 1972 in Texas over four nights of the Stones’ Exile On Main US tour. The bonus features consist of rehearsal footage from Montreux, Switzerland, plus two interviews with Mick Jagger; one from The Old Grey Whistle Test in 1972 and the other made exclusively for this re-release.

Not only is the 15-strong set list made up of songs from the Stones’ creative peak in the late ’60s/early ’70s, but the film shows the band on top form as live performers. The no-frills approach focuses very much on what is happening on stage with very few shots of the audience, who are mainly just heard as an enthusiastic aural backdrop.

The film starts in near darkness as the concert is about to begin, with technical crew giving some instructions. We can feel the heightened sense of anticipation in the crowd rising to a crescendo as the MC announces “Ladies & Gentlemen… The Rolling Stones”, when their shadowy figures run onto the stage and noise and lights suddenly explode. Then, without any intro, the band launches straight into a storming account of Brown Sugar.

Highlights thereafter include a shimmering performance of Gimme Shelter that makes the hair on your neck stand up; the slow country blues Love In Vain oozing emotion; an inspirational version of gospel-tinged You Can’t Always Get What You Want; a brilliantly extended, keep-you-guessing stop-start Midnight Rambler; and Street Fighting Man ending in a orgiastic musical climax with Jagger bestrewing the audience with red flower petals.

Jagger set the prototype for the prima donna front man, here pouting and preening, swivelling and strutting like a cock on the roost as he ‘works’ the audience with his ambivalent sexuality, wearing eye-shadow and glitter, an open-neck shirt and a sash hanging down from his waist. Behind him the long-haired, gap-toothed Keith Richards is ‘in the zone’, with shy, head-down second guitarist Mick Taylor often unobtrusively stealing the show, while Bill Wyman chews gum like cud with his habitually bored bovine expression and Charlie Watts ‘does his job’ with the minimum of fuss. There is also sterling support from long-term collaborators Nicky Hopkins on piano and Bobby Keys on sax.

The intimate rehearsal of three songs shows that a surprisingly disciplined musical professionalism underlay the bohemian sex, drugs and rock ‘n’ roll lifestyle. In the 1972 interview just before the tour Jagger talks unassumingly about how the best Stones songs are written by him and Richards in partnership, while in the one 38 years later he looks back pleasantly surprised at how ‘together’ the band were on stage.

These gigs were the first by the Stones in the States since their infamous Altamont concert on 6 December 1969, when a member of the audience was killed by Hells Angels security, marking a dark end to ’60s flower power idealism, captured in the classic documentary Gimme Shelter. This film does not have the same historical significance, nor the voyeuristic attraction of Robert Frank’s Cocksucker Blues, whose frank depiction of the Stones’ off-stage decadent antics during the 1972 US tour led the band to suppress it, so that only bootleg copies are available.

Instead, Ladies & Gentlemen… The Rolling Stones simply shows one of the greatest rock ‘n’ roll bands of all time at their most down and dirty – guaranteeing satisfaction.