Spotlight: Songs of resistance, democracy and peace, where art thou? 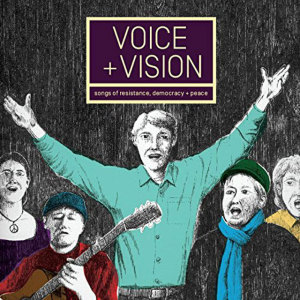 Much has been written about the general malaise afflicting the Left in these times and, in particular, its inability to gain ground as a progressive force in the popular consciousness. The message is confused, difficult to express and fails to capture the imagination of those so used to the slick production and well-presented certainties of modern media. In these days of New Labour, it is difficult to discern any real difference between mainstream Conservatism and the so-called Progressive party. Hope and joy seem far off dreams in an era of increasing oppression.

It is perhaps with this in mind that a collection of radical songs from across the ages, Voice + Vision: Songs Of Resistance, Democracy and Peace, is being released. Song has long been a principal tool of the Left, from the great upsurge of Leftist music-making of 1960s America, to the laments of the 17th Century English – even to today’s calls for a better world. It is a genre rich in social history, giving insight into the daily lives of those that went before us and the struggles that they faced, from bad landlords to marauding press gangs to low wages and so on and on.

In this collection of songs, we hear much of those 17th Century laments, but not so much in the way of joy, hope or cheer. On the face of it, the intention seems clearly uplifting: “songs of resistance, democracy + peace” is the tag-line, but I find much of this double CD to consist of defeatism, sorrow and loss. Is this indicative of the situation in which we find ourselves since Margaret Thatcher’s crushing of the unions and the collapse of the wider Left that followed? Even songs such as The Rigs Of The Time, often sung as a bawdy romp of a song, is presented here as a sorrowful dirge. Satire gives way to straightforward acceptance of our lot and mainstream audiences quickly lose interest.

This is an odd collection of songs in another way too. The vast majority of the album is made up of older songs, some defiant it is true, such as The Diggers’ Song, but most dour, beaten – even reproachful and, above all, English. Yet there are oddities shoe-horned in here. Both the Seegers pop up, with Peggy Seeger providing the only real moment of cheer on the whole album with her sunny rendition of If You Want A Better Life, but even these songs don’t seem too out of place in comparison to those included by Paul Robeson and The First Of May Band, both of which smack of tokenism, particularly the latter, belonging as it does to an entirely different genre of music to the rest of the album. This particular inclusion leaving the lingering whiff of a committee made up of middle class white people deciding what to put on this album and, in a desperate bid to appear inclusive, shoving on the first songs they could find by discernibly non-white voices, regardless of any incongruity.

Again this all seems oddly in keeping with our times. Hand-wringing committees fail to set the political agenda, fail to capture the popular imagination and fail to be the progressive force they purport to be. Genuine grass-roots campaigns – made up of people of all races and backgrounds – and the music that goes with them are missed by those too stuck in a different world to notice them. If this collection set out to be a mere retrospective of 17th Century English moaning in song, then none of this would matter, but these peculiar inclusions show an attempt – commendable, for sure – to bring the subject of radicalism in music bang up to date, but it fails in this attempt and the result is nothing but faintly embarrassing; like a teacher trying to be cool at a school disco.

Maybe I’m being too harsh. The intentions behind this publication are clearly admirable and there are some great songs on here. Chumbawamba‘s spirited Diggers’ Song is always stirring to hear, Poverty Knock sung by Roy Harris is a little, sardonic treasure and Paddy Ryan singing The Man That Waters the Workers’ Beer can only bring a smile to the face. Yet much of the rest of the album starts to blend into one stream of slow, depressing grief, the revival of which seems, surely, to belong to another era.

Folk music has always had an element of the sorrowful, of course, but this is also a genre of fun, of joy, of defiance and of thunder. It is also a genre of many voices not given much chance to breathe on this release. All folkies love a beautiful lament evocative of the trials of times long past, but we need to look back at our radical past not with a heavy heart for that which we have lost, but with defiance, hope and joy. We need to sing the songs of resistance, democracy and peace with fire in our hearts and victory in our minds. And if the songs aren’t there in collections such as this one, we need to find them, write them, re-write them and use them to give us back our fight.

Voice + Vision: Songs Of Resistance, Democracy + Peace is out on 13 October 2014 through Topic. More about this release can be found here.