Whether you take the chance to relive the journey, or experience it for the first time, this catalogue reissues series reveals whether they’re one of the world’s most underrated bands 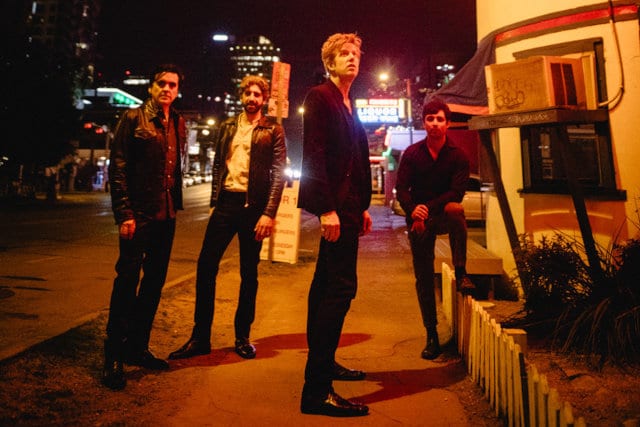 Few bands in music have been around for as long, collected as many critical plaudits and produced so many great albums as Spoon. Yet for many who could easily fall in love with them, they’ve remained just under the radar – a band that might pop up on a playlist, but never form the backbone of one.

With this new reissue campaign, the beautifully titled Slay On Cue, Spoon (in partnership with Matador) have gathered up their first seven studio albums, and their second EP, and sent them back out into the world to be reevaluated, and hopefully re-appreciated.

Spoon’s debut album Telephono and the Soft Effects EP were reissued back in July, with the two records available individually on vinyl and CD for “the first time since their original release in 1996/1997”. Next up was “the worldwide reissue of the bands’ classic albums in original editions, including A Series Of Sneaks (1998), Girls Can Tell (2001), Kill The Moonlight (2002), Gimme Fiction (2005), Ga Ga Ga Ga Ga (2007) and Transference (2010)”.

“Some of these albums haven’t been available on vinyl or CD in years, and in some places they never actually came out,” said frontman and primary songwriter Britt Daniel, although this isn’t strictly true. For one, I’ve had these CDs in my collection for years, with Discogs and eBay providing easy (but pricey) access to some of these albums in their original formats.

The extra cost, I assure you, was worth it – but these new editions are beautiful enough to warrant paying for them all over again. The first two releases, the debut album Telephono and the Soft Effects EP, are best enjoyed as a pair, with the first offering a glimpse of a raw, punk-inspired indie band in thrall to the influences, and the second a snapshot of a band transitioning into something a bit more refined.

Telephono, which wears its Pixies/Wire/Sonic Youth influences on its sleeve, is an enjoyable – if a little simplistic – collection of brash, caustic rockers that clearly demonstrates a band with significant potential. The stylistic flair of Plastic Mylar and Towner contrasts with the raw power of Claws Tracking and Dismember, mimicking the harsh/sweet dynamic of a Pixies record. The whole album is made up of these dichotomous, alternating moods, but ultimately draws inspiration from too narrow a field to ever really sound unique.

With Soft Effects, the band began to come into their own, with the core central duo of Britt Daniel and drummer Jim Eno beginning to experiment with a more refined, controlled take on the messy sound of their debut, losing none of their elemental rock fury in the process. Mountain Of Sound is the track that best highlights their evolution: where once Daniel littered his tracks with buzzing riffs or crackling acoustic strums, here he opts for the Miles Davis approach of leaving deliberate gaps in the tracks to emphasise the hot moments.

1998’s A Series Of Sneaks is the album that first cemented their cult status, eventually winning plaudits and accolades from tastemakers like Pitchfork Media, Treble and Magnet, who all declared it (at one point or another) one of the best albums of the 1990s. On ASoS, Daniel’s songwriting and sound design seems to go up three of four notches, and he offers a comprehensive overview – a summation of – the kind of art punk first pioneered by bands like The Fall, Gang Of Four and Siouxsie & The Banshees at the end of the ’70s. It’s a sharp, angular sound that does away with much of the roughness of their earlier work, and adds a great deal of finesse. The album has a tonne of highlights, from the fan-favourite Metal Detektor, to the pure thrills of Car Radio and Utilitarian. Of all of the albums reissued as part of this campaign, it was this one that gave me the biggest sense of wonder, and it’s definitely aged better than either of the earlier works.

If it was that album that earned them cult status, the next two proved that they are one of the greatest bands on the planet. With 2001’s Girls Can Tell and 2002’s Kill The Moonlight, Daniel and Eno produced two of the finest records of the decade, with each offering a level of subtlety and power that they’d never once managed to achieve before. Their music, which had always been an arty kind of post-punk, here became gold-standard indie rock, with a heavy focus placed on melody, and a keen ear for regular song structures. With these two albums, they began creating exceptional songs – Everything Hits at Once, The Fitted Shirt, Chicago At Night, Small Stakes, The Way We Get By, Paper Tiger… All now classics in the Spoon canon. If you’re after an entry point to the staggering Spoon canon, either of these exceptional albums would be a perfect start.

The run continued on 2005’s Gimme Fiction, which again gave the band several highlight-reel moments, and laid the foundation for the band’s looser, rockier second act. The swaggering bombast of The Beast and Dragon, Adored showcased their talents as muscular art-rockers, while I Turn My Camera On started a sound the band would pick up throughout the  rest of their career to date, most recently with the excellent Can I Sit Next To You from 2017’s Hot Thoughts record (probably my favourite album of theirs so far). Other highlights are plentiful: I Summon You, The Two Sides Of Monsieur Valentine and My Mathematical Mind are perennial favourites, and highlight just how far Daniel and Eno had come as songwriters by that point.

Despite being a fan favourite, 2007’s Ga Ga Ga Ga Ga is the first album where you could realistically accuse Spoon of taking it easy, but this gamble worked out in their favour. The critics had finally caught up with them (again), and went around declaring the album as a masterpiece (five stars on Allmusic!). The hooks are simple, the tracks are decent and the choruses are memorable. All of the components of their brilliance are there, apart from the heat and power of some of the earlier works. It could just be me, but I don’t feel it’s as strong as its immediate predecessor, or as interesting as its follow-up, 2010’s Transference.

Often seen as the black sheep of Spoon’s second act, Transference is a woolly, loose affair that zigs where Ga Ga Ga Ga Ga zags. Unlike its predecessor, which offered instant gratification, Transference is comprised of demos and experiments. When this formula works – as on The Mystery Zone, Who Makes Your Money and Got Nuffin – it actually manages to bring a freshness to Spoon’s sound that they had been lacking, and a rough edge that they hadn’t had in almost a decade.

As a reissue campaign, this went under the radar somewhat, owing to the events of this woeful year. But these new issues will remain, and they will stand as testament to the diversity, depth and splendour of Spoon’s catalogue. Their two most recent albums, They Want My Soul and Hot Thoughts, are definitely also worth your time. The former is their greatest album by some margin, and the latter is an undeniable step into uncharted territory for the band. Did I mention that Hot Thoughts is my favourite Spoon album?

It’s very rare that I feel at liberty to recommend that people immediately go out (or stay in) and order albums, but each and every single item in this reissue campaign will bring light to your year, will bring joy and endless replay value. Spoon may very well be the most underrated band in the world, but they’re also one of the best. Slay On Cue offers you the chance to relive the journey or experience it for the first time, and that makes it one of the most essential reissue campaigns ever. In the words of Britt Daniel, “If there’s anything you want/ Come on back, cause it’s all still here.”

Spoon’s Stay On Cue catalogue reissues are out now in association with Matador. Further information can be found here.