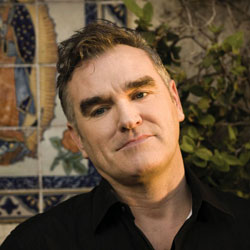 Another year, another Morrissey album.

Years Of Refusal is his 30th in an extraordinary 25-year career, if you include all The Smiths’ releases, his solo output and live albums and compilations.

Len Brown, a former NME writer turned television producer, has interviewed Morrissey more times than any other journalist. Here he takes stock on the Moz’s longevity and his latest work…

Years Of Refusal. What can the most prolific man in pop mean? Refusal to play the music industry game? Refusal to be specific about his sexual preferences? Refusal to apologise for his views on immigration? Or simply an ongoing refusal to keep his infamous bigmouth shut? Wherever his intentions lie, it’s clearly a refusal to play it safe or, god forbid, give the people what they want.

As he once admitted to me, “people find me enormously irritating. If you don’t have 100 percent passion for every move I make then I’m the most irritating person you could hope to hear of. I know this because people write and tell me…It’s a tremendous accolade.”

But Years Of Refusal? Where on earth does he get these strange titles from? Most artists seem content to pick an everyday saying, a cliche or a bad pun, slapping it on their long-playing collections in an effort to create a sense of unity, perhaps even a whiff of concept. Then there’s a whole host of studio albums un-inspiringly named after the artists responsible: Led Zeppelin, The Stone Roses, The Libertines…

True, Morrissey’s 1984 debut album with the great Manchester guitar band The Smiths was obviously called The Smiths, but this choice wasn’t actually as safe as it seemed. The band’s name had been picked (by Morrissey and his songwriting partner Johnny Marr) in tribute to their heroine Patti Smith and also inspired by Emlyn Williams’ account of the Moors Murders, Beyond Belief. “The Smiths”, who shopped the child murderers, were Myra Hindley’s sister Maureen and her husband David Smith.

Since going solo in 1988, Morrissey’s own album titles have arguably become increasingly controversial or sexually unconventional, in step with the outspoken anti-establishment beliefs of his Victorian hero, the playwright and agitator Oscar Wilde. Viva Hate in “Nineteen Eighty Hate” echoed the political climate of 1888 when social unrest was growing, East End natives were revolting and Jack The Ripper stalked the fog-bound Whitechapel streets. (The Ripper crimes, inspiration for a Morrissey track, influenced Wilde’s The Picture Of Dorian Gray.)

Bona Drag, for example, was named after the underground gay slang “polari” (also spelt “palare”, as in Morrissey’s single about male prostitution, Piccadilly Palare); part in tribute to the pioneering camp characters Julian and Sandy in the mid-Sixties radio show Around The Horne, but also encouraged by Neil Bartlett’s book Who Was That Man? A Present For Mr Oscar Wilde, an extraordinary comparative account of homosexuality in the 1880s and the 1980s.

1994’s solo classic Vauxhall & I is assumed to have been a celebration of the classic British film, Withnail & I (featuring Richard Griffiths as the Wilde-ly overweight and outrageous Uncle Monty: “I mean to have you, boy, even if it must be burglary”) although one barely-evolved critic dared suggest that Vauxhall Cavalier might also be rhyming slang for “queer”. Maybe Your Arsenal was simply a comedic title, in a Carry On, bawdy-seaside-postcard way?

The influence of Oscar Wilde on Morrissey grew even stronger in the early-to-mid-1990s, reflecting the life of the playwright exactly a century earlier. Most critics suggest Kill Uncle was inspired by the ’60s film, Let’s Kill Uncle, but it’s also the theme of Wilde’s play The Duchess Of Padua, centering on a plot to assassinate a treacherous uncle as in Richard III and Hamlet. In a similar vein, the pugilistic Southpaw Grammar, following the Boxers single in 1995, marked the centenary of Wilde’s destruction in 1895 at the hands of Lord Alfred Douglas’ father, the Marquess Of Queensberry, originator of the rules of boxing.

Against the backdrop of his own damaging court cases with former Smiths’ drummer Mike Joyce, in the mid 1990s Morrissey struggled to complete Maladjusted – Oxford Dictionary: “unable to adapt to or cope with the demands of a social environment” – before disappearing into exile and depression at the end of the 20th Century.

I once asked Morrissey about his stressfully high level of productivity and wondered how he’d managed to keep it up for so long? He replied, “Throughout the ’80s it was so constant – then for a slight second it looked as if there was a lull – let’s face it, there was a very attractive lull – so people started saying ‘ah-ha, the acrobat falls…’ And yet, if I was turning them out like a cracker factory people would say, ‘Why doesn’t he go away? Why doesn’t he have a slight rest? Pass me that bread knife!'”

The ’90s lull lasted for seven long winters. Frankly, as one of the journalists who’s followed him closely over the years, even I had begun to give up on Steven Patrick Morrissey in the 21st Century. In fact, when I met up with him again in Manchester in the summer of 2003 – for a glass of Guinness in The Grapes pub, owned by Liz Dawn (Vera Duckworth, late of Coronation Street) – I was astonished to discover he was planning a comeback.

You Are The Quarry received great critical acclaim in 2004, selling over one million copies worldwide and earning him the accolade “The Mozzfather” from legions of disciples such as Franz Ferdinand, The Libertines and The Killers. Again the album’s title seemed to have Wildean origins; in one of Morrissey’s favourite books, Richard Ellmann’s Oscar Wilde, Chapter 18 is titled Doom Deferred and begins with the sentence: “The quarry was about to fall”.

In 2006, Ringleader Of The Tormentors confirmed Morrissey’s glorious return to the spotlight. This time the album had been created in his new city home of Rome, where Wilde had pilgrimaged over a century earlier. Produced by Tony Visconti, who’d masterminded the great ’70s albums by his childhood heroes Bowie and Bolan, Ringleader Of The Tormentors consolidated Morrissey’s Latino following in America and also led to him being voted second in the BBC’s Greatest Living Englishman poll behind David Attenborough, but ahead of Paul McCartney.

Now finally out after being delayed six months following the tragic death of his producer Jerry Finn, Years Of Refusal will be Morrissey’s tenth solo studio album and features strong new songs including Something Is Squeezing My Skull, All You Need Is Me, the auto-sexual I’m OK By Myself, Mama Lay Softly On The Riverbed (very Virginia Woolf), I’m Throwing My Arms Around Paris (Wilde’s last resting place), the ominous-sounding Black Cloud and – with Morrissey approaching 50 in May – the appropriate One Day Goodbye Will Be Farewell.

My view is that the new album title breaks with recent tradition and comes from a completely Wilde-free source. Back in 2004, when he curated the Meltdown Festival at London’s Royal Festival Hall, Morrissey had approached the great black American writer Maya Angelou to appear. He’s featured her poem No No No No on the soundtrack before his solo shows at the end of the Millennium.

So, maybe, the title of his new album has been inspired by Angelou’s famous poem Refusal, which ends with the moving lines:

“I defy my body’s haste. Without the promise, Of one more sweet encounter, I will not deign to die.”

Len Brown’s book Meetings With Morrissey is out now through Omnibus Press.