Black Francis and co’s space-themed third, released just a year after their second, became their only Top 3 album. Is it their best? 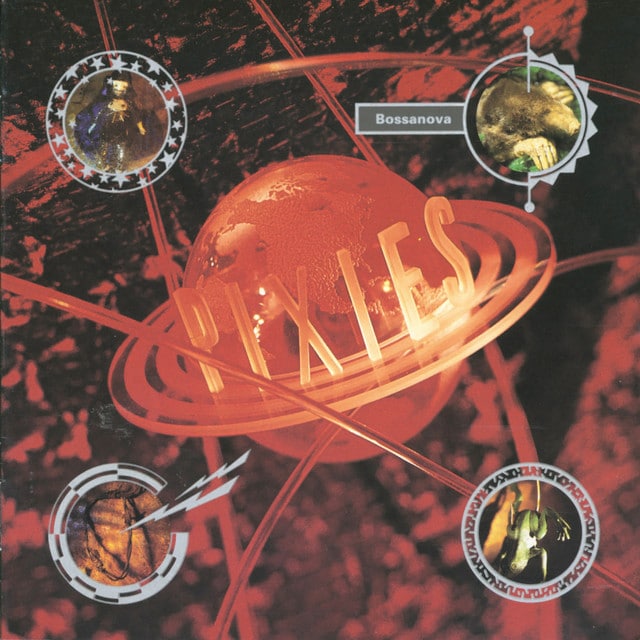 Pixies‘ third album Bossanova has just turned 30, a landmark noted by a just-released 30th Anniversary Edition. It seems like only yesterday that we were celebrating the 25th year of its existence, despite the evidence pointing quite convincingly to the fact that it has most definitely been a good five years since we trotted out the cake, balloons and streamers.

Yet here we are, contemplating the grey hairs, expanding waist lines and wondering where the time went, whilst listening to an album that we’re quite familiar with. Even with fading hearing and the thrum of high blood pressure pulsing through our ear drums, there’s no doubting that Bossanova is a great album. But it might not have been the album that Pixies fans wanted when it first appeared back in 1990. After all, the band had set the bar phenomenally high with their first two efforts, Surfer Rosa and Doolittle (three, if you include Come On Pilgrim) and for some this new, almost shiny version of the band seemed at odds with what Pixies were all about.

Of course not everyone will be coming to the album 30 years later. For some, this will be the first time they’ve encountered the album. Despite the received wisdom that this is where the Pixies started to go a bit wrong, the truth is that Bossanova is a good, solid record which, considering its genesis, is rather surprising. Written and recorded in a very short space of time, the band were coming off the back of the success of Doolittle and had studio issues to deal with, alongside the weight of expectation.

Having finished their touring for Doolittle in January 1990, they set about recording a follow up just a month later. Almost every song on the album was written in the studio, which meant that not only was the band working quickly, but there was very little in the way of wastage. Lyrics were apparently scribbled on the back of napkins shortly before Black Francis recorded the vocals, there was not much in the way of rehearsal and practically nothing in the way of demos. This perhaps goes some way to explaining why this particular reissue is somewhat light on additional content. For long term fans of the band, the one lure is the chance to own a copy on red vinyl and that there’s 16 page booklet that was “previously only available with the initial UK pressing”.

This one, longstanding Pixies fans and collectors, is red. It would seem that this particular anniversary has been deemed barely worthy of celebration if the repackaging is anything to go by, and yet, there is much to celebrate about Bossanova. It offers some of the band’s finest tunes and a clarity of sound and vision that presumably came about due to the rushed nature of its creation. There’s very little of the skipping across forms of attack and tonal shifts on Bossanova, it is, in essence, a fairly straight up rock record. Kicking off with a cover of The Surftones‘ Cecilia Ann, the band wastes no time in establishing the surf guitar twang that flavours much of what follows. That they follow it up with the raucous scream and rush of Rock Music is perhaps not surprising. Little more than a brief but invigorating explosion, it is one of a number of songs that feel bashed out quickly, snapshots of where the band was at at that moment of time. There’s no exposition, just quick blasts that are basically lightning in a bottle.

That’s not to say that some of the more spiky, mysterious, moments don’t find a home on the album. Velouria’s velvet love pop poem, with its gloriously wonky theremin, starts to hint at a sci-fi theme that begins to take over as the album progresses. Black Francis’ lyrics are as open to interpretation as always, and the likes of Is She Weird, The Happening and Allison give pause for thought whilst also embracing the themes of the album. For the most part though, it does feel a little like Pixies more abrasive and awkward elements have been tempered somewhat. All Over The World possesses many of those more angular moments (as does the constant veering of The Happening), but they’ve been softened slightly and given a rock glaze that until this point hadn’t been applied to the band. Ana is a cute and dreamy song, as sparse as it is beautiful. Dig For Fire retains the band’s ability to marry Black Francis’ spoken word tales to a truly unique pop sensibility. Closing track Havalina is almost ghostlike with its spectral vocals drifting over a basic guitar line and shuffling drum pattern. Such is the smoothing off of the edges, that when the scratchy droning tones of Down To The Well begin, it’s not hard to wonder just how the song might have sounded had it been written just a couple of years earlier.

Bossanova then is a sound of a band in transition, still ploughing a remarkably fertile furrow. Changes are afoot, but not to the detriment of the band. It’s fair to say that it’s an album that deserves a little more love than it receives, something that it could be argued is reflected in the depth of this reissue. Whatever colour it is, it’s still a classic album, even if this anniversary edition tells us more about the marketing of music as a commodity than it does about Pixies and their third album.

Pixies’ Bossanova (30th Anniversary Edition) is out now through 4AD. Further information can be found at pixiesmusic.com